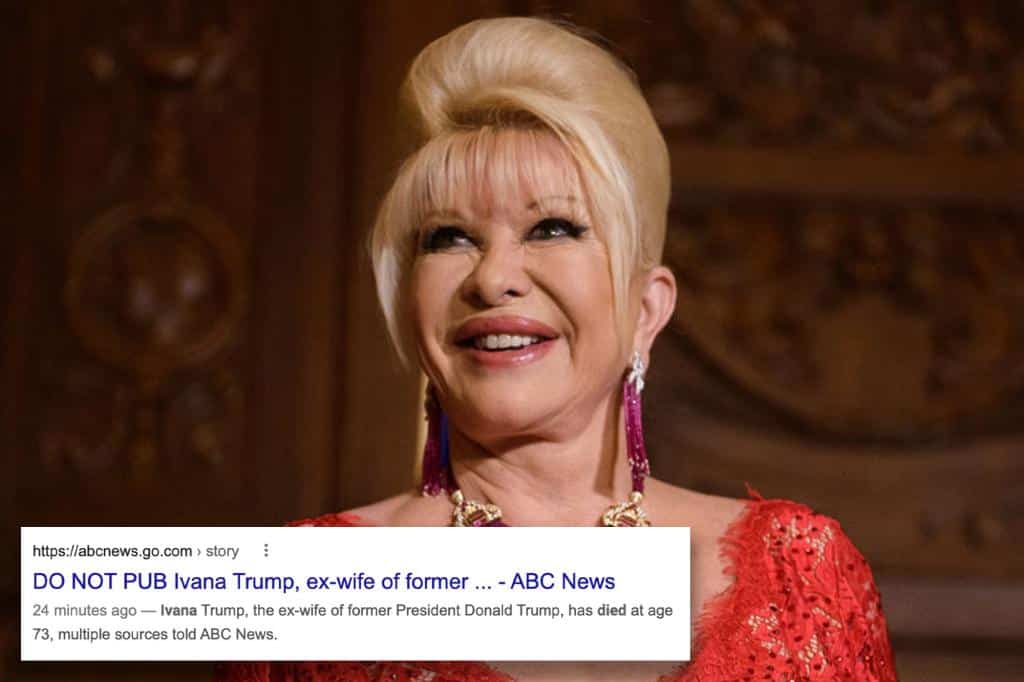 ABC News mistakenly published a draft of its report on the death of Ivana Trump on Thursday, confusing readers and creating a viral moment on Twitter.

The media clamored to quickly spread the news about the passing of Ivana Trump, the first wife of former President Donald Trump, on Thursday night.

Apparently ABC News was so anxious that it mistakenly included pre-script notes in its report with the headline: “DO NOT PUBLISH Ivana Trump, Ex-Wife of Former President Trump, Dies at 73.

In the news business, the words “DO NOT PUBLISH” indicate that a story is not yet ready for publication.

The error initially catapulted the ABC News story to the top of Ivana Trump’s obituaries in Google search. While the obituary was quickly edited on ABC’s website, it remained on Google for nearly half an hour after the network broke the story, according to Mediaite.

The headline quickly trended on Twitter as people outside the media business wondered what “DO NOT POST” meant in an article about the death of Ivana Trump, mother of Ivanka, Eric and Donald Trump Jr.

“What do you mean @ABC? not pub? You knew it was going to happen!” tweeted a puzzled user.

A group of reporters took to Twitter to explain that the media often write obituaries for notable people who are elderly or battling illness.

“Oof, someone forgot to remove the ‘DO NOT PUBLISH’ note in Ivana Trump’s obituary published by ABC News,” one user wrote. “For those who don’t know, publications often have pre-written obituaries ready for notable people where they can add the date and any new information when the person actually dies.”

Another Twitter user mocked “conspiracy theories brewing” about ABC’s blunder, explaining that ABC simply forgot to remove the “DO NOT PUBLISH” headline before publishing the obituary.

As of Friday morning, the correct title, without “DO NOT POST”, now appears in Google.