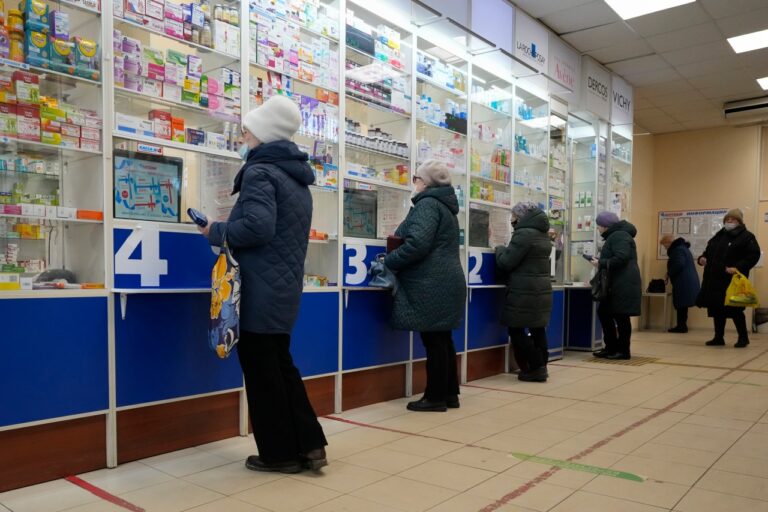 First came the warnings, in messages among friends and families and on social media, to get supplies on vital drugs in Russia before supplies were hit by crippling Western sanctions over the invasion of Ukraine.

Then some drugs indeed became more difficult to find at pharmacies in Moscow and other cities.

“Not a single pharmacy in the city has it now,” a Kazan resident told The Associated Press in late March about a blood thinner her father needed.

Experts and health authorities in Russia say the drug shortages are temporary – due to panic purchases and logistical problems for suppliers of the sanctions – but some remain worried that high-quality medicines will continue to disappear in the Russian market.

“There will most likely be shortages. “I do not know how catastrophic it will be,” said Dr. Alexey Erlikh, head of the heart intensive care unit at Moscow Hospital no. 29, and a professor at Moscow-based Pirogov Medical University said.

Reports that Russians could not get certain medications in pharmacies began to surface in early March, shortly after Moscow unleashed a war on Ukraine, leaving extensive sanctions Russia increasingly isolated from the rest of the world.

Patient’s Monitor, a patient rights group in the Russian region of Dagestan on the Caspian Sea, began receiving complaints in the second week of March.

Ziyautdin Uvaysov, head of the group, told Associated Press he had personally checked at several state-run pharmacies in the region about the availability of 10 most sought-after medicines and “they did not have a large number of these.”

Uvaysov added that the pharmacies replied when asked about when supplies would be replenished, “there is not and it is unclear when it will be.”

Despite reassurance from authorities that stockpiling was to blame for the rapid emptying of shelves, shortage reports continued throughout March.

Vrachi.Rf, one of Russia’s largest online medical community, interviewed more than 3,000 doctors in mid-March, saying they were deficient in more than 80 medications: anti-inflammatory, gastrointestinal, anti-epileptic and anticonvulsants, as well as antidepressants and antipsychotics.

About a dozen people contacted by the Associated Press in various cities at the end of March said they had been searching for days for certain thyroid medications, types of insulin or even a popular painkiller for children. Some said they could not find them at all.

Russian Health Minister Mikhail Murashko has repeatedly assured that the availability of drugs is not a problem in the country and blamed any shortages on panic purchases. He said the demand for certain drugs had increased tenfold in recent weeks, and he urged Russians not to stockpile the medication.

Experts agree that panic buying has played a role in creating drug shortages.

“People rushed to stockpile, and in some cases stocks that were supposed to last a year or a year and a half were bought out within a month,” said Nikolay Bespalov, development director at RNC Pharma Analytical. company, told Associated Press.

The expert stressed that the logistical issues have been largely resolved, but panic purchases, caused by fears that foreign companies will stop stockpiling, could fuel shortages for some time to come.

“It is clear that until the emotions subside, it will continue,” Bespalov said.

Local news sites – from Vladimir, just east of Moscow, to the Kemerovo region in Siberia – reported shortages of various medications in the last days of March amid ongoing panic buying.

However, Russia’s health watchdog Roszdravnadzor said in a statement on Friday that “the situation on the drug market is gradually returning to normal, panic purchases of pharmaceutical products are declining.”

Erlikh, the cardiologist, pointed to pre-existing problems with quality medicines in Russia, which according to some estimates import up to 40% of his medicines.

After the authorities launched an import substitution policy to counter sanctions over the 2014 annexation of Crimea and to promote its own medication over foreign-made products, shortages of certain imported drugs became a problem.

The policy set out a wide range of preferences to Russian businesses and ultimately made it unprofitable for foreign pharmaceutical companies to supply some of their expensive, high-quality medicines to Russia.

In 2015, state procurement of medicines for hospitals and state-funded clinics, which account for up to 80% of Russia’s pharmaceutical market, became subject to the “three’s a crowd” rule, which excluded foreign businesses if at least two Russian companies bid. for a contract.

The government has also continued to add more medicines to the list of “essential medicines” – a register of more than 800 essential medicines, for which the authorities have set mandatory – and relatively low – prices. Companies can apply once a year to change the set price, but the process is long, very bureaucratic and does not lead to a guaranteed result.

“Of course, if there is no original medication, a generic drug is better than nothing. But it is a situation of (deliberately) lowering the bar, it is not a good way to live, ”he added.

Follow Associated Press’s coverage of Russia and Ukraine at https://apnews.com/hub/russia-ukraine