Early Sunday morning (May 25) will be a delight for early risers as the two brightest objects in the night sky approach each other. 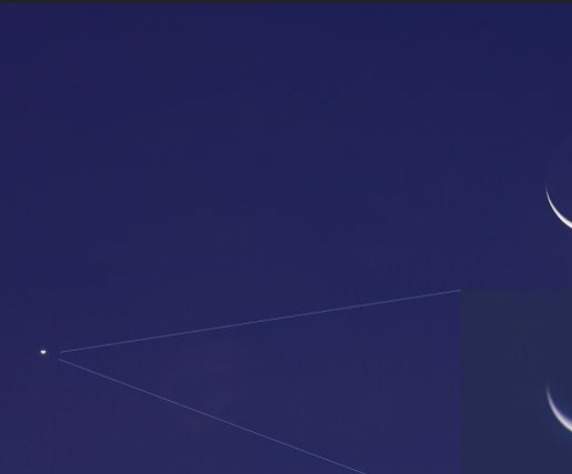 Sunday morning (May 25) will be a delight for early risers as the two brightest objects in the night sky will approach each other to form a beautiful celestial panorama.

Around 4:30 a.m. local time, you can see a thin, waning crescent moon that’s only 12 percent illuminant when looking less to the east. The brilliant planet Venus will be 2 degrees below and to its left.

Your fist held at arm’s length measures about 10 degrees, so the Moon and the planet would be separated by only a finger’s width. By the time sunrise comes about an hour later, this fascinating pair will still be visible quite low—about a fifth of the way from the eastern horizon to the point directly overhead (the zenith).

At first glance you might think that it is Venus, which shines with a bright and steady silverlight. In fact, in very dark places, this night lighthouse can cast a distinct, though faint, shadow. At magnitude -4.0, Venus is currently 11 times brighter than Sirius, the brightest star in the night sky.

Here’s a question you might want to ponder on early Sunday when you look at both: Which of the two is brighter?

But Venus still hasn’t outlasted a thin piece of a moon, which is just 3 1/2 days away from its new phase.

Actually, the Moon is 30 times brighter than Venus. Venus may appear bright because all of its light is condensed into a single point on the sky, while the Moon’s light is spread over a much larger area.

Keep your eyes on the Moon and Venus when the sky is bright. The moon will be easily visible even after sunrise. And using the Moon as your benchmark, you should have no problem seeing Venus as well; The planet will appear as a small white spot against a blue day sky. See how long you can follow them during the day.