Earth at least 1880. The sixth warmest July recorded since 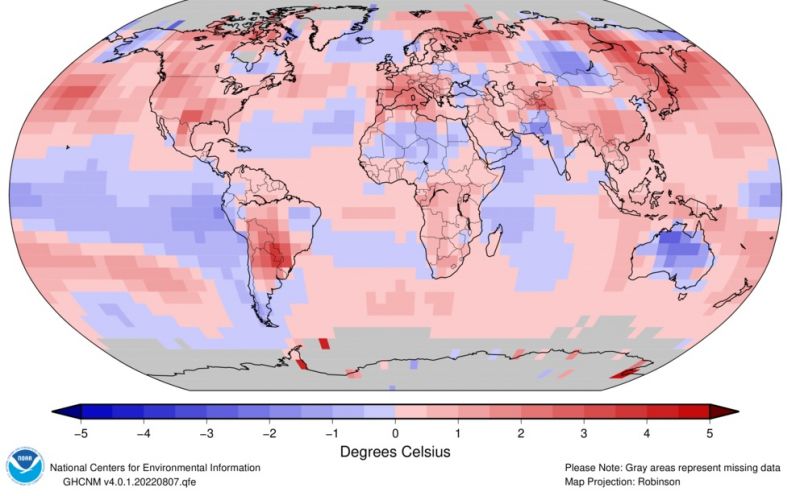 According to the latest monthly weather report from the US agency NOAA (National Oceanic and Atmospheric Administration), the last month became the sixth warmest July on Earth’s surface since the start of the historic series of global temperatures in 1880.

Reports collected by Servimedia show that the global surface temperature in July this year was 0.87 degrees above the 20th century average, which is 15.8 degrees. Here are the five warmest Julys ever recorded since 2016.

In addition, the previous month became the 46th July in a row and the 451st month in a row where temperatures on the planet’s surface were higher than the 20th century average. December 1984 was colder than average for the last time.

An unprecedented heat wave broke heat records in July in many countries across Europe and the continent, including Spain, Italy, Portugal and the United Kingdom.

Sea surface temperatures were above average in the Gulf of Mexico and parts of the north, west and southwest Pacific, as well as the eastern Atlantic and Indian Oceans. Overall, the record heat in July covered more than 7.3% of the world’s surface.

The previous month was the second warmest July in North America, third in Asia, fourth in South America, sixth in Europe and 13th in Africa, while it was the coldest in Oceania since 2012.

By countries, it became the hottest July ever in Spain and Portugal, third in the United States and France, fourth in New Zealand and seventh in the United Kingdom (which reached 40 degrees for the first time).

July was unusually warm in Antarctica, according to the National Snow and Ice Data Center (NSIDC). Temperatures in the Weddell Sea were three to seven degrees warmer than normal. Temperatures across most of the continent and the east coast, except the northern Ross Sea, were one to four degrees above average, which was about four degrees cooler than normal.

from January to July

On the other hand, the combined average temperature of the planet’s land surface and oceans between January and July of this year was the sixth highest for the period, as are records dating back to 1880, according to NOAA.

Thus, it was 8.86 more than the 20th century average. The five warmest January–July periods have come since 2015. According to NOAA’s National Center for Environmental Information (NCEI), this year is likely to end on the top 10 warmest on record, but that’s only a 10.5% chance. Top five hottest places since 1880.

The period from January to July this year was the second warmest in Asia and the nine warmest in Europe, the Caribbean and Oceania. Africa, South America and North America experienced warmer-than-normal heat in those seven months, although that time was not among the 10 warmest months of their historical series.