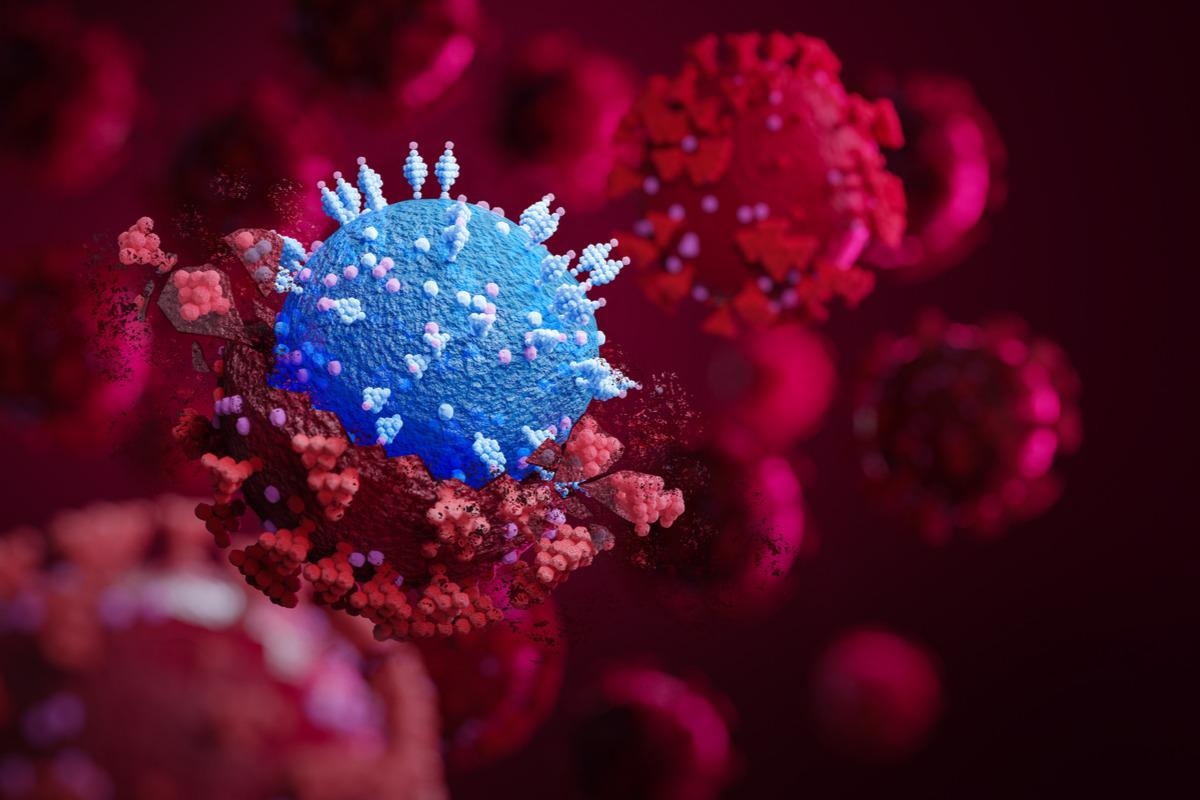 The ongoing coronavirus disease 2019 (COVID-19) pandemic has caused more than six million deaths in nearly 500 million cases – although several tens of millions have gone undiagnosed and undiagnosed. The causative agent is severe acute respiratory syndrome coronavirus 2 (SARS-CoV-2), which emerged in Wuhan in December 2019 before spreading to all parts of the world.

The virus has mutated into several forms, some with greater pathogenicity and/or immune evasion characteristics. A new preprint explores the contribution of these mutations to viral pathogenicity and transmission.

SARS-CoV-2 contains a ribonucleic acid (RNA) genome composed of open reading frames (ORFs) that encode replication proteins, structural proteins, and helper proteins. The replication gene is located at the 5′ end by ORF1A/B, followed by four structural genes for the spike, envelope, membrane and nucleocapsid components of the virus.

In between these genes come helper proteins that are unique to each virus family. These are, in one way or another, helpful in the pathogenesis of COVID-19. For example, the interferon signaling pathway triggers antiviral and/or inflammatory responses.

However, SARS-CoV-2 ORF3b inhibits this pathway, whereas ORF7a inhibits the interferon-stimulated gene (ISG) BST2. Similarly, translocation of STAT1 protein into the nucleus, driven by interferon expression, which regulates ISG expression, is antagonized by viral ORF6.

Virus types have been studied mostly in the context of spike mutations as this protein undergoes viral attachment and entry into target host cells. The spike interacts with the host cell via the angiotensin-converting enzyme 2 (ACE2) receptor, and is the immunodominant antigen. Mutations of this gene have been associated with immune evasion in some cases.

In current preprint, published at biorxiv* Server, the researchers looked at the role played by helper proteins using a synthetic genomics assembly technique. They focused on deletions in ORF3a/b, ORF6, 7a/7b, and 8 in the parental strain of the virus, first examining the effect on replication fitness in vitro. Next, they looked at how these affected the pathogenesis of SARS-CoV-2 infection in a mouse model.

They also created recombinant spike protein variants on the WA-1 backbone. These variants were similar to alpha, beta and gamma spike variants and were compared with the parental spike protein for replication fitness and pathogenesis in mice.

What did the study show?

The scientists found that the adjuvant gene deletion of ORF3a and ORF3b (WA-1ΔORF3a/b) reduced the replication fitness of the virus in mice. The deletion-virus-infected mice did not lose as much weight as controls infected with the parental (WA-1) strain, and had much lower viral loads in lung tissue at days 2 and 4. This confirms earlier research on this deletion.

However, in contrast to prior reports of attenuated clinical effects with deletion of ORF7a, ORF7b, and ORF8 in mice, there was no effect on viral load in the present experiments. This may be due to differences in infectious doses or to different mouse strains.

WA-1ΔORF3a/b also led to lower expression of inflammatory cytokines and chemokines than WA-1 infection, probably due to lower replication levels. On neutrophil recruitment, similar downstream effects were observed as expected. Upregulation of the I14 and I15 genes triggers a type 2 T helper cell (Th2) response, which is seen in severe forms of COVID-19.

This is not consistent with the less severe clinical phenotype of WA-1ΔORF3a/b. A possible explanation for the upregulation, rather than the expected downregulation of these cytokines, could be their association with tissue repair, which is occurring earlier in these mice due to more rapid virus clearance.

Spike variants introduced into the WA-1 backbone revealed no significant changes in their replication, but viral load, as measured by viral titer in the supernatant at 72 h, compared with the gamma spike variant was less. type.

No difference was found in weight loss, virus load or brain titer of the other two spike variants on WA-1 compared with the real variant in K18-hACE2 mice. However, with BALB/c mice, the Beta Spike-WA1 strain produced an attenuated phenotype compared with the Beta variant, whereas with the Alpha Spike-WA1 strain, the lung viral titer decreased by day 2 without any difference in weight loss. increased in

In both mouse strains, the greatest difference was observed with the Gamma Spike-WA1 versus the Gamma variant, with the former showing a more severe phenotype in terms of weight loss and lung titers than the Gamma variant. In K18-hACE2 mice, there was a trend towards higher viral titers in the brain, and higher RNA concentrations, falling below significance.

Lung cytokines and chemokines also showed differences at days 2 and 4, again most significantly in the gamma spike-WA1 strain compared to the gamma strain. Neutrophil recruitment genes were most affected, with CXCL5 showing the greatest increase in expression. Interestingly, this gene is a major neutrophil attractor in COVID-19 and is implicated as a cause of inflammation.

Genes such as thpoC and i15 were downregulated. Since these lead to CD4+ T cell differentiation, this finding may indicate that WA-1 non-spike genes inhibit this pathway and that this inhibition is lost with the full gamma variant.

The latter also reflects a loss of interferon antagonism mediated by non-spike genes, as gamma-infected mice had higher levels of gamma-interferon in the lungs than gamma-spike-WA1 mice. This runs in contrast to the higher lung titer observed later. However, this gap settled from day 4.

What are the implications?

,This work demonstrates that SARS-CoV-2. ORF3a/b have substantial roles in the pathogenesis and host responses ofThus, viral variants, and especially mutations in the helper protein of ORF3a, seem to contribute to the pathogenesis of COVID-19 with variants. Both beta and gamma variants had ORF3a mutations, and these are found in the new variants. , indicating their importance for replication fitness and transmission.

Together, this may ensure that the virus continues to adapt with improved replication fitness, transmissibility, and pathogenicity.

bioRxiv publishes preliminary scientific reports that are not peer-reviewed and, therefore, should not be considered conclusive, guide clinical practice/health-related behavior, or be regarded as established information.

How does the brain react when forced to explore novelty?

Hand, foot and mouth disease: Adults can get it too

Studying the three-dimensional structure of proteins through X-ray diffraction