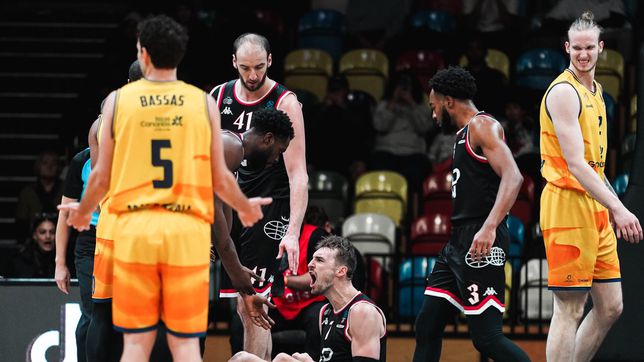 Gran Canaria recorded a tough and balsamic victory against a fierce London Lions in the United Kingdom this Tuesday, which pitted it against the ropes. With a high dose of muscle, however, the success from abroad at the end allowed the Canarian team to add its sixth victory in the Eurocup (57–60).

The versatility of American John Shurna (13 points and 3 rebounds) matched the physical performance of Senegal’s Khalifa Diop. (3 points, 9 rebounds and 2 blocks) Allowed to stop the push of local starsIn this case American Sam Decker (18 points) and Hellenic interior Costa Koufos (other 15 and 11 rejections).

With this win, the Claretian team also guarantees its ticket to the next stage of the Eurocup with 10 wins and 2 losses, as well as maintaining the best balance of the entire competition, allowing it to have a field factor in all knockout matches. Options are available. If he is able to maintain this first place in the regular stage.

Jaka Lakovic’s team started well, especially with shots from outside. Brusino and Bassas stunned the Londoners with a 2–8 start. Ryan Schmidt’s men brought pace and physicality with changes from Sam Decker and Kosta Koufos making the score 9–8, but again Gran Canaria ended the first quarter with a 2-9 run (11-17).

In the second round, the local team took the game to their turf, turning it into a rough runner.

However, failures multiplied in both areas, significantly reducing offensive flow in the two hoops. but in the end, Shurna and Slaughter’s wrists gave oxygen to the Canaries, who ended the contest with a six-point lead (26-32) at half-time.

Already on the restart, Brusino and Slaughter returned to charge to increase the distance from the line of three, eliminating an opponent who had found the ideal equation to level the dispute, but Gran Canaria was in charge of curbing local enthusiasm in an instant (26-39).

only decker emerged in the middle Very poor percentage of London Lions (18.2%) in triples by the third quarter With his sting and piercing (40-51).

Double technical foul by Frenchman Damien Inglis in the last period It was quite a short circuit for Gran Canaria, which saw the rival gradually reduce his advantage, Joe went up 11 with five seconds to go before facing a final ten minutes of struggle to reach 57–58.

in that tight final stretch, Two free throws by Brusino set up a more than agonizing victory for the Yellows (57–60).