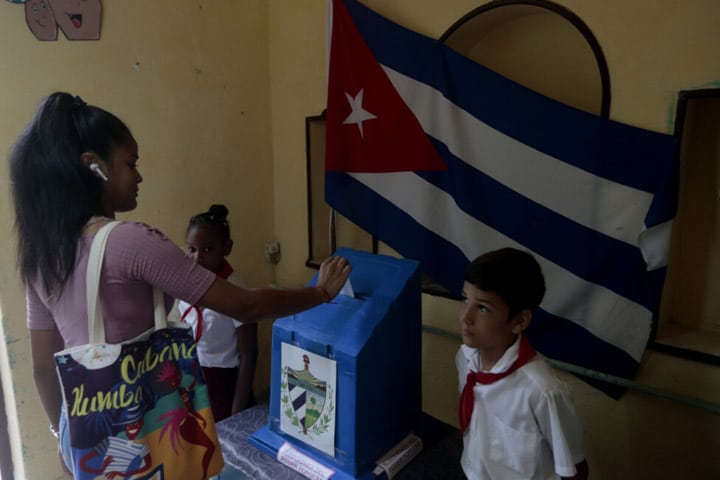 Havana, November 30.- Neutrality in local elections in Cuba confirms a growing lack of civic interest towards established representation and participation mechanisms, in contrast to the policy of increasing regional autonomy and management of endogenous development.

In Sunday’s 27th election, 68.58% of the 8.3 million Cubans authorized to do so voted, according to the National Electoral Council, to elect 12,427 municipal representatives for the five-year term set by the 2019 Electoral Law.

The representative (council) has other constitutional functions to promote community participation in the management of their problems; Also informing the municipal administration about the views, needs and difficulties of their constituents and working on their solutions accordingly.

Of the 31% of the total electorate who did not go to the polls, add more than 10% who cast a blank ballot or canceled the vote, record figures for this Caribbean island country with a socialist political system where presence was reported years ago. The turnout rate exceeded 90-95%.

In the elections five years earlier, 89.02% of the electorate voted, and just over 8% of the votes were blank or invalid.

During the most recent electoral experiences, the referendum on the 2019 constitution and the new Family Code, approved on 25 September, saw voter turnout of 90.15% and 74.01%, respectively.

“I didn’t vote, as I didn’t in the last elections. I have nothing against the proposed ones. They have more or less similar biographies, but they don’t say anything about the future, what they will do to change the neighborhood,” Mercedes, a 55-year-old accountant living in Havana, told IPS, who asked for his last name. should not be used.

The law prohibits proselytizing campaigns for any candidate and only biographies are posted in public places so voters can know relevant aspects of their student and work histories.

Review and renewal of mechanisms and functions in the popular power system seems to me to be an urgent task to achieve a higher level of popular empowerment and efficiency in government management at all levels.

“The representatives I’ve met may have the best of intentions, but in practice the results are almost zero,” Eliski Ramirez, a 38-year-old computer scientist who lives in the eastern city of Holguin, told IPS.

The delegates periodically give an account of their management, but “at those meetings you hear the same statements every year, that there is no quality in the bread, that the neighborhood still has a simple lamp to light the night”. No, that there are no cars to pick up the trash frequently or there is no budget to expand the sewerage. One gets tired of the lack of solutions”, argued Ramírez.

For Félix Bruzon, a 70-year-old retired engineer from the western province of Maybach, “being a representative requires a lot of sacrifice. He is a man with the same difficulties as the town, who has to deal with processing problems in addition to maintaining his job and home. There is no payment for additional burden.

Bruzon recalled that “the best are not always chosen, because many people do not want to take on that responsibility and exhaust themselves. After taking office, representatives from higher ups say “there are no resources” or “we have no resources”. has more pressing priorities”. And that person then has to face the people who chose him.

The nomination of candidates first in neighborhood meetings, and the subsequent direct and secret vote of the future representative, is the moment in the Cuban electoral process in which citizens directly choose their representatives.

The elected representatives in each constituency form the Municipal Assembly of the People’s Power, the main body of state power in the country’s 168 municipalities, and which, when constituted for a term of five years, elects a president and a vice-president from among themselves. Member.

By law, the National Assembly of Popular Power, the unicameral local parliament, must consist of up to 50% of grassroots representatives, while the rest come from representatives of political and mass organizations, the latter to be approved by the citizenry. Selection by candidacy commissions.

This currently corresponds to about 605 legislators, to elect the President and Vice President of the Republic every five years, as well as the Council of State, in second-degree suffrage, a process that should take place next year.

In the opinion of analysts, the election results provide multiple readings, from a lack of faith in a participatory mechanism that offers few real solutions and in which a significant percentage of citizens feel disenfranchised, to signs of social discontent and government management of the vote. punished for

Many people and families feel exhausted by the daily shortages created by the country’s ongoing multi-dimensional crisis, and the most obvious signs of which are food, medicine shortages, as well as power cuts of up to 12 hours a day in most provinces. ,

In such a complex situation, US sanctions imposed over the last four years have affected, as has the Covid pandemic.

Additionally, a fire at a supertanker base in the western city of Matanzas in August and the effects of powerful Hurricane Ian to the west of the island in late September, which was alone in the province of Pinar del Río. More than 100 000 homes were affected and agriculture suffered significant damage, including the important tobacco sector.

President Miguel Díaz-Canel told the media after casting his vote, “We do this (elections), it shows that Cuba is on its way without stopping.”

The president believed that the electoral process expresses that Cuba “maintains its political and social stability, regardless of the economic suffocation that they are trying to inflict so that the population is overwhelmed by discontent, despair and shortcomings”. , can make the desired social explosion that the imperial government wants”, the latter pointing to the United States.

The elections were held amid a strong campaign on social networks by opposition sectors and activists who did not vote or did not vote. Described by officials in Washington as “hired mercenaries”, a section of internal dissent unsuccessfully sought to place candidates on the ballot.

Since 2011, the economic reform program known as the Guidelines anticipates the need to harness the potential of communities and place local development as a first-order policy.

The constitution treats the municipality as a “local society”, recognizes its autonomy and entrusts it with the needs of demarcation.

It is up to municipal governments to lead and manage local development strategies.

For social researcher Ovidio D’Angelo, “municipal autonomy has a multidimensional character, not only because it implies a substantial change in the functions of government—and a major challenge to the notion of its powers and essential competencies—but also because It is projected into areas of interconnections and social plots different from traditional ones, marked by verticalism and centralization.

A working group member from the government’s Center for Psychological and Sociological Research said, “The issue, collaterally, raises representative work and popular participation as the potential basis for all social, regional and national development.” IPS (CIPS).

D’Angelo agreed that deputies rarely have options to solve daily community problems, “because they depend on the capabilities and dedication of second-level institutions.”

But on other occasions, “it does not have the capacity to manage complex processes in the community, nor is it projected towards the conditions that determine the problems of daily life that arise from policies, priorities or visions at the national level”. On which they can make interesting offers to the residents.

In this sense, he considered it an opportunity to end the formalities of the process of electing constituency representatives and to enrich it, perhaps, with the candidates’ agenda and projections, “on the problems of communities or neighbourhoods, how to form multi-stakeholder coalitions”. mobilize and generate generative populations to contribute to their solutions, either by their own abilities or by seeking the necessary support”.

In his opinion, the review and renewal of mechanisms and functions in the popular power system “I find an urgent task in order to achieve a high degree of popular empowerment and efficiency in government management at all levels.”

“In the current dire situation in the country, this is not a wish, but an existing need,” D’Angelo said.