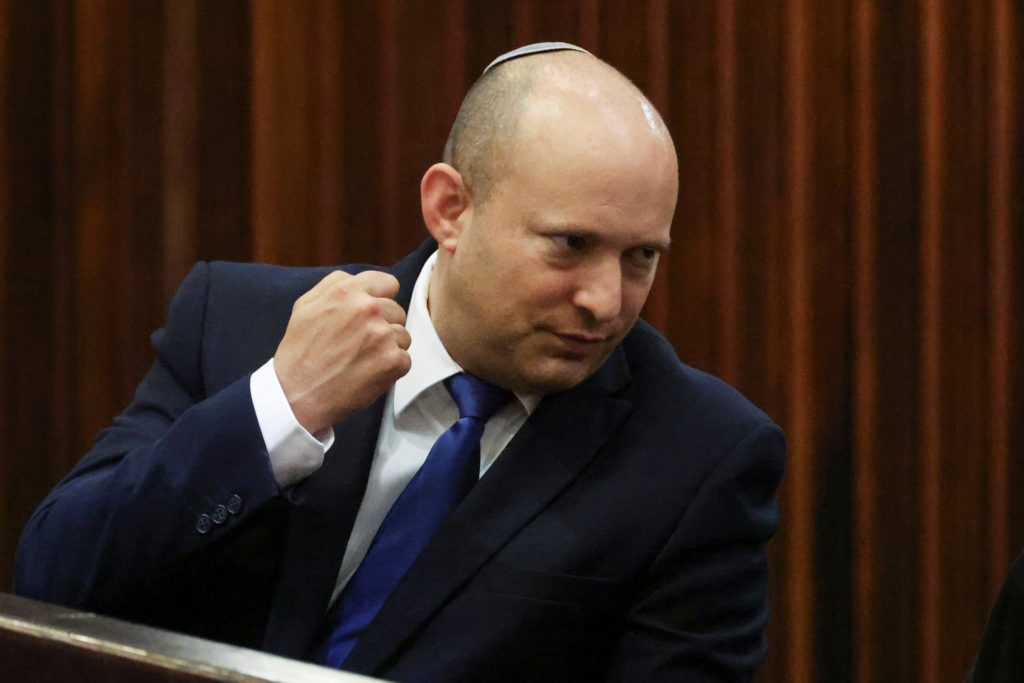 JERUSALEM ( Associated Press) — Israel’s embattled prime minister on Monday vowed to continue to lead the country as his shaky government limped into the opening of parliament’s summer session on the verge of collapse.

Less than a year after taking office, Naftali Bennett has lost his parliamentary majority, his own party is crumbling and a key governing partner has suspended cooperation with the coalition. That has set the stage for a possible attempt by the opposition, led by former Prime Minister Benjamin Netanyahu, topple the government later this week.

While Bennett appears to be poised to fend off this immediate challenge, his longer-term prospects are uncertain at a time when the government is deeply divided over major issues, Israel is facing an ongoing wave of stabbings and shootings by lone-wolf Palestinian attackers and a confrontation with the United States over West Bank settlement construction is looming.

Boaz Toporovsky, the acting coalition chairman, acknowledged the coalition is in the midst of a “serious crisis” but said he was optimistic it would survive. “Everyone understands that we’re at a crossroads that can bring about, heaven forbid, elections in Israel,” he told the Israeli public broadcaster Kan early Monday.

The new government made history when it took office last June, ending a prolonged deadlock in which the country went through four rounds of inconclusive elections in just two years. Racing to head off what would have been another election, Bennett cobbled together a diverse coalition of eight parties with little in common beyond their shared animosity toward Netanyahu.

The new coalition, including hard-line religious nationalists that oppose Palestinian statehood, dovish left-wingers and for the first time in an Israeli coalition, an Islamist Arab party, agreed to sideline the country’s most divisive issues and focus on areas of broad consensus.

The government has managed to pass a budget, navigate the coronavirus pandemic and strengthen relations with both the Biden administration and Israel’s Arab allies. Bennett has also emerged as a surprising mediator in the Ukraine-Russia war, regularly speaking to the leaders of both countries.

Read Also:  Timeline: Week one of Russia's invasion of Ukraine

Although Bennett, who leads a small religious-nationalist party, has ruled out peace talks with the Palestinians, he has tried to reduce tensions by taking steps to improve living conditions in the occupied West Bank and Gaza Strip.

This cautious approach has been repeatedly tested. One member of Bennett’s Yamina party defected when the government took office, accusing him of abandoning his nationalist ideology. A second member followed suit last month, leaving the coalition and opposition equally divided in the 120-seat parliament.

Weeks of Israeli-Palestinian violence, much of it fueled by tensions and fighting at Jerusalem’s most sensitive holy site, prompted Mansour Abbas, leader of the Islamist Arab Ra’am faction in the coalition, to suspend cooperation. Abbas has not said whether he will resume cooperation or join the opposition in attempts topple the coalition this week.

“We’re in a not so simple crisis with Ra’am,” Toporovsky said, adding that he understood the Islamist party’s disappointment in the slow pace of effecting change for Israel’s Arab citizens.

A public opinion survey in April by the Israel Democy Institute found that only 30% of believed the government was likely to survive the year, down from 49% in February. The think tank polled 751 Israeli Jews and Arabs, and reported a margin of error of 3.65 percentage points.

Netanyahu is weighing whether to introduce a motion this week to dissolve parliament and trigger new elections. Such a move is risky. It would require at least one of the remaining members of the coalition to join him, and there is no guarantee that will happen. If he fails, he would not be able to introduce a similar motion for the next six months as an ongoing corruption trial against Netanyahu moves ahead.

Read Also:  Anti-Vaxxers "sit-down" stage in a cheesecake factory, compare a bartender to a Nazi

A pair of no-confidence motions floated by the opposition on Monday quickly failed. That prompted Bennett and his main coalition partner, Foreign Minister Yair Lapid, to release a video together on Twitter saying they had defined the skeptics.

“We are going to continue with victories, to sustain an excellent government in the state of Israel for the citizens of Israel,” Bennett said.

Yohanan Plesner, a former lawmaker who is now president of the Israel Democracy Institute, said he expects the coalition to weather the storm, at least in the short term.

He said that even unhappy coalition members would have much to lose if the country were to plunge into new elections. Abbas, for instance, is just beginning to see the huge budgets he has secured to flow into the impoverished Arab community he represents.

But any member of the coalition can now pressure the government into pushing pet projects as opposed by other partners. This week, an Israeli planning committee is expected to approve plans to build some 4,000 new homes in Jewish settlements in the occupied West Bank, despite vociferous opposition from the United States and most of the international community. The construction project is being pushed by members of Bennett’s own party, which draws much of its support from the settler community.

“The next few days will allow us to know whether the coalition is in critical but stable condition or critical but unstable condition,” Plesner said. “The immediate areas to look at are either the Ra’am party, as a whole or parts of it, or elements from within Yamina.”