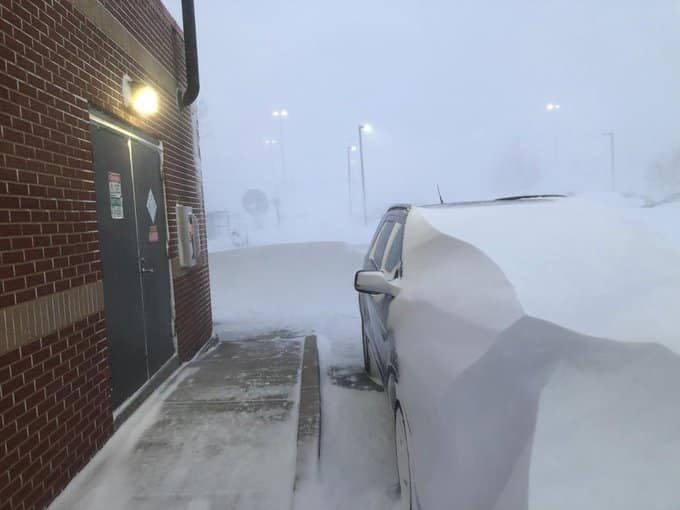 New York State declared a state of emergency ahead of the passage of the snow storm that affected a large part of the country and which the National Weather Service (NWS) classified as “once in a generation”.

A rare-intensity “bomb cyclone” winter storm swept across the United States on Friday, causing road and airport closures across much of the country on Christmas Eve.

Some 1,800 flights have been canceled in the country as millions of people try to meet their families for Christmas Eve and the Christmas holidays. The figure was added to the nearly 6,000 cancellations that took place on Friday, according to the FlightAware website, causing frustration among users at many of the country’s airports.

In addition, according to the Power Outage Tracker, approximately 1.2 million people live without power in their homes, primarily in the states of North Carolina, Tennessee, and Maine.

The National Weather Service (NWS), which has predicted the coldest Christmas season in decades, reported Saturday that heavy snowfall and strong winds are expected across the Midwest and Northeast.

“More than 240 million people (over 70% of the population) are affected by weather alerts,” the NWS said.

“We have snow, flooding, ice, below zero temperatures and everything Mother Nature could hit us with this weekend,” Governor Cathy Hochul said. He urged residents not to travel until road conditions were safe.

He explained that after rain (with low temperatures) there isn’t enough time before snow builds up, for snowplows and equipment to salt the roads. “It creates incredibly dangerous conditions,” he said, warning that “the roads are going to be like an ice skating rink,” especially for areas in the north of the state.

“Please take this storm very seriously,” the president urged on Thursday. Joe Biden, “I encourage everyone (…) to listen to the warnings at the local level. This is serious.”

According to the Flight Aware website, about 5,000 flights were canceled on Friday and another 7,600 were postponed. The most affected airports were in Seattle (Northwest), New York, Chicago (North) and Detroit.

The storm acquired the status of a “bomb cyclone” after a sudden drop in air pressure for 24 hours on Friday afternoon. This phenomenon produces heavy rain or snow, flooding along the coasts, and hurricane-force winds.

Some of the heaviest snowfall occurred in the north of the country, particularly in the Great Lakes region.

What makes the current situation extraordinary is that the atmospheric pressure decreased very rapidly in less than 24 hours.

Canada was also bracing for unusually low temperatures for the season.

Temperatures ranged from -40 to -50 degrees in Alberta (Western Canada) and Saskatchewan (Central).