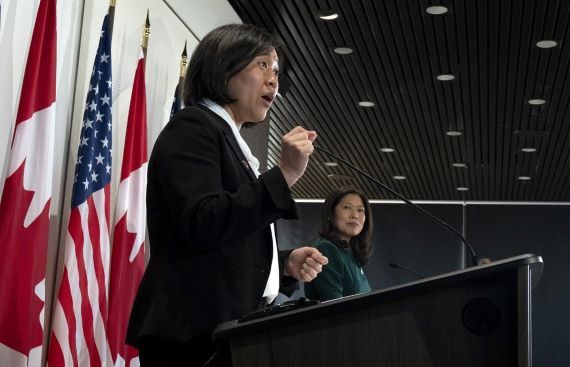 WASHINGTON — Canada supports efforts by the United States to challenge what it sees as Mexico’s “protectionist” energy policies that would violate North American trade rules.

A spokeswoman for Canadian Trade Minister Mary Ng said Ottawa supports the US request for dispute settlement talks with Mexico. Alice Hansen indicated that the Canadian government also plans to conduct its own consultations.

Canada, she writes, agrees that Mexico’s policies are inconsistent with its obligations under the Canada-United States-Mexico Agreement (CUSMA).

U.S. energy producers have been complaining for months that Mexico offers preferential prices and sets advantageous emissions standards to its two main companies in the energy sector: oil and gas producer Pemex and the Commission. Federal Electricity.

The US Trade Representative accuses Mexico of using delaying tactics to block US access to Mexico’s energy sector, including renewable energy such as wind and solar.

“Canada has consistently raised concerns about Mexico’s shift in energy policy,” Ms. Hansen wrote. We agree with the United States that these policies are inconsistent with Mexico’s obligations under CUSMA.

The show of solidarity between Canada and the United States may come as a surprise given their trade relationship which has been largely marked by disputes since the trilateral free trade agreement became law two years ago.

The two countries are regularly at odds over how Canada uses CUSMA rules to allow US dairy farmers access to the supply-managed Canadian market. And Joe Biden’s administration only agreed earlier this month to lift tariffs on Canadian-made solar products, tariffs imposed in 2018 by Donald Trump’s administration.

Softwood lumber also remains an old bone of contention between Canada and the United States. In November 2021, the U.S. Department of Commerce doubled tariffs on softwood lumber, to set them at 17.9%, but it finally decided earlier this year to lower them to 11.64%.

Portugal gets rid of Cristiano Ronaldo in the World Cup