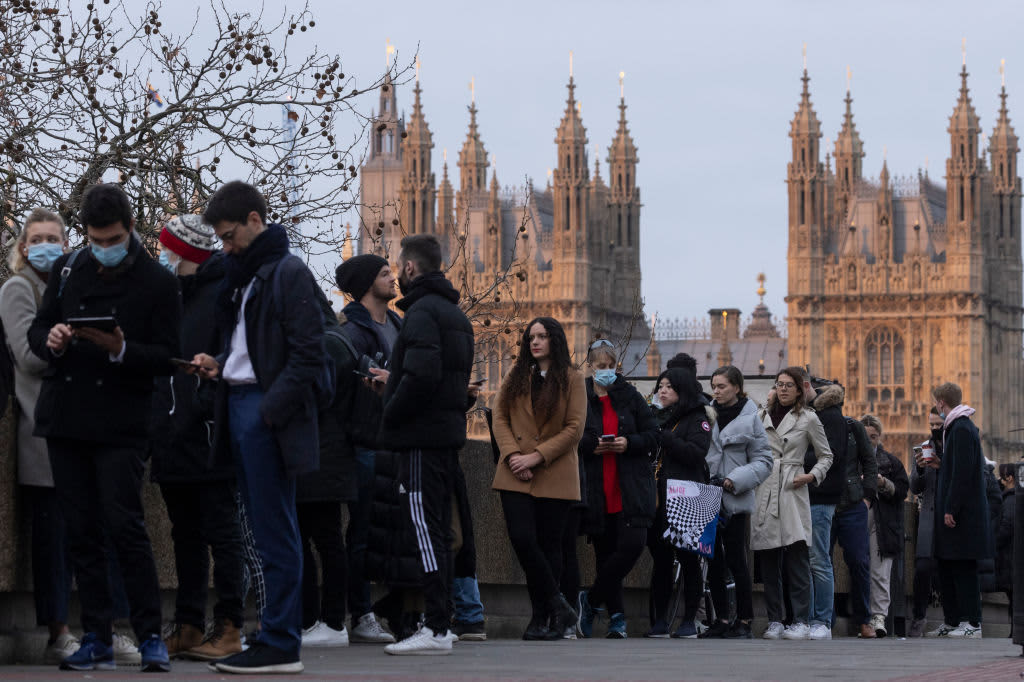 Members of the public queue for COVID-19 vaccination and booster jabs at St Thomas’ Hospital on December 14, 2021 in London, England.

Omicron has almost completely replaced the previously dominant delta variant of COVID-19 in England, a new study has found, with potential re-infection in the vast majority of cases.

Imperial College London’s REACT study – updated monthly since May 2020 and funded by the UK Government – ​​analyzed 100,607 PCR test results from across England. Swabs were collected between January 5 and January 20.

The study found that 99% of the sequenced positive swabs came from people infected with the Omicron variant, with only 1% of infections being caused by the delta variant.

“We saw unprecedented levels of SARS-CoV-2 infection in England in January 2022 and almost complete replacement of delta by Omicron in January 2022,” the study’s authors said in their paper released on Wednesday.

When previous forms of covid were circulating among the population, it was thought that a pre-covid infection, in which people had caught the virus and recovered, might provide some protection from re-infection. But worrying that is not the case with Omicron, UK health officials estimated in December that the risk of re-infection with Omicron is 5.4 times higher than with the delta version.

Researchers noted on Wednesday that Omicron’s infectivity resulted in the highest COVID spread ever seen in the REACT study.

“Vaccination (including booster campaigns) remains the mainstay of defense against [Covid-19] Given the high level of protection against hospitalization,” the research team said.

“However, further measures beyond vaccination may be needed if high rates of Omicron infection persist, even though Omicron is intrinsically less likely to cause serious disease.”

Omicron is a highly mutated, highly contagious form of COVID that has been identified by health officials in at least 171 countries, and has led to a record number of COVID cases in many countries.

On Monday, WHO Director-General Tedros Adhanom Ghebreyesus told the organization’s executive board that since the variant was identified nine weeks ago, more than 80 million COVID cases have been reported to the WHO – higher than those reported throughout 2020. more. Last week, an average of 100 cases were reported every three seconds, Tedros said, and every 12 seconds someone lost their life to the virus.

The latest REACT study found that although coronavirus infections declined in England in early January, they still “plateaued high” with one in 23 people infected.

Of the tests conducted in the latest round of studies, 4.4% were positive, marking a three-fold increase from December.

England is set to end most of its few remaining COVID measures on Thursday, when wearing masks will no longer be mandatory and the public will no longer be advised to work from home. About 85% of the country’s eligible population – those over the age of 12 – have been fully vaccinated against COVID, while 64% have received a booster shot.

The Imperial College study also found that 0.4% of positive tests were due to the BA.2 Omicron sub-lineage.

According to the WHO, Omicron infections currently comprise four subtypes, and while the BA.1 lineage is most prominent, trends in India, South Africa and Denmark suggest that BA.2 is becoming more prevalent.

Last week, the UK’s Health Protection Agency named BA.2 the “version under investigation”, Sky News reported, despite there being few cases of the sub-lineage.

Price hike: Buy Hero Motors before the end of the month, prices will go up from April, find out what the new prices will...

The reasons why Oregon basketball has struggled, according to Ducks Wire