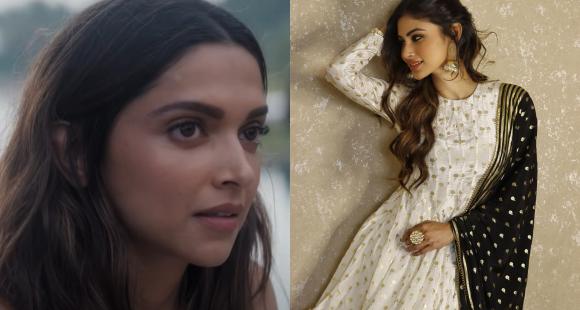 As soon as the trailer of Gehraiyaan was launched today, Deepika Padukone, Ananya Panday and Siddhant Chaturvedi are being praised a lot. But, the sweetest note came from Ranveer Singh for his wife Deepika Padukone.

Shah Rukh Khan has been out of action since his last film Zero and fans are missing him on screen. Although many people are missing him on social media too. The superstar stayed away from social media amid the proceedings of his son Aryan Khan’s case with the Narcotics Control Bureau. On Thursday, fans started trending ‘We miss you SRK’ on Twitter and expressed how much they want the star to return.

it’s been 4 months #WeMissYouSRK hope he comes back soon pic.twitter.com/Q6U9cYSGMP

Samantha and Naga Chaitanya announced their separation on their social media handles last year on October 2, 2021 and left all their fans in a state of shock. But in a surprising turn of events, the actress has deleted her divorce statement from social media.

Mouni Roy and boyfriend Sooraj Nambiar are all set to tie the knot in Goa next week and fans of the Brahmastra actress are excited about it. While there were reports that the couple will tie the knot on January 27 at W Goa, we now have an exclusive update about Mouni’s wedding. As per our source, “Mouni Roy and Sooraj Nambiar have planned an intimate and classy destination wedding in Goa. And the private affair will take place at the luxurious Hilton Goa Resort in the state.”

The trailer of Gehraiyaan was released today and at the launch, Ananya, Siddhant and Deepika opened up about the storyline for the film along with Shakun Batra. Meanwhile, Ananya Panday reveals the incident where Shakun and screenwriter Ayesha Devitre felt she fainted during the course of the story. Not only this, Ananya also opened up about being on her bucket list of directors to work with Shakun.

All the fans of Salman Khan are ready for his collab with Iulia Vantur. He will soon be seen in a T-Series music video opposite Pragya Jaiswal. The song is sung by Guru Randhawa and Iulia Vantur and is titled ‘Main Chala’. The official Instagram handle of T-Series shared the first look of the song and we bet fans will be super excited for it.

Deepika Padukone’s inspiration for Ghahriyan comes from her past

Deepika Padukone is one such actress who never fails to raise awareness about mental health issues and depression. The actor who is currently awaiting the release of his upcoming film Gehraiyaan has also portrayed a character that matches with his personal life and past experiences. In a recent interaction, the Piku star candidly reflected on how he prepared to dive deep within himself for his roles.

Renowned choreographer Remo D’Souza’s brother-in-law Jason Watkins was found dead at his residence in Millat Nagar. Remo’s wife and Watkins’ bereaved sister Lizelle D’Souza shared a picture of him on her Instagram stories and wrote, ‘Why??????? how could you do this to me. I will never forgive you’.

Fans could not calm down ever since the Gehraiyaan was announced and the teaser of the film was released. Well, as promised, the trailer of the film was released today via a virtual press conference in the presence of the entire cast and crew. Talking about the film, Deepika Padukone, who looked gorgeous today, revealed that Ranveer Singh would often tell her that Shakun Batra and he would make a great film together. Elaborating on this, DP said, ‘Shakun is on my list. Ranveer used to say that Shakun and you will make a great film together. I met Shakun a few years back, and we hit it off instantly. Deep down I knew we would make a film someday. It didn’t feel like a director was pitching an idea. Felt like a friend. The film has evolved since I first heard it. We had trust and confidence in each other and that’s why we could make a film with such bravery.”

Deepika Padukone did not respond to Shakun Batra after listening to the script of Gahriyaan; Why over here?

Deepika Padukone, who is gearing up for the release of Gehraiyaan, was yearning to work with Shakun Batra. This was revealed by producer Karan Johar during the trailer launch. He also revealed how Deepika did not respond to Shakun for two days after hearing the script of Gehraiyaan. “Shakun was a little worried. Then I called Dipika to get an update and she said, ‘I am so overwhelmed with the script that it took me a while to process it.’

After creating tremendous buzz in the city, the makers of Gehraiyaan have finally unveiled the trailer of the film, which is a tale of friendship, love and lies. Deepika Padukone, Ananya Panday and Siddhant Chaturvedi starrer ‘Ghehraiyaan’ will release on the OTT platform on February 11 this year.

Nargis Fakhri is dating a US based entrepreneur

Nargis Fakhri, who broke up with Justin Santos around October last year, is said to be dating US-based entrepreneur Tony Baig. “They met socially and immediately hit it off. They love to spend time in each other’s company, and you’ll often find them going out together. Nargis wants to keep it extremely low-profile as it’s still going to happen.” Quite new. But it seems love is blossoming,” a source told Hindustan Times.

Hrithik Roshan has been a fitness inspiration for many. But today he was seen singing praises for his mother Pinky Roshan’s fitness spirit as he shared videos of his mother’s workout sessions on social media. Hrithik wrote, “Watching him at the age of 68 give everything for fitness and wellness gives me hope that we can all be better, no matter what age.”

Alia Bhatt, who often treats fans with beautiful selfies, took social media by storm as she shared an adorable picture with sister Shaheen Bhatt. In the picture, the Bhatt sisters were seen holding each other and it speaks volumes about their unconditional love. Evelyn Sharma shared the problem of breastfeeding in her recent post

Evelyn Sharma, who embraced motherhood for the first time in November last year, has shared a picture with her little princess, as she talks about her breastfeeding experience. She captioned the image, “When you thought you had finally established a routine and then she starts #clusterfeeding!! #smileforthecamera #thingsnoonewarnsyouabout #mummylife”.

Vicky Kaushal, who is currently shooting for Laxman Utekar’s yet-to-be-titled project with Sara Ali Khan in Indore, got stuck in a traffic jam this morning. He shared a video of the same and made the most of the time as he jammed Nusrat Fateh Ali Khan’s popular number Saans Ki Mala Pe.

Lata Mangeshkar, who was admitted to the hospital after testing positive for COVID 19 earlier this month, is still in the ICU. Dr Pratata Samdani of Breach Candy Hospital said, “Lata ji is still in the ICU, we are trying our best to ensure that she recovers at the earliest. Pray for her recovery.”