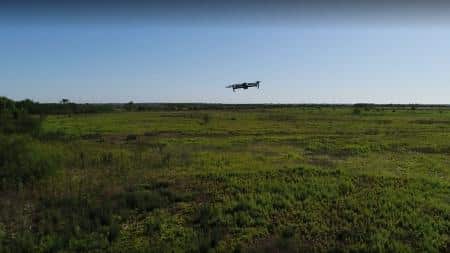 The Ministry of Environment and Sustainable Development inducted seventeen drones for early detection of forest fires in “difficult areas” in various national parks of the country, it was officially reported this Tuesday.

drone Eighteen will allow monitoring of hard-to-reach points in protected areas Distributed in fifteen provinces, being able to move to other regions for emergency reasons.

The Ministry of the Environment, headed by Juan Cabandi, specified in a statement that Aircraft are available to operate in Lenin and Laguna Blanca National Parks in Neuquén; Los Alers and Lago Puelo in Chubut; Lihuel Calel, in La Pampa; El Palmera, in Entre Rios; and in Iberá and Mburucuya, Corrientes.

This new tool makes it possible to account for potential outbreaks in areas of high environmental sensitivity and difficult to detect by other systems, which contributes to the avoidance of wildfires of greater magnitude and allows national makes it possible to make effective the resources deployed in Forest Management Service. fire (NFMS)

The drones are managed by a radio control network and provide real-time information to a ground station for execution of an automated day and night early detection system for wildfires.

In recent days, the first igneous source from the new system was detected in Los Aleras National Park.That allowed “the rapid response of brigade members to contain it before it spread,” according to what was stated in the text.

This new tool makes it possible to account for potential sources in areas of high environmental sensitivity and difficult to detect by other systems, which helps prevent large wildfires and makes it possible to make effective the resources deployed across the country by the National Fire Management Service (SNMF).

On the other hand, in the statement It was recalled that Argentina is in a water emergency and all provinces were urged to declare a ban on the use of fire As long as this weather condition persists.

Based on the November report of the National Drought Monitoring Table, it was identified that about 163 million hectares of the national area is under drought condition, of which 22 million present a severe category.