Santo Domingo. – The Ministry of Environment and Natural Resources on Monday announced the start of the 2023 humpback whale (Megaptera novaeanglea) observation season: “the dance that brings life”, and signed an inter-institutional alliance for the right management and development of ecotourism activity and Management improvements in the marine mammal sanctuaries Banco de la Plata and La Navidad, as well as in Samana Bay.

Humpback whales attract tourists to the north coast each year from January 15 to March 31 with their “leaps and dances” as they mate in the North Atlantic, Greenland, the United States, Canada, Iceland, and the Stellwegen Sister Sanctuary in Massachusetts. migrate to. In the warm waters of the Caribbean.

“This season is a milestone at the start of the year because it is not only an opportunity to observe one of the world’s largest marine mammals, but also because of the promotion of ecotourism, the country’s greatest economic potential.” The Minister of the Environment, Environment and Natural Resources, Miguel Serra Hatton, who was accompanied by Federico Franco, Deputy Minister of Protected Areas and Biodiversity, José Ramón Reyes, Deputy Minister of Coastal and Marine Resources, as well as representatives of the entities that signed the agreement.

During the event at the unit’s headquarters, Hatton urged the population to visit the sanctuary and enjoy tourism by sea or land from 8:00 a.m. to 4:00 p.m., while speaking about the importance of protecting the species. Raised awareness of the guarantee of ecosystem services of vital importance to life and the planet. 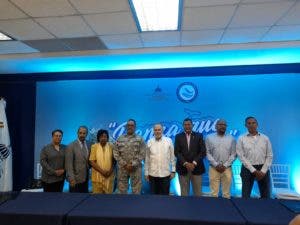 Hatton urged the populace to visit the sanctuary.

With the signing of the agreement, the Management Committee of the Bancos de la Plata and La Navidad Marine Mammal Sanctuary was formed for a sustainable management observation season that guarantees the physical integrity of these marine mammals and visitors.

Patricia Lamelas, from the Center for Conservation and Ecological Development of the Bay of Samana and its Surroundings; Lorenzo A. Martínez Esquia, representative of boat owners at the Banco de la Plata; Augusto Gonzalez, President of the Samana Bay Boat Owners Association (ASDUBAHISA); Greetings to Heredia Lorenzo from the Dominican Foundation for Marine Studies Inc. (FUNDEMAR), and Osvaldo Emidio Vazquez Ravelo from Environmental Consulting and Marine Technology (ATEMAR).

The governor of Samaná, Teodora Mulić, was also present during the signing of the agreement; The general director of the National Environmental Protection Service (SENPA), Captain René Y. Rodriguez Alvarez, among others.

We invite you to read: Humpback whale dance again in Dr. perpetuates the species

As in other years, the Ministry of the Environment ordered that the observation season be carried out under strict compliance with the rules established in Law 64-00. This means keeping a prudent distance and avoiding noise in order to fully care for the whales, and that the vessels comply with the provisions of the Dominican Armed Forces regarding the capacity of the people who will be able to travel.

Likewise, each boat captain must have a communication radio and passengers must carry their respective life jackets or vests, along with other regulations contained in the Management Plan of the Bancos de la Plata and La Navidad Marine Mammal Sanctuary.