Eric Curry Of The Gophers Could Be Ready For Hawkeyes 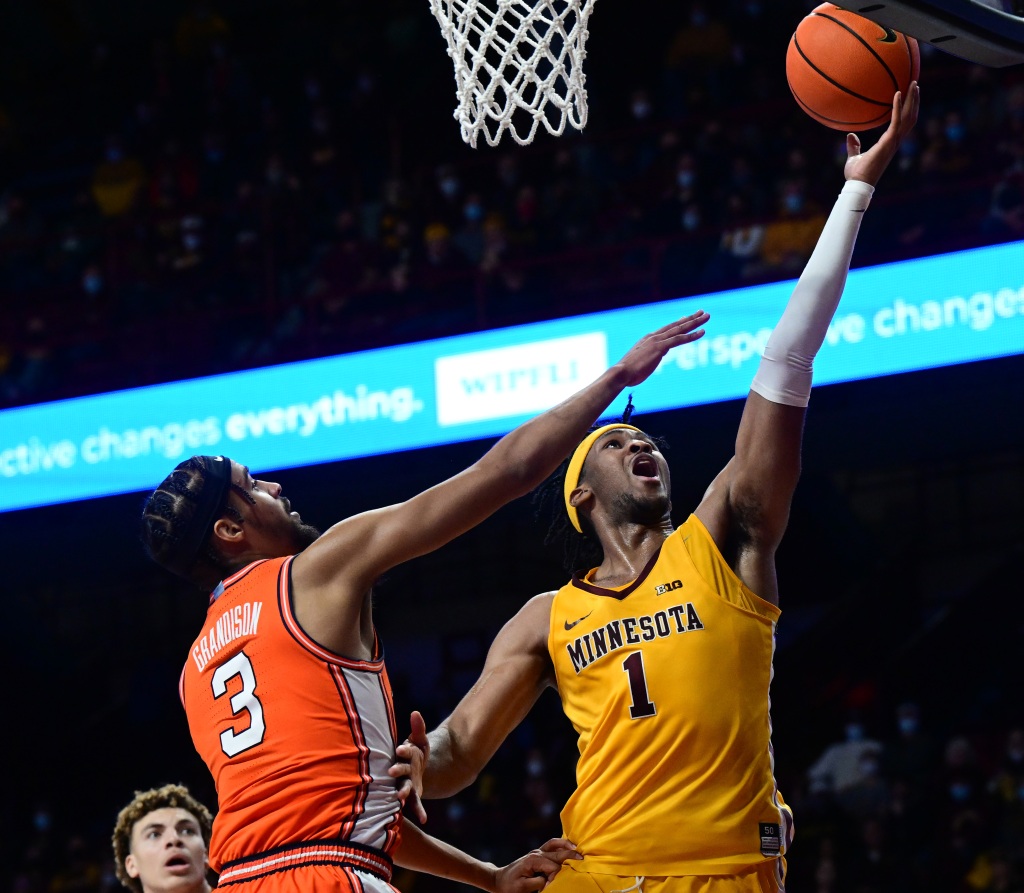 It didn’t look good for Eric Curry as he went down with a left ankle injury with a minute left in Wednesday’s 71-69 loss to No. 10 Michigan State. But Gophers coach Ben Johnson said Friday the team’s starting center could play Sunday against Iowa.

Curry was injured when teammate Jamison Battle, after falling off a defensive rebound attempt, landed on his left foot. Coaches carried a 6-foot-9, 245-pound center off the court.

It was a big hit in a tight losing streak. Curry, a sixth-year senior who has started in all 14 Gophers games this season, scored a team-high 19 points and added seven rebounds in 29 minutes against the Spartans, who won in the last second.

Curry had two full seasons wiped out with knee injuries and another cut short with a foot injury, but this one doesn’t look like a big deal.

“I’m pretty sure he knows it’s not as crazy as his last few injuries,” said teammate and longtime friend Peyton Willis. “He’s still in high spirits.

Minnesota (10-4, 1-4 Big Ten) beat Michigan in Ann Arbor on Dec. 11, but has since lost three consecutive conference games to Illinois, Indiana and the Spartans. If the Gophers want to make it to the NCAA Tournament, they need to start winning some of those close games. They lost to Illinois 76-53, but their other three Big Ten losses were eight points or less.

Johnson used a seven-man rotation during conference play. If Curry can’t get away, 6-9 forward Charlie Daniels, the mainstay of the rotation, will likely start at center, with Danny Ogele 6-7 backing him up. Both are elderly, but on paper this is a significant drop. Curry is averaging 8.7 points and 6.8 rebounds per game. Daniels, Stephen F. Austin’s senior transfer, is averaging 1.7 points and 1.7 rebounds, while Ogele has only played five games.

“(Daniels) is strong, physically, he can defend on the stand. He knows our offense and knows how we want to play,” Johnson said. “He’s different from Eric, but if Eric can’t get away, he’ll have the opportunity to come in and play an extra, maybe 5 or 10 minutes.”

Regarding Ogele, the coach said: “If Eric loses, that’s the next guy and he’s that next guy. So the next two days will be important for the whole team.”

Of course, for Curry.

“If it’s a sprain, it’s a sprain and there’s a protocol,” Johnson said. “Usually it’s one to three weeks. If it’s not a sprain but something else, well then it’s up to Eric in terms of comfort and pain levels. The most important thing for me is that I will never put a guy in a place where you can aggravate the injury or aggravate it.

“If he’s there, he’s there because he feels good.”