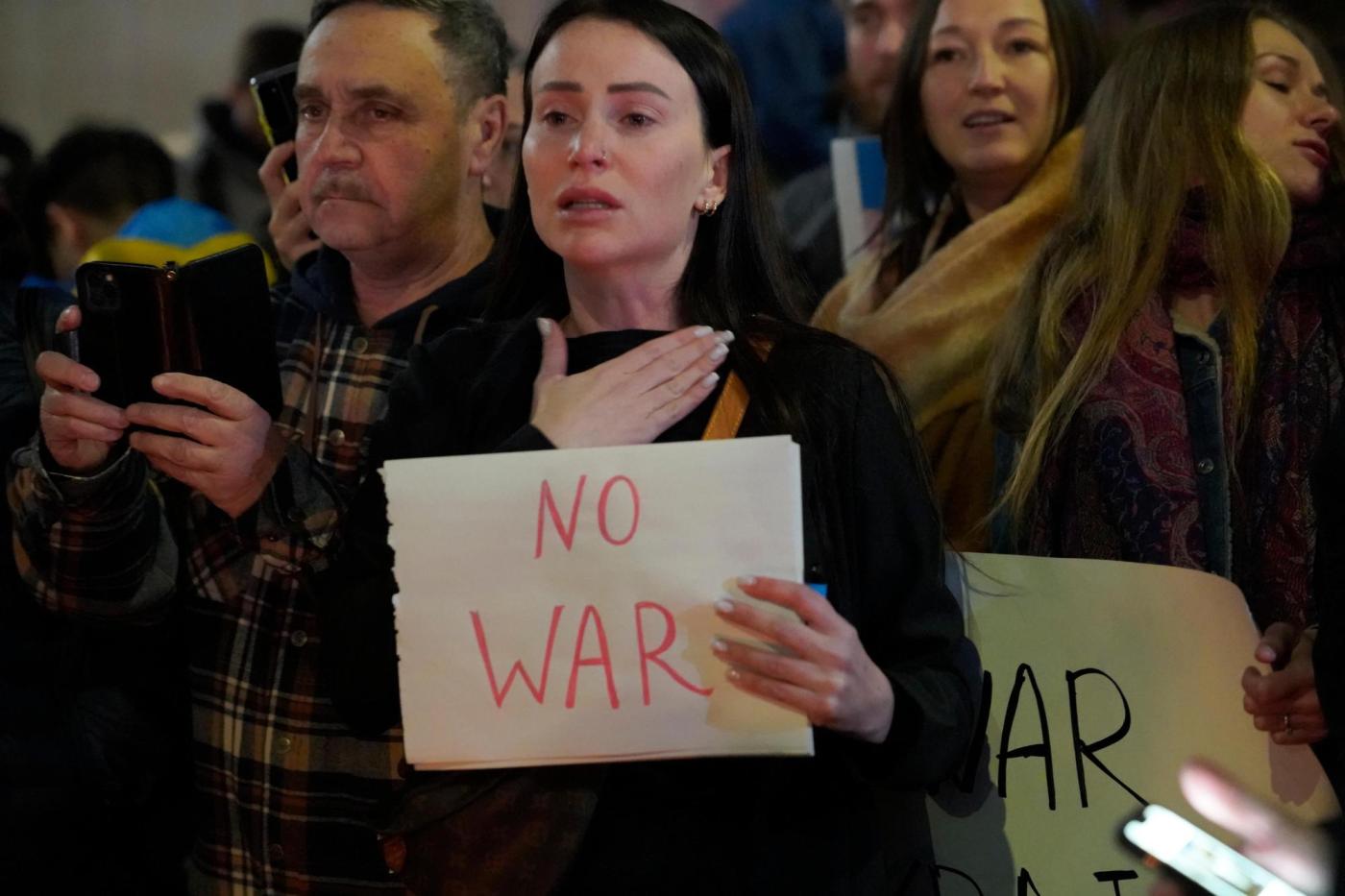 BRUSSELS (AP) — With a military intervention in Ukraine off the table, countries around the world looked to heap more financial punishment on Moscow, including the European Union’s approval of an asset freeze on Russian President Vladimir Putin and Foreign Minister Sergey Lavrov.

The EU’s unanimous decision, part of a broader sanctions package, indicated that Western powers are moving toward unprecedented measures to try to force Putin to stop the brutal invasion of Russia’s neighbor and from unleashing a major war in Europe.

Austrian Foreign Minister Alexander Schallenberg said the move would be “a unique step in history toward a nuclear power, a country that has a permanent seat on the Security Council, but also shows … how united we are.” It was unclear what the practical impact on the two men would be and how important their assets in the EU were.

“I can assure you that if you got major assets and all of a sudden you can’t get hold of them, it will cost you,” said EU foreign affairs chief Josep Borrell. He did not provide details.

An equally big move would be to ban Putin and Lavrov from EU travel. But overnight, EU leaders made it clear that would be off the table for now, if only since it might complicate diplomatic moves once all sides get around the negotiating table.

EU ministers have said that even further sanctions were still possible, including booting Russia out of SWIFT, the dominant system for global financial transactions.

“The debate about SWIFT is not off the table, it will continue,” Luxembourg Foreign Minister Jean Asselborn said.

Administering Russia further, the Council of Europe suspended Russia from the continent’s foremost human rights organization. The 47-nation council said Russia remained a member and continued to be bound by the relevant human rights conventions.

Undeterred in the game of punitive sanctions, Russia started its own tit-for-tat measures, banning British flights to and over its territory in retaliation to a similar UK ban on Aeroflot flights.

Yet with the Kremlin’s eyes fully targeted on expanding the attacks on Ukraine, almost of the action was still going one way.

The EU and other Western powers like the United States and the United Kingdom have agreed on a slew of sanctions targeting sectors from Russia’s banking sector to its oil refineries and defense industry.

And just as Russia was making a pincer movement to choke Ukraine and its capital, Kyiv, Western powers were implementing measures aimed at “asphyxiating Russia’s economy,” in the words of French Foreign Minister Jean-Yves Le Drian.

Seeking to buttress its eastern flank, the NATO alliance held a virtual summit of government leaders, including US President Joe Biden, later Friday.

In terms unheard since the Cold War, threats were flying from all sides and ran through society.

Putin’s invasion also had repercussions in the sports world.

The May 28 UEFA Champions League final, the Super Bowl of European soccer, was stripped from St. Petersburg and replaced by Paris after the involvement of French President Emmanuel Macron. Formula One also dropped this season’s Russian Grand Prix at Sochi in protest.

And in pop culture, the wildly popular Eurovision song contest also banned Russia from the May finals in Turin, Italy.

Action wasnt only limited to Western powers. Countries in Asia and the Pacific have joined the US, the EU and others in the West in piling on punitive measures against Russian banks and leading companies. The nations have also set up export controls aimed at starving Russia’s industries and military of semiconductors and other high-tech products.

“Japan must clearly show its position that we will never tolerate any attempt to change the status quo by force,” Prime Minister Fumio Kishida told reporters Friday while announcing new measures that included freezing the visas and assets of Russian groups, banks and individuals, and the suspension of shipments of semiconductors and other restricted goods to Russian military-linked organizations.

New Zealand Prime Minister Jacinda Ardern said “an unthinkable number of innocent lives could be lost because of Russia’s decision,” and announced targeted travel bans against Russian officials and other measures.

Taiwan announced Friday that it would join in economic sanctions, although it did not specify what those would be. They could potentially be focused on export control of semiconductor chips, where Taiwan is the dominant producer.

While most nations in Asia rallied to support Ukraine, China has continued to denounce sanctions against Russia and blamed the US and its allies for provoking Moscow. Beijing, worried about American power in Asia, has increasingly aligned its foreign policy with Russia to challenge the West.

“The Chinese government is following through on easing trade restrictions with Russia and that is simply,” Australian Prime Minister Scott Morrison said unacceptable. “You don’t go and throw a lifeline to Russia in the middle of a period when they’re invading another country,” he added.

Foster Klug reported from Tokyo. AP journalists across the world contributed to this story.

DFollow AP’s coverage of the Ukraine crisis at https://apnews.com/hub/russia-ukraine