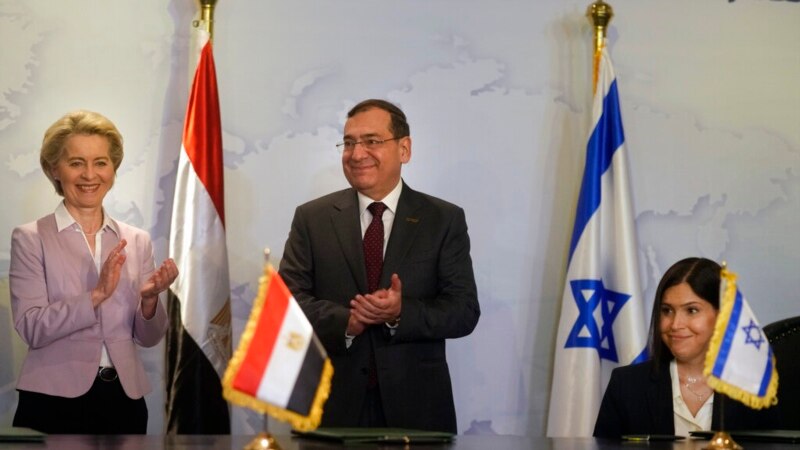 Egypt, Israel and the European Union on Wednesday signed a gas agreement in which Egypt will export Israeli liquefied natural gas to Europe via two Egyptian LNG plants.

The memorandum of understanding was signed at the Eastern Mediterranean Gas Forum in Cairo, which expands on gas cooperation between the three partners.

Representatives of participants in the gas forum welcomed the announcement of the agreement. Egypt is the only country in the gas forum that has plants that can produce liquefied natural gas.

Egyptian political sociologist Said Sadek told VOA that the announcement of the agreement had formalized cooperation between the EU, Egypt and Israel that had been going on for several months.

Sadek also said the US “is currently trying to negotiate a settlement for the maritime territorial dispute between Israel and Lebanon so that the gas in the disputed sector can be used as part of the current agreement with the EU.”

Al Jazeera TV reported that Russia on Wednesday reduced its natural gas exports to Europe “as a sign of dissatisfaction with the agreement signed in Cairo.”

Paul Sullivan, a Washington-based energy analyst at the Atlantic Council, told VOA that “the agreement between the EU, Egypt and Israel to export LNG to the EU is one way the European Union can continue to promote itself. to withdraw from “what he called” excessive dependence on Russian gas, “and that it” could benefit both Egypt and Israel economically and strategically. “

Egyptian President Abdel Fattah el-Sissi said at a joint press conference with European Commission President Ursula von der Leyen that the agreement signed in Cairo was part of what he called “increased cooperation between Egypt and the EU in many areas, “amid a difficult global political and economic period.

Sissi also thanked Egypt’s political partners, including the EU, for helping to “mitigate the effects of rising food prices and the current crisis affecting many developing countries.”

Von der Leyen told the press conference that the EU would contribute financially and technologically to help Egypt with food production.

“These investments will support food systems in your region and elsewhere so that we can discuss together how to develop solutions and technologies… modern technologies of precision farming… new crops adapted to climate change, because it is important to us that the production of food in the region is enlarged and the dependence on other regions is reduced, ”she said.