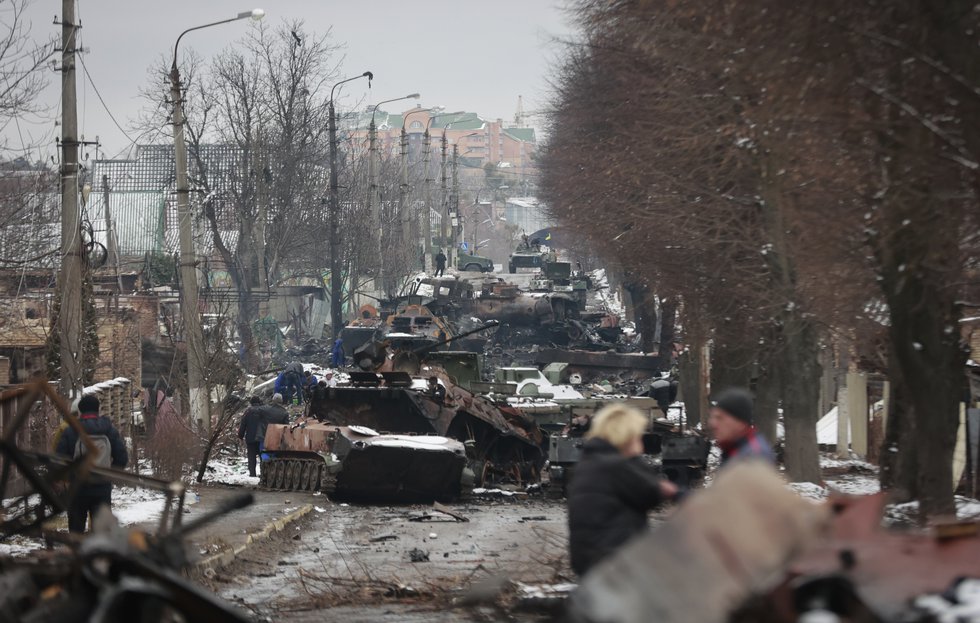 Plant andriy Tuz told Ukrainian television that shells were falling directly on the Zaporizhzhia plant in the city of Enerhodar and had set fire to one of the facility’s six reactors. That reactor is under renovation and not operating, but there is nuclear fuel inside, he said.

A government official told The Associated Press that elevated levels of radiation were detected near the plant, which provides about 25% of Ukraine’s power generation. The official spoke on condition of anonymity because the information has not yet been publicly released.

Tuz said firefighters cannot get near the flames because they are being shot at. Ukrainian Foreign Minister Dmytro Kuleba tweeted a plea to the Russians to stop the assault and allow fire teams inside.

“We demand that they stop the heavy weapons fire,” Tuz said in a video statement. “There is a real threat of nuclear danger in the biggest atomic energy station in Europe.”

The attack renewed fears that the invasion could result in damage to one of Ukraine’s 15 nuclear reactors and trigger another emergency like the 1986 Chernobyl accident, the world’s worst nuclear disaster, which happened about 110 kilometers (65 miles) north of the capital.

The mayor of Enerhodar said earlier that Ukrainian forces were battling Russian troops on the city’s outskirts. Video showed flames and black smoke rising above the city of more than 50,000, with people streaming past wrecked cars, just a day after the UN atomic watchdog agency expressed grave concern that the fighting could cause accidental damage to Ukraine’s 15 nuclear reactors.

“Many young men in athletic clothes and armed with Kalashnikovs have come into the city. They are breaking down doors and trying to get into the apartments of local residents,” the statement from Energoatom said.

Later, a live streamed security camera linked from the homepage of the Zaporizhzhia plant showed what appeared to be armored vehicles rolling into the facility’s parking lot and shining spotlights on the building where the camera was mounted.

There were then what appeared to be bright muzzle flashes from vehicles, followed by nearly simultaneous explosions in the surrounding buildings. Smoke then rose into the frame and drifted away.

The fighting at Enerhodar came as another round of talks between the two sides yielded a tentative agreement to set up safe corridors inside Ukraine to evacuate citizens and deliver humanitarian aid.

Elsewhere, Russian forces gained ground in their bid to cut off the country from the sea, as Ukrainian leaders called on citizens to rise up and wage guerrilla war against the invaders.

While the huge Russian armored column threatening Kyiv appeared bogged down outside the capital, Vladimir Putin’s forces have brought their superior firepower to bear over the past few days, launching hundreds of missiles and artillery attacks on cities and other sites around the country and making significant gains in the south.

Ukrainian Prime Minister Denys Shmyhal called on the West to close the skies over the country’s nuclear plants as fighting intensified. “It is a question of the security of the whole world!” he said in a statement.

The US and NATO allies have ruled out creating a no-fly zone since the move would pit Russian and Western military forces against each other.

The Russians announced the capture of the southern city of Kherson, a vital Black Sea port of 280,000, and local Ukrainian officials confirmed the takeover of the government headquarters there, making it the first major city to fall since the invasion began a week ago.

Heavy fighting continued on the outskirts of another strategic port, Mariupol, on the Azov Sea. The battles have knocked out the city’s electricity, heat and water systems, as well as most phone service, officials said. Food deliveries to the city were also cut.

Associated Press video from the port city shows the assault lighting up the darkening sky above largely deserted streets and medical teams treating civilians, including one inside a clinic who appeared to be a child. Doctors were unable to save the person.

Severing Ukraine’s access to the Black and Azov seas would deal a crippling blow to its economy and allow Russia to build a land corridor to Crimea, seized by Moscow in 2014.

Overall, the outnumbered, outgunned Ukrainians have put up stiff resistance, staving off the swift victory that Russia appeared to have expected. But a senior US defense official, speaking on condition of anonymity, said Russia’s seizure of Crimea gave it a logistical advantage in that part of the country, with shorter supply lines that smoothed the offensive there.

Ukrainian leaders called on the people to defend their homeland by cutting down trees, erecting barricades in the cities and attacking enemy columns from the rear. In recent days, authorities have issued weapons to civilians and taught them how to make Molotov cocktails.

“Total resistance. … This is our Ukrainian trump card, and this is what we can do best in the world,” Oleksiy Arestovich, an aide to Ukrainian President Volodymyr Zelenskyy, said in a video message, recalling guerrilla actions in Nazi-occupied Ukraine during World War II.

The second round of talks between Ukrainian and Russian delegations was held in neighboring Belarus. But the two sides appeared far apart going into the meeting, and Putin warned Ukraine that it must quickly accept the Kremlin’s demand for its “demilitarization” and declare itself neutral, renouncing its bid to join NATO.

How the Jewish community is dealing with the Russian invasion. (Source: CNN/AFP/POOL VIA VGTRK/READOVKA/AFPTV/UKRAINIAN PRESIDENCY/YOUTUBE/SHIEZOLI/RABENU)

Putin told French President Emmanuel Macron he was determined to press on with his attack “until the end,” according to Macron’s office.

The two sides said that they tentatively agreed to allow cease-fires in areas designated safe corridors, and that they would seek to work out the necessary details quickly. A Zelenskyy adviser also said a third round of talks will be held early next week.

Despite a profusion of evidence of civilian casualties and destruction of property by the Russian military, Putin declared what he called an “anti-Russian disinformation campaign” and insisted that Moscow uses “only precision weapons to exclusively destroy military infrastructure.”

Putin claimed that the Russian military had already offered safe corridors for civilians to flee, but he asserted without evidence that Ukrainian “neo-Nazis” were preventing people from leaving and were using them as human shields.

He also hailed Russian soldiers as heroes in a video call with members of Russia’s Security Council, and ordered additional payments to families of men killed or wounded.

A top Russian officer, Maj. Gen. Andrei Sukhovetsky, commander of an airborne division, was killed in the fighting earlier this week, an officers organization in Russia reported.

The Pentagon set up a direct communication link to Russia’s Ministry of Defense earlier this week to avoid the possibility of a miscalculation sparking conflict between Moscow and Washington, according to a US defense official who spoke on condition of anonymity because the link had not been announced.

The fighting has sent more than 1 million people fleeing Ukraine, according to the UN, which fears those refugee numbers could skyrocket.

Ukrainians still in the country faced another grim day. In Kyiv, snow gave way to a cold, gray drizzle, as long lines formed outside the few pharmacies and bakeries that remained open.

More shelling was reported in the northern city of Chernihiv, where emergency officials said at least 33 civilians had been killed in the bombardment of a residential area.

milies with children fled via muddy and snowy roads in the eastern region of Donetsk, while military strikes on the village of Yakovlivka destroyed 30 homes, leaving three people dead, authorities said.

In Kharkiv, Ukraine’s second-largest city, with about 1.4 million people, residents desperate to escape the bombings crowded the railroad station and squeezed onto trains, not always knowing where they were headed.

In the south, Russian troops appeared to roll from Kherson toward Mykolaiv, another major Black Sea port and shipbuilding center to the west. A US defense official said the Russians may want to set up a base in Mykolaiv ahead of a ground offensive against Odesa, Ukraine’s largest port city, which is also home to a large naval base.

The immense Russian column of hundreds of tanks and other vehicles still appeared to be stalled roughly 25 kilometers (16 miles) from Kyiv and had made no real progress in days, amid fuel and food shortages, according to US authorities.

Karmanau reported from Lviv, Ukraine; Chernov from Mariupol, Ukraine. Sergei Grits in Odesa, Ukraine; Francesca Ebel, Josef Federman and Andrew Drake in Kyiv; Jamey Keaten in Geneva; Lynn Berry, Robert Burns and Eric Tucker in Washington; Edith M. Lederer and Jennifer Peltz at the United Nations; and other Associated Press journalists from around the world contributed to this report.