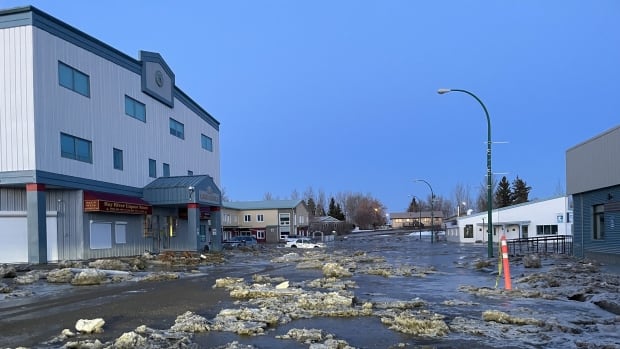 A second surge of water and ice began to push through the community Thursday morning at around 8 am The town is warning residents who are still in Hay River to find high ground or take shelter at the community centre. There may be more surges coming.

An evacuation order, issued late Wednesday night, remains in place for the entire community. Residents who originally went to Enterprise should instead head to Yellowknife, Smith said. RCMP officers are enforcing road closures at Enterprise.

Residents who are still in Hay River should stay put in their current accommodations, according to a 5:30 am update from the town, and do not travel through Hay River “due to hazards throughout the town.”

Evacuation order issued for all of Hay River, NWT

An evacuation order has been issued for the entire community of Hay River, NWT, with some 3,500 residents being asked to head to higher ground or the community centre. 10:07

Hay River is a hub community of over 3,800 in the NWT’s South Slave region. It sits where the Hay River meets Great Slave Lake.

Read Also:  PHAC president reprimanded, yet did not document the fired scientists

Ice shifted overnight but jammed up again. The updated stated water levels remain high and there are ice jams spanning from the West and East channels to the Delancey Estates area.

Smith called for patience as workers assess the damage to the community and come up with a plan to have residents return.

“Some areas are going to take time,” he said. “We’re holding people from coming back into the community until we complete that assessment and determine what return plans look like.

“We’re hearing of water … extensive water pushing through storm systems and really flooding areas that were not even close to the river because of that — water over banks, going into several residential areas.”

The town’s emergency management organization will meet this morning to co-ordinate a damage assessment. Smith said they will need to figure out where it’s safe to operate from and assess damage to their infrastructure.

Smith said they have received reports that at least one person needs to be rescued from a rooftop. Crews had to wait for the sun to rise before tackling any rescues.

Read Also:  On stage of the Battle of Alberta, a beleaguered Koskinen shines for the Oilers

K’atl’odeeche First Nation Chief April Martel said the reserve was evacuated overnight, but a search is underway now for a person who was left behind.

As the floodwaters surged in the reserve, Martel and other workers stayed to look for that person. They eventually had to leave as the water came up fast.

She’s called the RCMP to help with the search and rescue, and a few community members are still searching on the reserve.

“He knows how to do survival mode, so I think he’ll be OK,” Martel said.

Martel said it’s not safe to be in the community right now and a lot of damage has been done.

Watching for a second surge of water

Jane and Rick Groenewegen are some of those still in Hay River. Jane Groenewegen owns several properties in Hay River and is currently staying on the fourth floor of the Cambridge hotel, where she has a view of the river.

Speaking with CBC Thursday morning, Groenewegen said they’re preparing for another surge of water that could come this morning.

She said the surge overnight hastened through Saskatoon Drive, a residential area on the north side of Hay River’s New Town.

It also breached the banks of Riverview Drive, which runs along the east side of town.

“When we got the alert and we got the call from the town to come down here and start going door-to-door and notifying our guests and our tenants, when we stepped outside, Rick could hear the ice was snapping off trees on Riverview Drive,” Groenewegen said.

Water flowed over the road, through a row of houses on Riverview Drive, and down into the ravine next to Groenewegen’s house.

Thursday so far has been sunny and is supposed to be warm, she said, but the question of a second surge still hangs in the air.

“We’re safe where we are. We understand that the power may go out,” she said.

“We’ll be watching to see if another wave of water materializes, and what the impact of that will be. I’ve got my truck pointed in the right direction, full of fuel, ready to go.”

Enterprise, a community of 116 people about 35 kilometers south of Hay River, welcomed about 160 people overnight, more than doubling its population.

The hamlet opened its rec center and fire hall to visitors, setting up quotes. Community members opened their homes to friends and about 20 people took refuge in two empty houses in the community, with others welcomed at the local Cash and Carry.

“There’s approximately 60 to 70 people sleeping with children, infants,” he said. “Pets are tied up outside but we can’t help everybody.”

The town, which relies on trucked water and sewage services, has also been busy keeping water tanks full to serve the unexpected guests.

“As long as people are safe and they’re not in danger, we’re all good, right?”

Quebec COVID-19 hospitalizations on the rise as new variants

LG Electronics to reimburse GM up to $1.9B for Chevrolet Bolt recall