The beekeeping sector is perhaps the least known of the agricultural sector, but certainly one of the most important. In addition to the production of honey, which is of high quality in Spain, and other products such as propolis, pollen or beeswax, hives fulfill an irreplaceable function in nature: pollination. Wild swarms are becoming rarer, so the hives of beekeepers play a huge role in food production.

According to the FAO, bees sit on only one type of flower in each of their journeys in search of food and in a day they can visit up to several thousand, spreading pollen granules that are attached to tiny hairs that intertwine them all. cover their body. Flowers, thus favor fertilization and the growth of fruits and seeds. No matter how much water, manure or phytosanitary products are applied to a crop on many occasions, the crop is entirely dependent on the work of pollinating insects, the most important of which is bees.

It is estimated that bees are responsible for 80% of crops pollinated and the value of world plantations directly dependent on the work of these small animals is between 236,000 and 577,000 million dollars annually, with these insects largely responsible. And not to mention that they are essential for the reproduction of many wild plants that are the basis of almost all ecosystems.

Drought doesn’t even respect the honey harvest – Photo: Patricia GonzalezBut pollination is only one of the services provided by hives. However, the most immediate concern for beekeepers is honey production, which has declined this year. The COAG beekeeping sector estimates a crop loss of between 40% and 50% for two main reasons: the effects of drought and a decline in swarms due to bee-eaters.

The low presence of insects due to water scarcity, which has made it difficult for many species to breed, has made honey bees the main food of this migratory bird. Furthermore, according to the Agricultural Organization, swarms of bee-eaters visit nearby apes to hunt bees and their songs scare away these insects, which remain inside the hive without leaving. This behavior is dangerous in late summer, he says, because the bees don’t come out until the bee-eaters have disappeared, losing the best hours of foraging (the hunt of these insects in search of food). which reduces reproduction and, therefore, decreases in winter population.

Losses in beekeeping by autonomous communities, in Andalusia, the region of Murcia and the Valencian Community, which are estimated to reduce honey harvest by more than 50%. However, regions such as Castilla y León, Castilla-La Mancha or La Rioja will also face a significant drop in production this year. 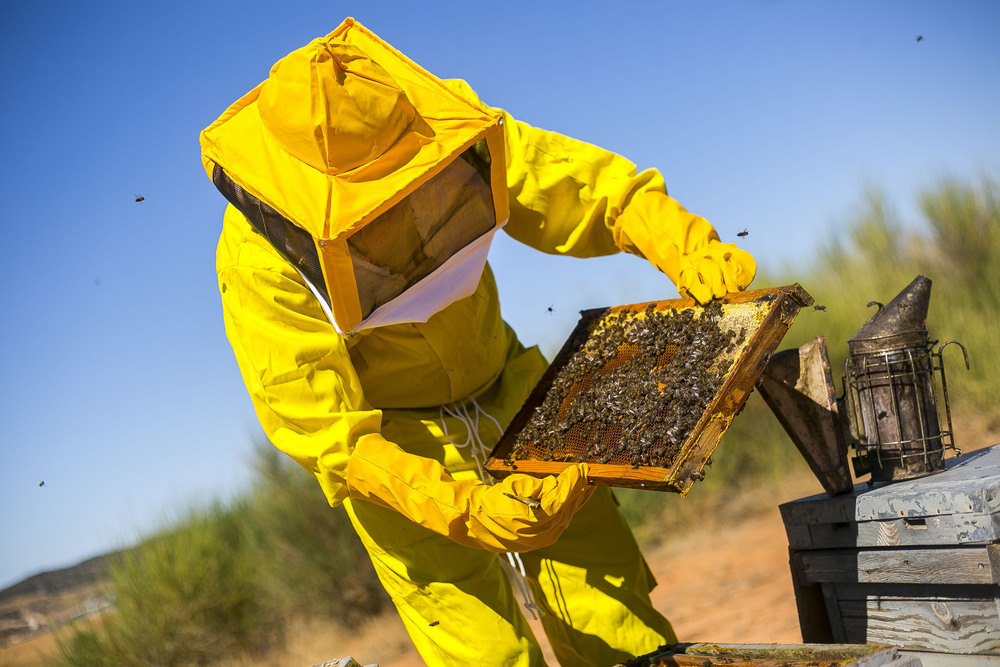 Drought doesn’t even respect the honey harvest – Photo: Reyes MartinezAlong with this problem is the import problem, which is increasing significantly this season. COAG details that between January and June 2022, Spanish operators received a total of 20,243 tonnes of honey (4,221 tonnes more than the same period last year). The level of honey procurement during this first semester was at a much higher level than in the first semester of previous years: never so much honey had been imported into Spain during the first semester of this year.

In addition, cheap honey continues to be triangulated, particularly through Portugal, Germany and Italy. The case of Italy during 2022 is for example: in the first half of the year only 999 tonnes of honey was imported at an average entry price of 1.86 euros, whereas in previous years the country had kept around 150 tonnes of honey at average prices. About five euros, three times as much. 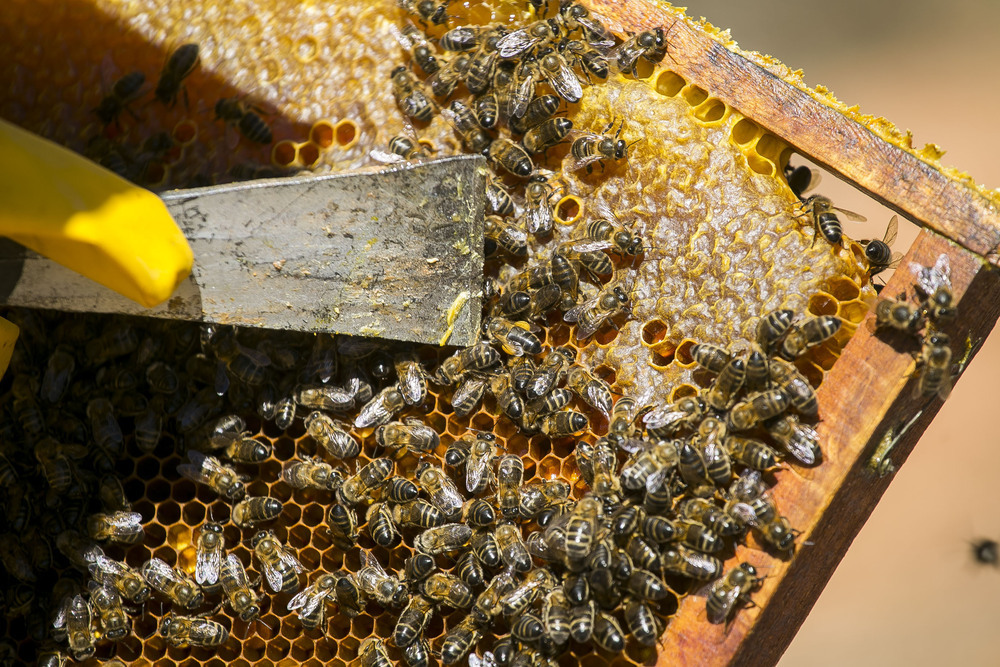 Drought doesn’t even respect the honey harvest – Photo: Reyes MartinezFrom COAG they say that, if honey was paid for at 1.86 euros, there is only one possible origin today: China. Italian honey is similar to Spanish honey and the cost of production is similar, so five euros per kilo is more realistically priced. Moreover, the increase in volume from one year to the next (about seven times more) also raises doubts. Agricultural organizations attribute this fact to the fact that a reduction in the purchasing power of buyers has made them opt more for white brands, which logically use a higher proportion of Chinese honey.

Faced with this scenario, the COAG calls for a specific assistance to beekeepers from autonomous communities that work to reduce the brutal impact of significant losses due to increased costs in activity and incidents of extreme droughts and bee-eaters. does. This assistance can be expressed through Regional Rural Development Programs (PDRs), as already announced by the Government.

Castilla La Mancha. The Union of Small Farmers and Ranchers (UPA) in Castilla-La Mancha has also recently condemned a bad campaign by beekeepers of this community. They abound in the fact that drought and consequent lack of flowers, among other factors, have greatly complicated the year. UPA, Association of Beekeepers of Albacete (ASAPA) and Association of Beekeepers of Cuenca met with Councilor for the Sustainable Development of the Community to consider ways to work and collaborate due to the area’s importance in biodiversity and the environment Is. Apart from talking about helping beekeepers with the necessary professional vehicles, work has started on the lines of collaboration to study and deal with the damage caused by bee eaters.

The beekeepers of Castilla-La Mancha had, until this campaign, an aid to support the acquisition of vehicles, which were considered essential as vans and trucks are essential equipment in the daily lives of professional beekeepers. Since this line of aid is not included in the new order, UPA Castilla-La Mancha, ASAPA, and the Cuenca Beekeeping Association have met with the Minister of Sustainable Development, José Luis Escudero, the Deputy Minister for the Environment, Fernando Marchán, and the Union for Sustainable Development. General Director of the Natural Environment and Biodiversity, Felix Romero. The meeting also addressed possible action and joint collaboration to combat bee-eater harm.

Beekeepers have moved the Minister of Sustainable Development that vehicles in the beekeeping sector are essential when it comes to providing water points to bees, benefiting both beekeepers and wildlife. The fleet is old, so a line of help to refurbish it would be good, say the pros. Vehicles are another work tool for beekeepers and were a major support for the transformation, mobilization and marketing investment and feasibility of forest products in order to aid investment in forest technologies, although this is no longer considered , looking at other potential investment channels such as the Moves III Plan.

To this we must add that the price of diesel has skyrocketed, which has affected the beekeepers more than other farmers, as they continue to do their work with the hives despite needing more or less than the other professionals in the farm. Cannot use diesel for agriculture.

It was also highlighted during the meeting that beekeeping constitutes an activity of great importance in Castilla-La Mancha, both the economic impact of the production of honey and other bee products and its importance in maintaining ecological balance, conservation and protection. Because of its fundamental role. Plant diversity that depends on pollination helps to increase the biodiversity of forest ecosystems and takes advantage of resources not used by any other activity. This has been another basis for the ministry and the federations to assess future support and other lines of joint work.

Similarly, the councilor himself collaborated with beekeepers to promote lines of cooperation, improve marketing and open up markets, as well as take advantage of courses, activities and conferences to give maximum visibility to the area, as well as raise awareness. has been proposed for. Benefits of beekeeping on the environment and biodiversity. During the meeting, it was revealed that the future of the region is not only about marketing, but also about linking the honey product with the ecosystem service of pollination, and supporting the development of this activity within the Natura 2000 network. is with. natural area of ​​the region.

To conclude, the UPA has requested the Ministry of Sustainable Development to design projects in collaboration with the University of Castilla-La Mancha, beekeepers and private entities, to study the mortality rate of bee-eaters. How is it affected? Pittie and colleagues conduct studies that can predict possible future situations, prevent these attacks, and design policies accordingly.

The bee-eater is one of Spain’s most colorful birds. From Spain and many other countries, as it lives in a large part of Eurasia and North Africa, where it breeds, winters south of the Sahara. Its eating habits are, in general, beneficial to humans, as it captures insects with wings of a certain size, such as wasps, dragonflies or butterflies, whose populations it helps control. The problem lies with beekeepers, as bees are also an important part of their diet (hence their common and scientific name, Merops apiaster) and in some places and circumstances they can become a problem. If you discover an area with hives, it is not uncommon for them to become used to easy feeding and a group of these birds (it is common for them to breed in colonies of variable size) by feeding in the same spot all summer. The damage to the bee population could be significant. And it is not easy to solve the problem, because saving insects from attack of these birds is not an easy task.