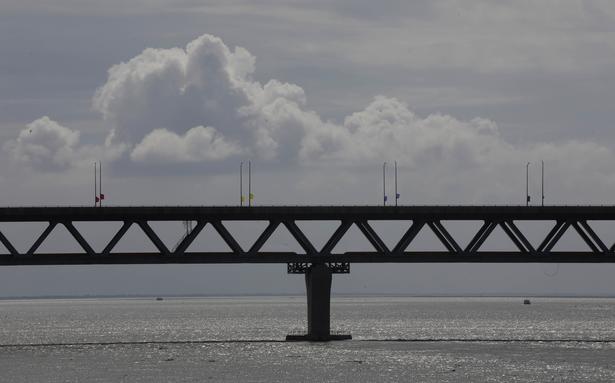 Bangladesh recently inaugurated its longest bridge over Padma River. It also clarified that the Padma Bridge is not a part of China’s Belt and Road Initiative.

Bangladesh recently inaugurated its longest bridge over Padma River. It also clarified that the Padma Bridge is not a part of China’s Belt and Road Initiative.

the story So Far: In a historic moment for Bangladesh, Prime Minister Sheikh Hasina inaugurated the Padma Multipurpose Bridge over the Padma River on June 25, calling it a “symbol of pride”. This bridge is currently the longest in the country. The inauguration took place 20 years after Ms Hasina laid the foundation stone. The bridge will connect about 30 million people living in the less developed south-west region of the country with the capital Dhaka and other regions.

The infrastructure project, seen as a symbol of Bangladesh’s resolve and its successful development journey, was self-financed by the Bangladesh government despite experts’ apprehensions. The bridge has been constructed at a cost of $3.6 billion. In addition to its potential to transform trade and communication in the region, the government estimates that the Padma Bridge will increase the country’s GDP by 1.2 percent.

Days before the inauguration, the Bangladesh government issued a clarification, rejecting reports linking the construction of the bridge to the China-led Belt and Road Initiative (BRI). In a statement after a media invite for an event, the Ministry of External Affairs said that the Padma Bridge was financed by the government without any loan assistance from abroad. A Chinese construction firm was involved in the construction of a bridge for Bangladesh.

The Story and Significance of Padma Bridge

project timeline: Since its formation in 1971, the construction of a bridge over Padma has been Bangladesh’s most ambitious project to bridge the gap between developed and non-developed regions. In 1998-99, a pre-feasibility study was conducted for the first time under the then PM Sheikh Hasina. The project was restarted in 2009 after Ms Hasina returned as Prime Minister. In 2012, the World Bank canceled its $1.2 billion funding, saying it had “credible evidence” of high-level corruption among Bangladeshi officials. “The World Bank cannot, should not, and cannot turn a blind eye to evidence of corruption … In light of the inadequate response by the Government of Bangladesh, the World Bank extended its $1.2 billion IDA (International Development Association) credit in support of the Padma Multipurpose Bridge project,” it said in a statement in June 2012.

Following this setback, the Bangladesh government took matters into its own hands and decided to self-finance the ambitious project. In 2014, an agreement was signed with China Railway Major Bridge Engineering Group, a state-owned entity in China. Construction began in the same year.

features: The Padma Bridge, the longest ever in Bangladesh, was handed over to the government earlier this week. The 6.15 km long and 22 m wide main structure consists of a four-lane highway with a 3 km long viaduct and about 12 km of access roads connecting the neighboring districts.

It connects the Mawa Bank to the north and the Janjira region to the south of the Padma River, which is known for its vast amount of water, which makes it look like a sea for most of the year. According to the project website, the Padma Bridge will connect Luhajong in Munshiganj district with Shariatpur and Madaripur districts, connecting the south-west with the northern and eastern regions.

There is a railway track on the lower level of the bridge, which is expected to open by 2024. This railway line will significantly reduce travel time between India and Bangladesh – providing a significant boost to trade and commerce between the two countries. Currently, Maitree Express covers 400 kms from Kolkata to Dhaka Cantonment in 10 hours. Officials say that after the inauguration of the railway line, this distance will come down to about 250 km, which the Maitri Express can cover in about three hours.

Congratulations to #bangladesh to open #PadmaBridge Which is a multi-purpose road-rail bridge over the Padma River with a total length of 6.241 km, constructed by China Major Bridge Engineering Co., Ltd. at a total cost of US$3.6 billion. pic.twitter.com/TZb1i0xmum

Bangladesh’s explanation about the bridge

Last week, a group called the ‘Bangladesh-China Silk Road Forum’, or BCSRF – was launched in 2019 to “focus on sustainable relations between the two countries under China’s Belt and Road Initiative (BRI). Panel discussion on 22nd June. The topic of discussion was ‘The Padma Bridge: An Example of Bangladesh-China Cooperation under the Belt and Road Initiative’, with the Chinese Ambassador in Dhaka being invited as the chief guest of the occasion. The BRI, launched by Chinese President Xi Jinping in 2013, is a multi-billion dollar initiative aimed at financing and building infrastructure projects, especially in developing countries, to increase its influence around the world.

Although Bangladesh was not happy with these incidents that happened hours before the inauguration of the Padma Bridge, the Ministry of External Affairs (MoFA) issued a statement condemning the efforts to link the Padma Bridge project with the BRI. ,[The] The Ministry of External Affairs has categorically stated that the Padma Multi-Purpose Bridge is fully funded by the Government of Bangladesh and that no foreign fund from any bilateral or multilateral funding agency has contributed financially to its construction. The ministry acknowledged that both Bangladeshi and foreign companies were engaged in the implementation of the project.

Against this background, the spokesperson of the Chinese embassy said that the bridge was built entirely with Bangladeshi funds. “We are proud that a Chinese construction company was involved in the construction of the Padma Bridge … Company” [China Railway Major Bridge Engineering Corporation] who built a bridge over our mother river [Yellow River] Decades ago, the first longest such bridge was built [over the Padma] outside China,” said the Chinese official.

According to the agency’s report, the ministry also summoned the head of the embassy, ​​Mr. Hualong Yan, who was informed of “the displeasure of the government”. Bangladesh reportedly told the envoy that the Chinese firm involved in the project acted only as a contractor. The Chinese embassy informed the organizers of the event, following which the panel discussion was cancelled.

Over the years, China has steadily increased its investments in Bangladesh after the two countries launched their strategic partnership in 2016. Bangladesh is one of the largest recipients of funding for infrastructure projects under the BRI, with more than $26 billion in Chinese investments and more than $38 billion. funding commitments.

While the South Asian country is keen to develop its infrastructure, it has taken a cautious and selective approach to handling its economic ties with the BRI amid growing concerns over the Chinese debt trap. The initiative has attracted allegations of debt-diplomacy, especially after Sri Lanka handed over its Hambantota port to China in 2017 as a debt swap. Malaysia has also postponed several projects under the BRI, citing cost reassessment.

In addition, the BRI has been a major cause of contention between India and China as a part of the corridor passes through Pakistan-occupied Kashmir. Bangladesh and India have close bilateral relations. So in order to strike a balance and not disturb its neighbour, its “most important partner”, Bangladesh is treading the path of caution.

Read Also:  'Why would we die if the Afghan army didn't want to fight?' US President Joe Biden