EXPLAINER: What in the world is the Olympic Truce? 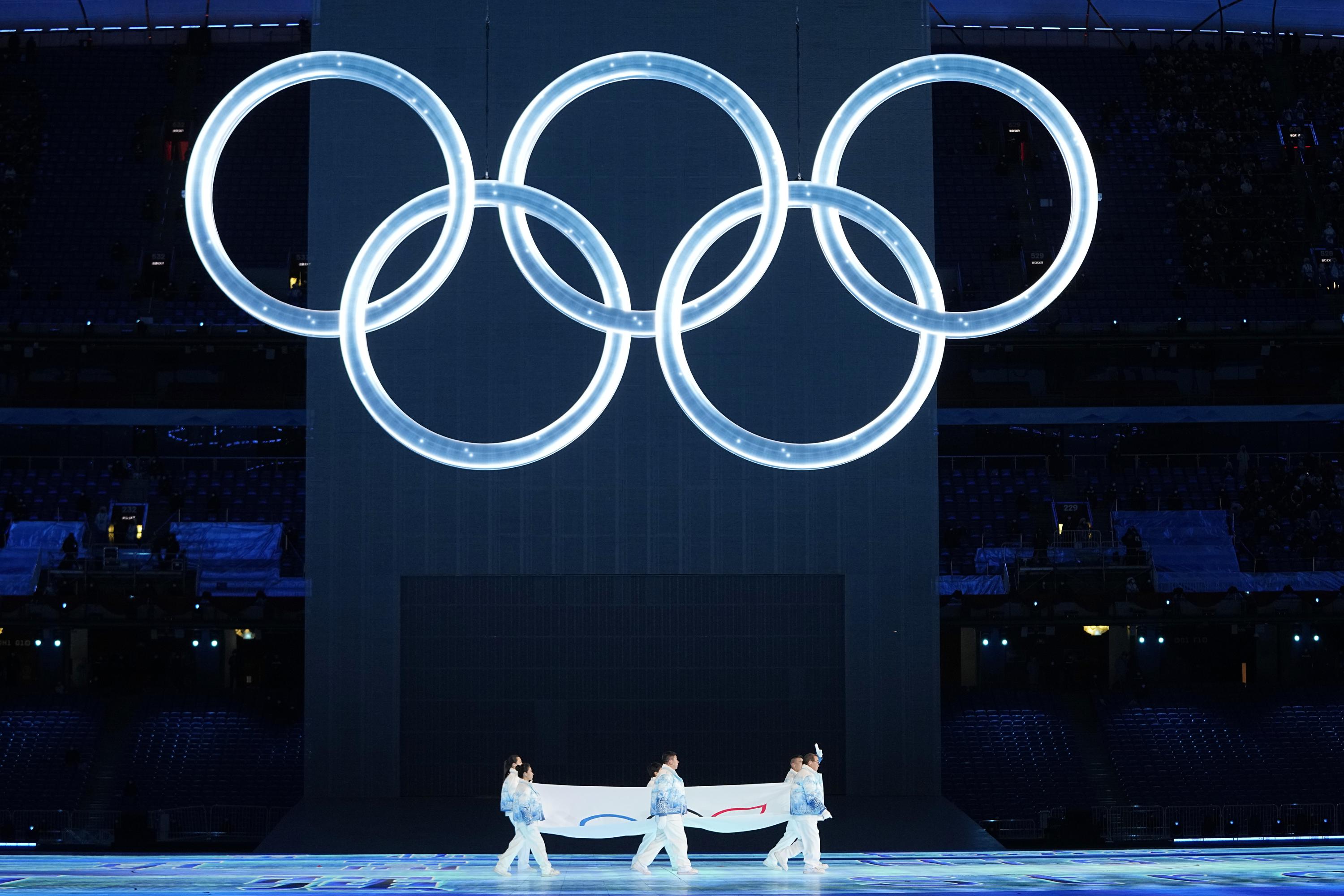 BEIJING ( Associated Press) — “Observe your commitment to this Olympic Truce,” International Olympic Committee President Thomas Bach beseeched the international community at the opening ceremony of the 2022 Winter Olympic Games in Beijing. “Give peace a chance.”

Whether echoing John Lennon or not, it’s a plea that has been issued time and time again to little avail — an apparent exercise in futility. As the Games unfold against the backdrop of heightened tensions between Russia and the West over Ukraine, even Bach himself had palpably distanced the IOC from the Olympic Truce in the runup to the opening ceremony.

“We can only appeal: ‘Please respect your own commitment,'” he said at a Feb. 3 press conference where he labeled the UN resolution merely a “highly symbolic act.” “We can only go so far and say: ‘Please do not touch the Games.'”

Every two years, the host country of the upcoming Olympics introduces a UN resolution that other member states can co-sponsor. The truce is intended to secure safe passage for athletes during the Games and, in the long term, promote the idea of ​​working toward world peace.

A UN resolution upholding the Olympic Truce has been passed 15 times. The continuous renewal of each Olympics is based in the idealism that undergirds the modern Games and perhaps international law in general: It’s aspirational.

Just what is the Olympic Truce? And what role does it have to play on the rickety stage of international affairs?

HOW LONG DOES THE TRUCE LAST?

WHEN DID THE TRUCE BEGIN?

The modern Olympic Truce was first established in 1993, for the 1994 Lillehammer Winter Olympics. But its roots are ancient and grounded in the concept of “ekecheiria,” dating back to the ninth century BC, when Greek city-states were otherwise ceaselessly at war with one another (though they didn’t necessarily do a good job adhering to the pact, either).

Baron Pierre de Coubertin founded the modern Olympics in 1896 with the ideal of building a harmonious future, but contemporary formalization wouldn’t come until the post-Cold War era, when athletes from the dissolving Yugoslavia needed to participate. In the interim, some Olympics were canceled entirely.

WHAT ABOUT ALL THE FIGHTING SINCE 1993?

There’s been some sort of ongoing hot conflict during every modern Olympics. Despite that, no country would cop to intentionally breaking the Truce, says J. Simon Rofe, a reader in diplomatic studies at the University of London’s SOAS and an expert in sports diplomacy.

Basically, it comes down to semantics and mental gymnastics. Instead of “openly flouting the Olympic Truce, they may say it doesn’t apply. They may say, ‘This isn’t what it’s meant for,'” Rofe says. “But no one’s just gone: ‘Not today, thank you.'”

WHAT ARE THE CONSEQUENCES FOR BREAKING THE TRUCE?

There really aren’t any. At most, an aggressor takes a hit in the court of public opinion, but that typically matters little.

“If we are getting in the middle of tensions, disputes and confrontations of the political powers then we are putting the Games at risk,” Bach plainly told reporters at a Beijing press conference.

NO CONSEQUENCE? THEN WHAT’S THE POINT?

While the Truce itself doesn’t establish lasting peace, Charlotte Ku, an international law expert and professor at the Texas A&M University School of Law, notes that the Olympics are a prime venue for informal talks as heads of state and government (from non- boycotting nations, that is) gather in Beijing: “So to that extent, there might be an opportunity to resolve things or at least find a framework for further conversation.”

Plus, Rofe adds, there’s nothing wrong with some ambition.

“I think the Olympic Truce serves a valuable purpose providing a model of behavior in international affairs, and gives the opportunity to what sport can achieve,” he says.

HAS RUSSIA AGREED TO THE TRUCE?

Russia was one of the 173 countries to co-sponsor the resolution for Beijing 2022 and Stepan Kuzmenkov, representative of the Russian Mission to the United Nations, exhorted everyone to hold true to the Truce. But he also took pains to note that the collective punishment of athletes was unacceptable. Russia is not competing in these Games as Russia; its athletes are under the banner of the Russian Olympic Committee because of doping sanctions.

COULD RUSSIA BREAK THE TRUCE?

The answer to this question is largely dependent on who is evaluating violations. In Russia’s estimation, it has never broken the Truce — even in 2008 and 2014 — because it viewed the into South Ossetia and then Crimea as settling domestic matters. The Olympic Truce is established by the United Nations, which does not have jurisdiction in domestic disputes.

(Of course, Georgia, Ukraine and most of the international community don’t see matters the same way.)

An invasion of Ukraine, which the United States contends is imminent and Russia strenuously denies, would mar the sanctity of the Olympics, delivering a blow to the host country, with whom Russia has drawn ever closer in recent years. Even if an invasion happened, it’s possible Putin would wait until the Games’ conclusion so as not to embarrass Chinese President Xi Jinping.

WHY DIDN’T THE UNITED STATES CO-SPONSOR THIS YEAR’S TRUCE RESOLUTION?

The US joined the UN consensus adopting the resolution but was not among the 173 (of 192) members that co-sponsored it. That marked a change from the Tokyo Olympics, when the US did co-sponsor that resolution. In its explanation, the US Mission to the UN took issue with parts of the China-introduced resolution. that it deemed not “inter-governmentally agreed language.”

Those paragraphs pertained to Beijing’s vision for the Olympics — inspiring youth and promoting enthusiasm for winter sports, social progress and world peace — and a commitment to delivering “Olympic Games that are green, inclusive, open and clean,” in line with the US Sustainable Development Goals. It’s likely, Ku says, that the US just didn’t want to give China any cover.

US allies in the Indo-Pacific “Quad” alliance — Japan, Australia and India — also did not co-sponsor, but other allies like France and Germany did sign on.

WHAT ABOUT THE UNITED STATES’ OWN HISTORY WITH THE OLYMPIC TRUCE?

The US has had its own share of apparent violations of the Truce — wars in the Middle East, namely. In 1998, the IOC implored the US not to violate the spirit of the Truce by engaging in military action against Iraq.

“Not to my knowledge is any of the decision-making or thinking that the president and his senior policy leaders are undertaking affected by sporting events,” then-White House spokesperson Mike McCurry retorted.

In the wake of the Sept. 11 terrorist attacks, however, it was the IOC and UN that bent for a US retaliatory military campaign in Afghanistan. As the host country for the 2002 Winter Olympics, the United States introduced a Truce resolution that did not call for the cessation of hostilities in a departure from precedent. The IOC’s then-director general, François Carrard, said the body had to be “realistic” and was “not expecting anything else” beyond the safe passage for athletes.

WHAT’S THE RELATIONSHIP BETWEEN THE IOC AND THE UNITED NATIONS?

The IOC and the UN are separate entities but often partners. The IOC has permanent observer status at the United Nations and the UN flag has flown at competition sites since the 1998 Nagano Winter Games. 1998. The two organizations profess to espouse similar goals, and the UN has affirmed sports as a key enabler of its sustainable development goals.

Note, the IOC actually has more national committees than the UN has members.

Union liquidated him in a forceful final

Alamos Gold Adds an EV to the Matachewan Young-Davidson Mine – Wawa-news.com

“When you compete at the highest level, every detail counts”