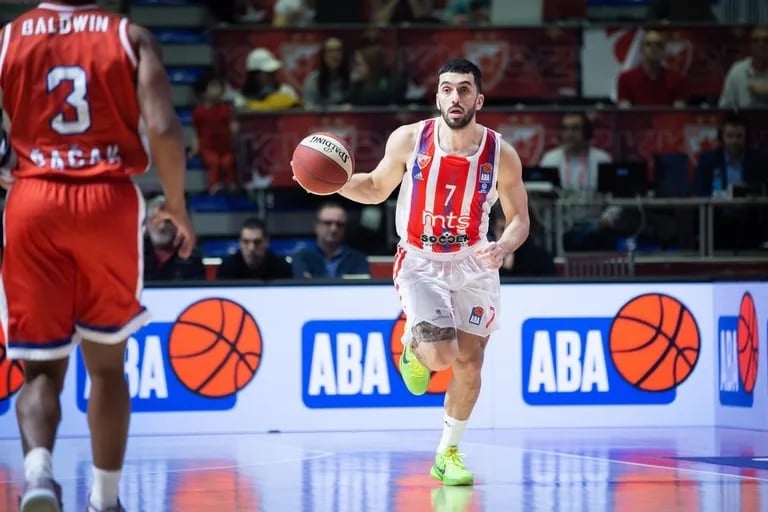 After his departure from the Dallas Mavericks, Facundo Campazzo got to shine again. cordovan debuted with a key shirt red star belgrade and his new team Defeated Borac Mozart 86-57 Serbian ABA League matchday 12. The base of the Argentina national team gave a good presentation And the Balkans is already getting fans of the team excited. Luca Vildoza, Feku’s teammate also had winning minutes.

This may not have been the last Thursday for the Euroleague, but facundo campazo He first wore the jersey of his new team, Estrella Rosa, a club that had presented him as their player a little less than a week earlier. The opponent of the new team from Córdoba was Borac Mozart from the city of Cacque and it was a huge victory for the Belgrade guys by 86 to 57 and they had point guard one of the figures team up with 11 points, 3 rebounds, 5 assists, 2 steals and a final rating of 14. All played in 19:09 minutes.

But it wasn’t just his numbers that drove Campazo’s presentation. True to his style, basketball player He already showed all his magic with a girdle assist, reaching under the ring and surprising the attendees with various actions This shows the kind of player he is. Also in the official account of the league you can see a compilation of your best plays and it says “Feku Campazzo is already giving a show in Belgrade”. The fans who filled the Belgrade team’s Pionir Pavilion applauded the work done by the rookie, who is raising expectations for a team that is the leader of the Serbian ABA League by 21 points and which is also seeking to become Euroleague champion.

your partner Ognjen Dobrik was voted MVP (Best player) of the match. The 28-year-old forward scored 15 points, grabbed 4 rebounds and finished the game with an efficiency of 21.

It is worth noting that Campazzo He became a free agent last November, when after appearing in just 10 games in the American League season, the NBA’s Dallas Mavericks decided to cut the player. Real Madrid, the club where Campazzo remained until mid-2020, had an option called the “right of first refusal”, which involved matching the offer made by the Serbian unit and keeping the player. But the club from the Spanish capital preferred not to make any movement and Cordovan traveled to Serbia.

The point guard of the Argentina national team arrived in Belgrade on the night of Saturday, 17 December, and this Monday, 19 December, he started training with the team led by DT Dusko Ivanovic. there you have as a partner of his compatriot Luca Vildoza, who arrived a few months earlier from the Milwaukee Bucks and also saw action in the Belgrade team’s win. The man from Mar del Plata entered as a starter, He scored 3 points, pulled down 2 rebounds and distributed 5 assists in 14:38 minutes.

Despite the fact that he had to play his matches for the local league, Facundo Campazo and Luca Vildoza they spent good night and christmas together and they are shown celebrating with their families in the new city that shelters them.

Red Star’s next game for the Euroleague is against Barcelona next Friday, 30 December, which also features Argentina’s Nicolás Laprovitola. In any case, it will be necessary to see if he can appear in that event, that is, Red Star (Crvena Zvezda in Serbian) wants to correct some minor irregularities that he made to register the basketball player. keeps in the maximum continental competition,