Fan convicted of Boca bus attack in 2018 was arrested at the memorial: this is how he tried to violate his right to entry Matias Sebastian Nicolas Firposentenced for Rock the Boca Juniors bus at the preview of the 2018 Superclassico along River Plate For the second final of the Copa Libertadores, this Sunday was arrested by personnel of the Autonomous Directorate of Sporting Events of the city police. to commemorate,

The arrest happened before the match between Rivera and Central Cordoba for the Professional League, when police officers identified the person involved. When trying to login through the family channel with the card of a minor and another person,

Agents recognized him and followed him to the Tribuna Segura line, where they eventually delayed him, did not allow him to enter the stadium, and issued a traffic ticket. Specialized in large-scale events in charge of the Public Prosecutor’s Office selsa ramirez,

Firpo was admitted indefinitely due to the incident in 2018. At that time, he had agreed to a sentence of 2 years 4 months in a brief trial.

“Thanks to the Tribuna Segura program, we stopped trying to enter the monument to Sebastian Firpo with someone else’s card. He tried to infringe on the right of entry by misrepresenting his identity. Now he has to give a new explanation before the justice.”, he wrote on Twitter Marcelo D’AlessandroCity Security and Justice Minister. 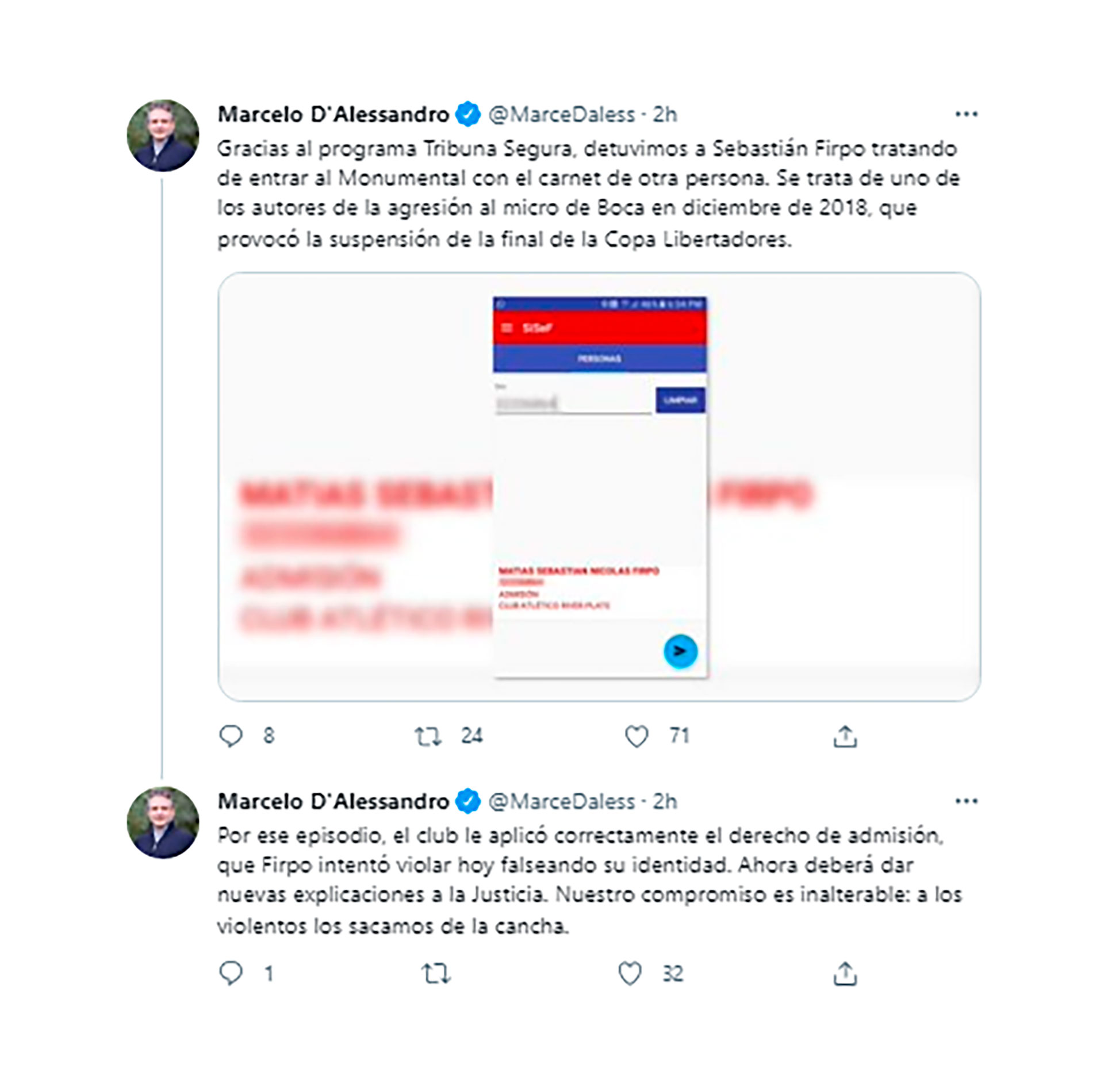 On December 4, 2018, Firpo was arrested in La Matanza by the Police’s Department of Criminal Conduct and the city’s judicial investigative bodies. In the process he confiscated a ticket for the monument’s upper centenary stalls, which he had purchased via the web. He was a member of the club from 2009 to 2012. He became a member again in 2015.

He was traced by investigators at the time, thanks to an image in which he was seen entering the stadium wearing the same clothes as at the time of the attack. A few seconds ago, he had passed a ticket in his name on the turnstile.

“I go on the field with friends and family. It was a moment I didn’t know how to control an impulseWhich I am sorry because I know I was wrong”, he declared after the sentence and added: “i’m not gonna do that kind of thing, It hurts me to go through that moment,

,I am sad that I am not able to go to court now., I apologize to the institution and the fans, because this is the place I love. We all make mistakes, it’s good to learn from mistakes. I apologize to the society and the club. I don’t believe myself what the press said: I’m not a gang member or a murderer. I didn’t want to kill anyone. As the police repressed, the people responded with enthusiasm in an instant. Nothing else,” he closed.

That said, he did not comply with the ban on attendance at the stadium, but despite his finesse, he detected them anyway.

Armani’s brilliant double defense in River Plate win against Central Cordoban
The game that Maradona has always overlooked: Enzo Francescoli and Beto Alonso’s debut in San Paolo with 85,000 souls to see him against the river
Intimate Pinola: how he managed to recover, his role with the latest and proposals for the future