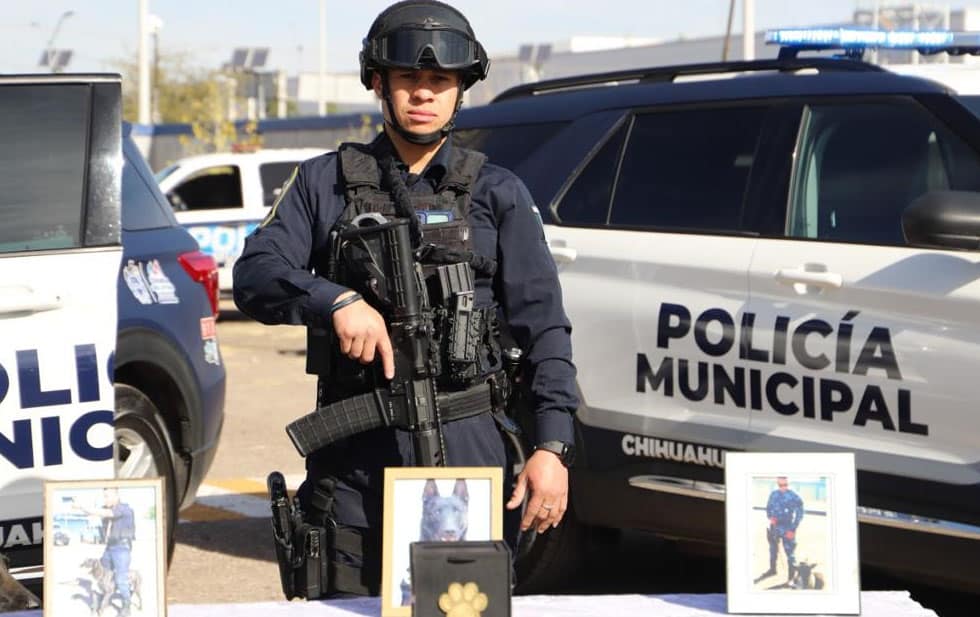 chihuahua, chih.- Jack, a municipal police dog who served and protected the Chihuahuan community for three years, was fired with honor, receiving a warm and well-deserved tribute from his fellow humans, days after his death and In whose life the work resulted in significant police intervention.

This pair of Dutch Shepherd breed ended their last days due to a condition that no longer allowed them to get up or recover, but not before they spent a large part of their lives caring for others, fighting crime Always loyal to his mentor and fellow policeman, Antonio Rodríguez, with whom he had been patrolling the city’s streets for three years.

The affection and attachment that Antonio and her shared went beyond the employment relationship, as they were confidants, inseparable friends, and faithful to the end, which is why, in this case, upon death, and as a matter of respect, samples are common. They are usually cremated and sometimes buried in the same training camp where they spent most of their time fighting illegal actions in the urban area and rural areas of the municipality.

Antonio decides to keep an urn with the ashes of whoever was his faithful friend during the last years of his existence and who died at the age of five.

“Jack was a special dog, obedient, active, playful and we spent a lot of work and family time together. Since we first met we had an instant connection, I knew this was it for me. The void left in me by leaving cannot be replaced by another couple”, were the words expressed sadly by their owner and manager during the farewell ceremony.

Thanks to the performance of these samples, significant apprehension has been achieved, as they come into action when a risk to the integrity or life of human elements is imminent. Their agility and speed cannot be replaced by humans in any way, hence the importance of relying on them to neutralize criminals or save the lives of potential victims in various scenarios.

From the start of their working lives, dogs live an average of nine years as faithful servants due to the physical and psychological stress they face. Later they retire and are handed over to the same policemen with whom they lived, to take care of them till they die.

At present, the Directorate of Municipal Public Security (DSPM) has 14 dogs of Belgian Malinois, Dutch Shepherd and Golden Retriever breeds, which are trained and groomed by the best professionals to provide security to the citizens.

With sirens, a precise formation and a roll call in which Jack’s name was shouted in unison, it was as if the police were saying goodbye to another group of them, whose energy and obedience had contributed to improving the safety of Chihuahuas. gave.