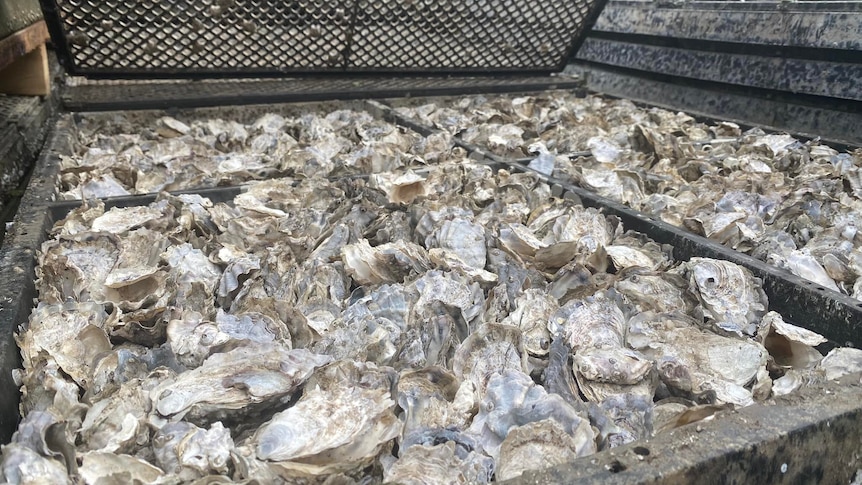 A deadly oyster disease first detected in Port Stephens a year ago has now returned and threatened to put many growers out of business.

QX disease is not harmful to humans, but the parasite infects Sydney rock oysters, causing them to lose their position during the winter and die.

Don Burgoyne’s family farm has been operating in Port Stephens for more than 60 years and is one of the estuary’s largest producers.

He said the outbreak, on the back of months of rain that have halted harvesting, would cause some growers to lose everything.

“It’s so painful, some of them are small businesses with less resilience, or fewer resources to get something like this,” he said.

“I heard that there are eight out of 41 farmers in Port Stephens, especially around the Karua area, who are looking to move away, some of them after cultivating five generations of oysters.”

Mr Burgoyne said he was determined to get his business through the outbreak, but his losses are significant.

“It kills up to 90 percent of your crop and what’s left doesn’t even grow.

“So we’ve lost about half a million dollars to us in our teens by now, and that includes some that were up for harvest.”

“The people of Karua, Oyster Cove and Tilligree Creek have already lost their salable crops.

“They’re trying to get back in two to three years something that’s ready to sell.”

Port Stephens MP Kate Washington this week met with local producers, including Stephen Cole, whose operations have been badly hit.

He is concerned for the future of the local industry, worth $8 million a year to Port Stephens.

“We have an estuary in crisis, we have oyster farmers who want to move away from the industry, some 5th generation farmers because they can’t see the way forward,” she said.

“We have entire areas where oyster deaths are 100 percent due to this disease.

“This is having a huge impact on local oyster farmers and the entire oyster industry in Port Stephens.”

Ms Washington confirmed that many growers have already applied for grant aid from the state government.

Agriculture Minister Dougald Saunders said the outbreak was significant and the Department of Primary Industries was providing advice and support to growers to manage and control the spread.

Mr Saunders said producers can apply for natural disaster grants and low-interest loans, but he acknowledged that this would not be suitable for some.

“For some people a loan interest loan may not be what people are realizing they want to do at this particular point, and I completely understand that,” he said.

“We need to make sure the industry feels supported, but there is no quick, easy solution.”

ABC Newcastle will deliver a wrap of the week’s news, stories and photos every Wednesday. Register here.

Australia calls for de-escalation of tension in Taiwan Strait

“Jefferson Farfan is no longer in football”: Silvio Valencia lights up the network with ‘Data’ and explains why Famous

Odyssey Sims returns to the Lynx as a more mature, experienced player