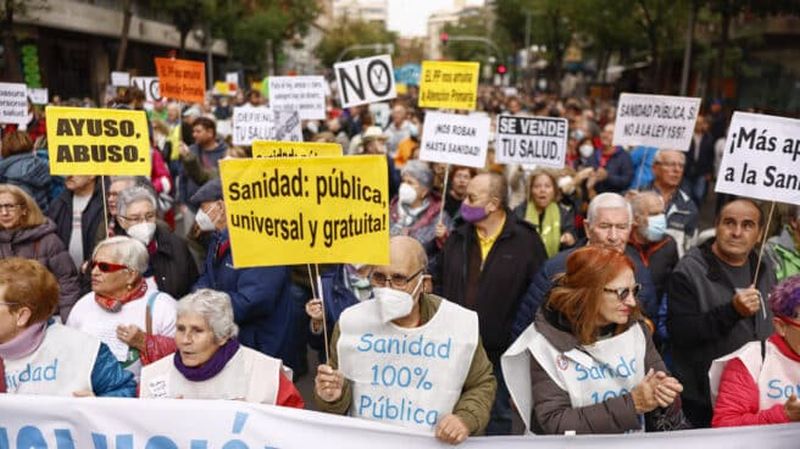 The health budgets of all autonomous communities, which were recently approved for the new year, keep primary care low. The burden of care in primary care centers, the first level in protecting the health of the working class and popular sectors, has increased by 40% in many communities, as reported by the Spanish Society of Emergency and Emergency Medicine (SEMES). Workers and workers are facing cuts since 2010, only 47.2% of public health workers in the entire Spanish state are permanent employees.

In primary care, the level at which less spending is allocated, there are 0.77 doctors and 0.66 nurses per 1,000 residents, according to health ministry data. Many health workers have to work for more than two people, in two shifts, without following rest rules and with dangerous levels of exhaustion.

Despite a 7.7% increase in the autonomous communities’ budgets in health, below the level of inflation, public health remains in the bones. If the EU has an average public investment of 2,244 euros per inhabitant, in the Spanish state it barely reaches 1,808 euros, with a large disparity between regions, Madrid being the autonomous community that invests the least with 1,446.13 euros. ,

Also, wage growth in the last year has been much less than the rise in prices. The wage increase approved by the majority of unions in Catalonia between 2022 and 2024 has been 9.5%, compared to an inflation of 11%. This increase for public employees is not in line with the Consumer Price Index (CPI) and represents a loss of purchasing power in an inflationary situation. Faced with this situation, the Medgates de Catalunya union has called for a strike on January 25 and 26 in all care levels and professional categories. The Federation of Organization of Public Services of the Interindividual has also given a strike call for all levels of the next 24 and 25. From the union they confirm that “the conditions are uncertain”.

In Madrid, primary care doctors also resume a strike that began on 21 November and which they suspended on 22 December. They resume fighting before zero progress of the AMYTS union talks with the Community of Madrid. Already in January there was a three-day strike in additional hospital emergencies on the 9th, 10th and 11th of this month. Extra-hospital emergency workers have been on strike since October 27, at which time AYUSO reorganized 80 centers to participate with 40 workers. 26 of them do not have a single doctor. Several mobilizations of workers and users in the community are also planned in the coming weeks.

On January 17 and 18, Valencians go on strike in the country’s toilets. The Valencian Community-Medical Union (CESM CV) calls for a strike at all levels of care. If the health ministry does not roll back the post-pandemic drop in service, they will go on strike again. The association confirms that they barely have three minutes to see each patient in the face of a huge waiting list. Schedules of 45-50 patients arrive that are inconsistent with providing quality care. Many hospital professionals work three shifts a month and 70 hours a week. Overtime pay is much less than double that of normal hours.

A strike by primary care workers has been called in Andalusia on 27 January, called by the Andalusian Medical Union. The reasons are the same as in the rest of the state, an autonomous community that has grown due to the fourth lowest investment in health, waiting lines, schedules for more than 40 patients, and less time to attend them.

In Extremadura, the SIMEX union has called for a strike on 26 and 27 January. They are fighting for the Extremadura Health Service to comply with the demands already signed in January 2019. On December 23 and 24, there were also significant strikes in the Valentine Health System. For 1 February, the Medical Union of Navarra has called for an indefinite strike in primary and hospital care.

The central government policies of the PSOE and Unidas Podemos and previous governments, together with the policies of the autonomous governments, are responsible for the total precariousness of public services, where temporality and outsourcing, against a quality service, are the common currency. It is also the responsibility of the bureaucracy that runs the majority of unions, which is dedicated to acting as a containment dam and putting the union firm under constant cutbacks and strikes.

The union leadership called on the coordination of all combatants to implement a total state strike of public services in the Spanish state. Demand immediate hike and equalization of wages of all health workers and professional categories as per CPI, which calls for ending outsourcing, transfer of all workers to permanent staff and eviction without pay of laboratories and private clinics, so that it can be integrated. The public health system is under the control of its employees and users. Because our lives are more valuable than their earnings.

We have set a target of reaching 10,000 connected associates in the coming months, and we propose to you.

Can we reflect the reality from below and fight the big media of power, it also depends on you.

To keep growing, join the community of La Izquierda Diario.