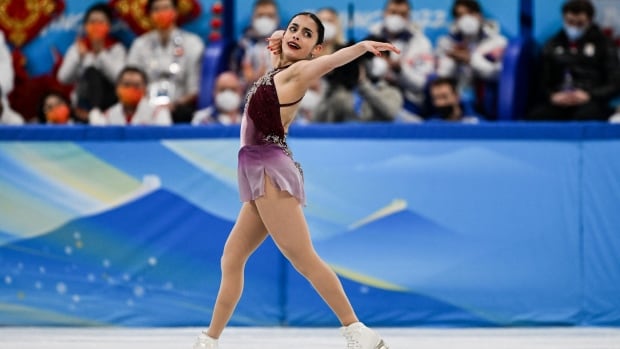 Figure skater Madeline Schizas launched Canada into the final of the team competition with a personal-best performance in her Olympic debut in Beijing on Sunday, giving her team a chance to defend the gold medal it won in Pyeongchang four years ago.

But a last-place skate from Roman Sadovsky in the men’s free program soon after makes even a podium finish now seem challenging for the Canadians.

Schizas, of Oakville, Ont., native posted a score of 69.60 to finish third in the women’s short program, moving Canada from momentarily from eighth into fourth on the overall leaderboard, and into the final alongside the Russian Olympic Committee (ROC), US , Japan and China.

Skating sixth of 10, the 18-year-old occupied the top spot until Japan’s Wakaba Higuchi moved past her with a score of 74.73. Higuchi finished second behind winner Kamila Valieva of the ROC, who finished with a score of 90.18.

Madeline Schizas of Oakville, Ont., skated to a personal best 69.60 points in the women’s short program portion of the team event at Beijing 2022. Her third place finish allowed Canada to qualify for the free program medal round. 6:23

Schizas admitted to having some nerves prior to the event.

“It’s my first skate at my first Olympic Games. It’s almost so surreal to be here and I was really excited to support my team today as part of the team event,” Schizas said. “I was a little bit nervous before today, about being a part of the team and skating individually, but they gave me so much support and I just loved the experience.

“I have been training so consistently and so much. I skate programs like that a lot at home, and just knowing I have the ability to do it, because I have done it so much, it allowed me to put a performance out when it counted.”

However, Sadovsky’s performance, combined with a winning skate from Japan’s Yuma Kagiyama, left work to do for Canada to earn a medal.

Heading into the final pairs, ice dance and women’s skates on Monday in Beijing, the Russians lead with 45 points, followed by the US at 42 and Japan holding down third at 39. Canada, at 30 points, and China with 29 are well behind .

Competitors are ranked by their performance, with the best score receiving 10 points, the second-best nine points, and so on. The team that finishes with the most combined points in all events wins gold.

After placing eighth in the short on late notice after Keegan Messing was unable to travel to China, Sadovsky, of Vaughan, Ont., scored just 122.60 in the free, more than 30 points back of fourth-place Jin Boyang of China.

Roman Sadovsky of Vaughan, Ont., finished in last place in the men’s free program portion of the team event at Beijing 2022 7:34

Sadovsky put a hand down on his opening quadruple Salchow and his program to Snow Patrol’s Chasing Cars unravelled from there. He popped an Axel and a Lutz and also had a fluke fall.

Read Also:  Why is Alchemy Pay (ACH) crypto on the rise today?

“Really shaky,” Sadovsky said. “I was fighting for every element. I guess I just didn’t feel comfortable. Definitely not the outcome I hoped for. It’s been a long year of training, I’ve had some good skates, some not so good skates, but this one is definitely closer to not so good.

“But hoping that I can use this opportunity to find that comfort in the singles event.”

Messing, the national champion, had yet to make it to Beijing as he awaited the results of his required negative COVID tests. But he has since passed his requirements and is expected to arrive in China Monday morning.

The ice dance pairing of Piper Gilles and Paul Poirier placed fourth in the rhythm dance event. The duo of Michael Marinaro and Kirsten Moore-Towers added a fifth-place finish in the pairs short program, setting up the pressure-filled skate for Schizas.

The Canadian national champion, who is the country’s lone entry in the women’s competition, delivered yet again.

Her 13th-place overall finish at the 2021 world championships in Sweden earned Canada a berth into the Olympics.

All competitions will be streamed live on CBC Gem, the CBC Sports app and CBC Sports’ Beijing 2022 website.