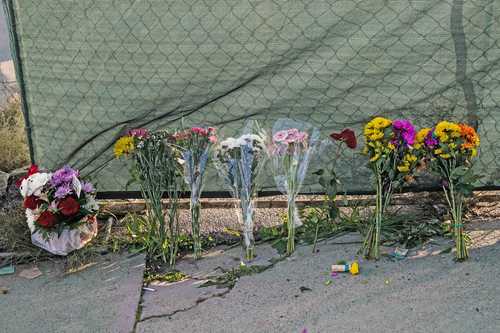 Officials said yesterday that Monterey Park. A man killed 10 people at a dance studio amid Lunar New Year festivities and then apparently made an unsuccessful attempt to enter another ballroom.

After several hours of searching, police surrounded and entered a white van, but it was unknown whether the suspect was inside.

The shooting and manhunt sparked panic in Asian-American communities in the Los Angeles area and overshadowed Lunar New Year celebrations across the country. Security has been tightened in other cities as well during the celebrations.

Los Angeles County Police Chief Robert Luna said five women and five men were killed and 10 others were injured in the shooting at the Starr Ballroom dance studio in Monterey Park. About 20 to 30 minutes later, a gun-wielding man entered the Lai Lai Ballroom in the nearby city of Alhambra.

Authorities believe the two cases are related, though they did not provide details about a motive.

In both cases the suspect was described as an Asian male. Luna said that upon entering the Alhambra room with a gun, the men there managed to disarm him.

Around noon, police officers in tactical vehicles and bomb squad vans surrounded a white van in a parking lot 22 miles from the Alhambra in Torrance, another major Asian community.

Luna said hours earlier that officers were searching for a white van after witnesses saw the suspect fleeing the Alhambra in such a vehicle.

In response to a question, Luna reveals that the person hiding in the van may be dead.

The police chief declined to say what type of weapon was recovered in the Alhambra.

This is the fifth mass murder in the country this month. It is also the deadliest attack since May 24, when 21 people were killed at an elementary school in Uvalde, Texas.

Monterey Park is a city located on the eastern edge of Los Angeles with a population of approximately 60,000 and composed mostly of first-generation Asian immigrants from China or Asian Americans.

The shooting took place in the centre, where the streets were decorated with red lanterns for the Lunar New Year festivities. “Happy Year of the Rabbit!”

The Monterey Park festival is one of the largest in California and attracted thousands of people throughout the day.

Two days of festivities were planned, which in previous years have been attended by over 100,000 people. But officials canceled Sunday’s event after the shootings.

At press time it was reported that the sheriff Los Angeles County, Robert Luna, announced that investigators have confirmed that the man found dead inside a white van after a confrontation with police in Torrance is a multiple-murder suspect.

Luna said officers found the man dead from a self-inflicted gunshot wound. sheriff, The suspect has been identified as 72-year-old Huế Canh Tran.

US President Joe Biden ordered that flags in the country’s public buildings be flown at medium level until the 26th in honor of the victims.