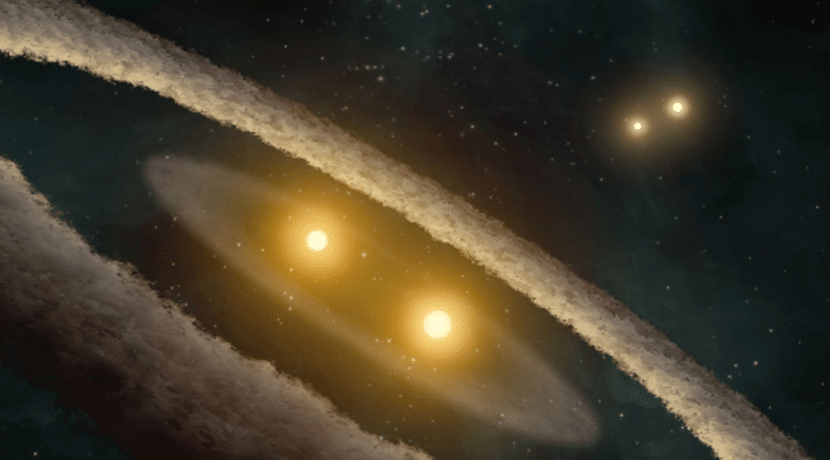 Copenhagen, Denmark). There are many binary systems in the universe, that is, star systems with two stars. According to NASA estimates, triple systems are also not uncommon. About ten percent of all systems should have three stars. Now scientists from the University of Copenhagen have discovered the first compact triple system.

According to their publication in the Monthly Notices of the Royal Astronomical Society, the star system TIC 470710327 differs from other star systems in how close the three stars are to each other. Furthermore, the mass of the stars of TIC 470710327 is significantly greater than that of the previously discovered triple system.

12 times the mass of our Sun

At the center of the system, two stars orbit each other. Their total mass is about 12 times the mass of our Sun. It takes about 24 hours for the stars to revolve around each other.

The third star of TIC 470710327 is in outer orbit. It orbits two stars at the center of the system and is about 16 solar masses. It orbits the two inner stars in about 52 days. According to astronomers, in relation to the size of the stars, it is relatively fast. The orbits of the outer star are elliptical, while the two stars in the center have circular orbits.

As astronomers point out, the properties of the star system TIC 470710327 are very unusual. According to the authors, this is probably because TIC 470710327 was originally a quadruple system, with two stars orbited by two stars in the center. Then the two outer stars could merge into one big star.

Alternatively, the properties of TIC 470710327 can also be explained by the fact that the outer star formed earlier. It may have ejected material that gave rise to the two smaller stars within. However, this scenario is considered very unlikely.

Read Also:  The James Webb Space Telescope is like a cosmic time machine. this is why

A third possibility explaining the properties of TIC 470710327 is that the two stars in the center and the third outer star formed independently. During their wanderings through the universe, gravity could have caused them to combine into a triple system. However, this explanation is also considered unlikely, as such a system would have the larger star more in the center.

Using computer simulations, the researchers examined three possible scenarios. According to the results, it is most likely that TIC 470710327 originated from a 2+2 star system.

Classification as a Binary System

The compact triple system 470710327 was discovered simply because a group of amateur astronomers analyzed public data from NASA’s TESS space telescope. The system was previously classified as a binary system because of the luminosity of the massive stars.

Because amateur astronomers found an anomaly in the data, professional astronomers re-analyzed the star system and were able to confirm that it was a compact triple system.

No major irregularities in voting on election day amid year-long investigation, false claims

Your Money: The Five Worst Reasons to Retire