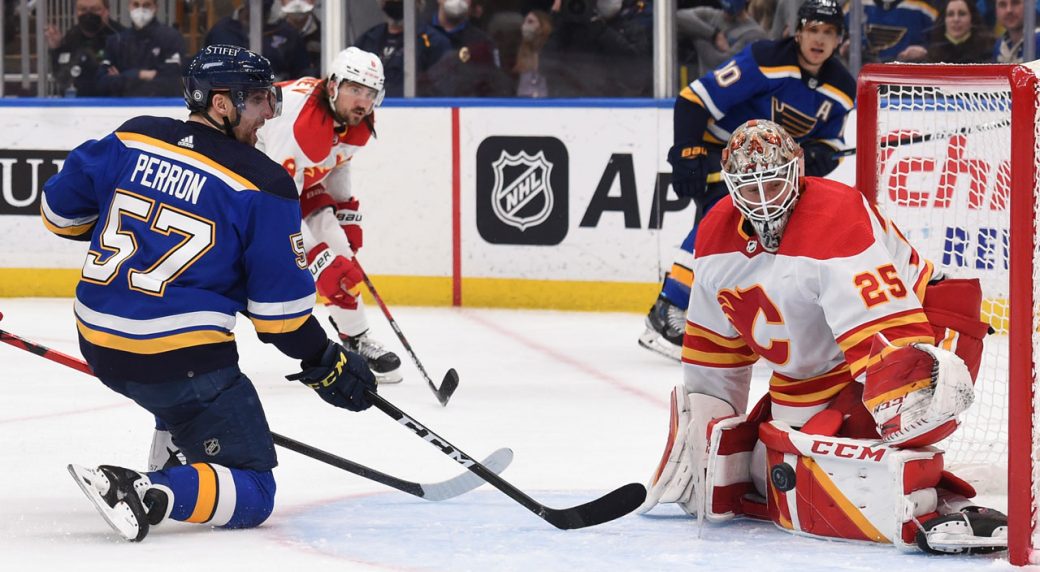 Given the beating they administered to the St. Louis Blues three nights earlier, the Calgary Flames had to know they were in for a big test Thursday.

They failed, according to Matthew Tkachuk.

“We’ve got to realize coming in here, that even though we just beat them a couple days ago, and beat Columbus, we’ve got to stay pretty even-keel,” said Tkachuk following a 5-1 loss in his hometown of St. Louis that served as a measure of payback for the 7-1 loss suffered in Calgary Monday.

“I think the problem with us is we get too high and get too low, so finding that consistency is something we’ve got to work on.”

It’s an age-old problem with his club.

“I think we have gotten a lot better at that, but I think maybe you look at a team like St. Louis that has won and the way they approached this game, and gave us nothing, and weren’t happy with the way they played last game,” added Tkachuk.

“But they came in and had a few days to think about it. We knew they were going to come out better, so I know we played last night but we have to be more desperate than what we came into today’s game.”

Tkachuk and his top line were as guilty as anyone for not executing, with his trio being held off the scoresheet for the first time in seven outings.

Such a development was inevitable for a team that has relied so heavily on Tkachuk, Johnny Gaudreau and Elias Lindholm all season long to carry the offence.

It was also only a matter of time that for the first time in four outings the Flames would direct fewer than 47 shots on the opposition’s goal.

To be fair, this time it was the visiting Flames coming off their third game in four nights, which does well to explain how the Blues were able to put an end to six-game point streaks for Gaudreau and Tkachuk, who combined for nine points in their previous meeting with St. Louis.

One night after setting a franchise record with 62 shots on goal against Columbus, the Flames only sent 29 pucks Ville Husso’s way. Only three came from the top trio.

Without secondary scoring, this is what happens to the Flames.

“I think there’s a little bit of fatigue the other night, similar to the game we just played them in Calgary,” said coach Darryl Sutter.

“We had chances on the power play, didn’t score, missed the net, made individual mistakes from veteran players that cost us goals against. It’s not just about scoring goals. That’s a veteran, good hockey team. They had a one-off in Calgary, but if you look at their record they’re on pace for 110, 115 points. If you make mistakes you’re going to get put in a cell.”

Amongst others, it was a tough night for Sean Monahan, who played a role in both of the Blues’ first period goals, handing the hosts a 2-1 intermission lead the Flames couldn’t climb out of despite outshooting the hosts 29-28 .

Asked what went into his decision to start Jacob Markstrom on consecutive nights, Sutter was curt.

“He hasn’t had much work, we didn’t play for a month, we get four days off in a few days, the other guy hasn’t won for a month,” he said.

“It wasn’t even a hard decision, it was one we made a long time ago.”

With his former club from Vancouver visiting Saturday, will we see Markstrom make four starts in six nights?

One would assume so, as he has clearly rebounded into form, allowing one goal over his two previous starts.

Backup Dan Vladar has lost his last three starts in a row and has watched from the bench the last six games, dating back to Jan. 7.

BACKS TO THE BASICS

The Flames lone goal scorer was Mikael Backlund, who snapped an 18-game goalless drought Wednesday in Columbus where he scored the eventual game winner.

By far the Flames’ most effective player all night long on Thursday, Backlund tied the game 1-1 midway through the first period when he took an Andrew Mangiapane pass at the side of the net and fired it past Ville Husso from a sharp angle.

His sixth of the season gave the veteran center goals in consecutive games and points in his last three.

The fact that he’s fired 22 shots on goal in that span demonstrates to him and his coach that he’s starting to find his game.

Backlund had a golden chance to cut into the Blues’ 3-1 lead with seven minutes left in the second period when he had a shorthanded breakaway on which he lost the handle after attempting a deke to his backhand.

He later hit the post while killing another penalty in the dying minutes of the game.

Asked about his second line center earlier in the day, Sutter didn’t sugarcoat the fact that he needs more from Backlund as part of the team’s ongoing struggle to find secondary scoring.

“Well, he has to be better,” said the coach.

“We can’t have guys playing 15-18 minutes with three or four goals, especially at that position. We’ve talked a lot about it. I’m not going to beat around about it. He’s a good player and he has to produce.”

The ship’s owner said that he had spent 50 hours without sleep before the accident. NWN News

Diplomats meet in Moscow and Berlin as Russian drills held