Florida: A strange snake has been captured in pictures swallowing its prey 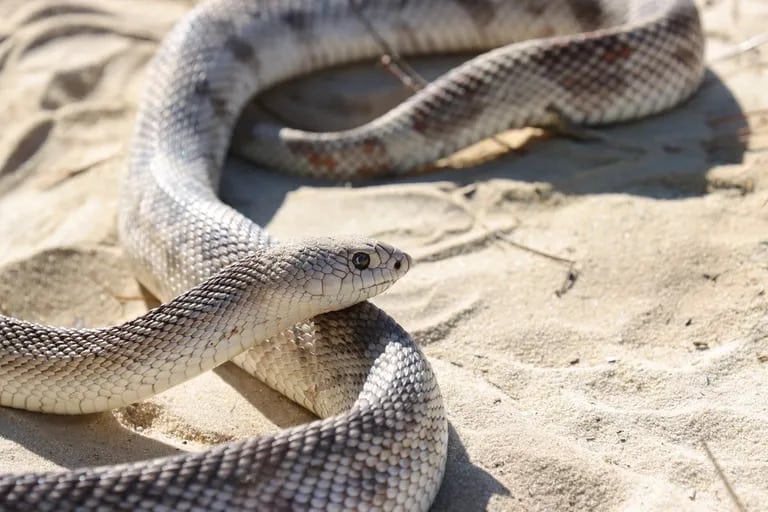 One of those scenes, which can only be seen in documentaries, was witnessed by a group of biologists In the iconic Ocala National Forest in Florida.

araks ohanian is a biologist with the Florida Fish and Wildlife Conservation Commission (FWC) and was surveying the area when she was surprised to see an animal she hadn’t previously recognized, The sample was at a road intersection and he made contact with other colleagues to identify it.

when they got closer they found it It was the Florida pine snake, which is considered rare but not venomous. What was impressive was that they found it swallowing its prey, a cottontail rabbit. “After the snake finished its meal, it disappeared into the vegetation”Reported to FWC.

However, the snake returned attracted by a biologist’s camera, Thanks to this, they were able to publish very good quality images with a reptile in the foreground.

The FWC provided information with photos that add to biologists’ finding that it is a threatened species in Florida: “It is a powerful deterrent and feeds on mammals, land birds, and bird eggs.” Their favorite prey is the pocket gopher, which they stalk in the sand dunes that cover the dens.

is about One of the largest snakes in eastern North America, Because they can measure more than 2 meters. Being a strange sight, the commission asks that those who find them en route inform the experts through a form available online.

Rare species the FWC is targeting include the Florida pine snake. the eastern indigo snake, the short-tailed kingsnake, the kingsnake, in all its species, and the western hognose snake. The agency recommends attaching a photograph when reporting a sighting.

The Facebook post sparked curiosity among followers and residents of surrounding areas and the biologist araks ohanian He took the time to explain that, although they look like different snakes in the series of photos taken, it’s all the same in captivity: “I was surprised how small the lump was after the snake ate. I think they really compress their prey when they swallow.”

To the biologists’ surprise, in the comments section, neighbors added sighting experiences: “We had a big one in the woods near Mount Dora. I stepped on it for about a day. Our gardener lived in terror as, although it is not venomous, it presents itself as a python.

The publication thanked thousands of responses, anecdotes and contributions to public knowledge: “Thank you for sharing these creatures that are often misunderstood. Living here in Florida has taught me a lot about our good neighbors.” Is. Non-venomous snakes are welcome in our garden,