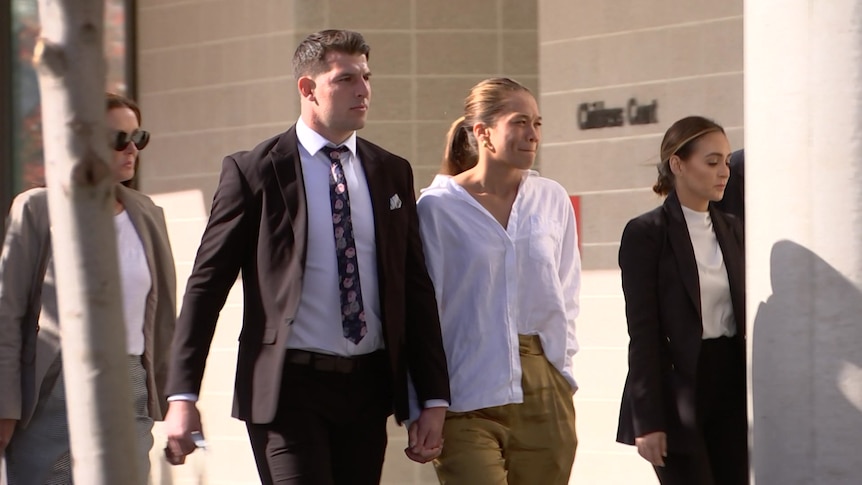 Former Raiders player Curtis Scott has walked free from a Canberra court, cleared of an assault charge, after he punched a man at a city nightclub last year.

When footage of the punch emerged, the Raiders sacked Mr Scott, and he was later charged by police.

However, on Monday, Mr Scott was cleared of assault charges on the grounds of self-defence.

Former Raider says victim made sexual advance towards him

Mr Scott told the court he had been out at the nightclub Kokomo’s, looking for some Raiders friends and was stopped by a fan, when he was approached by a man who said he admired his tattoos.

He said the man then reached to look down the back of his shirt making him extremely uncomfortable, before making a sexual advance.

“He said something along the lines of he’d like to have a gay experience with me,” Mr Scott told the court.

A security guard moved the man to the other side of the table, but he doubled back, advancing towards Mr Scott.

“I thought they were going to attack me,” Mr Scott told the court.

“That’s when I threw a left-hand punch.”

The man who was hit denied making the mark.

“I’ve never said those words before in my life,” he told the court.

However, the man admitted he may have touched Mr Scott.

“I maybe placed a hand on his left shoulder,” he said.

The security guard said Mr Scott had not been too drunk but he thought the victim was intoxicated.

,[The man] was getting to that sloppy stage, where it was nearly time to say: ‘Time to go home’,” he said.

Mr Scott told the court was diagnosed with post-traumatic stress disorder after an incident on Australia Day 2020, when he was tasered and pepper-sprayed by police in a Sydney park.

He said he had felt fear come over him again when he saw the man coming toward him.

Prosecutor Katie McCann queried his account, asking why he had stayed at the table.

“I thought if I turned my back and walked away I could be attacked from behind,” he said.

Ms McCann told the court the response was over the top.

“This comes down to a lashing out at this complainant, rather than responding to a threat,” she said.

However, Mr Scott’s lawyer, Sam Macedone, told the court his client’s reaction was driven by his heightened perception of threat, and he was acting in self-defense.

Magistrate James Lawton agreed, but noted that Mr Scott had not always responded appropriately in court.

“Perhaps he was a bit of a smart alec in some of his answers to the prosecutor,” the magistrate said.

Mr Scott is now working as a courier and is yet to find a place in another rugby league team.

Read Also:  Freedom on offer for vaccinated Australians in locked down state