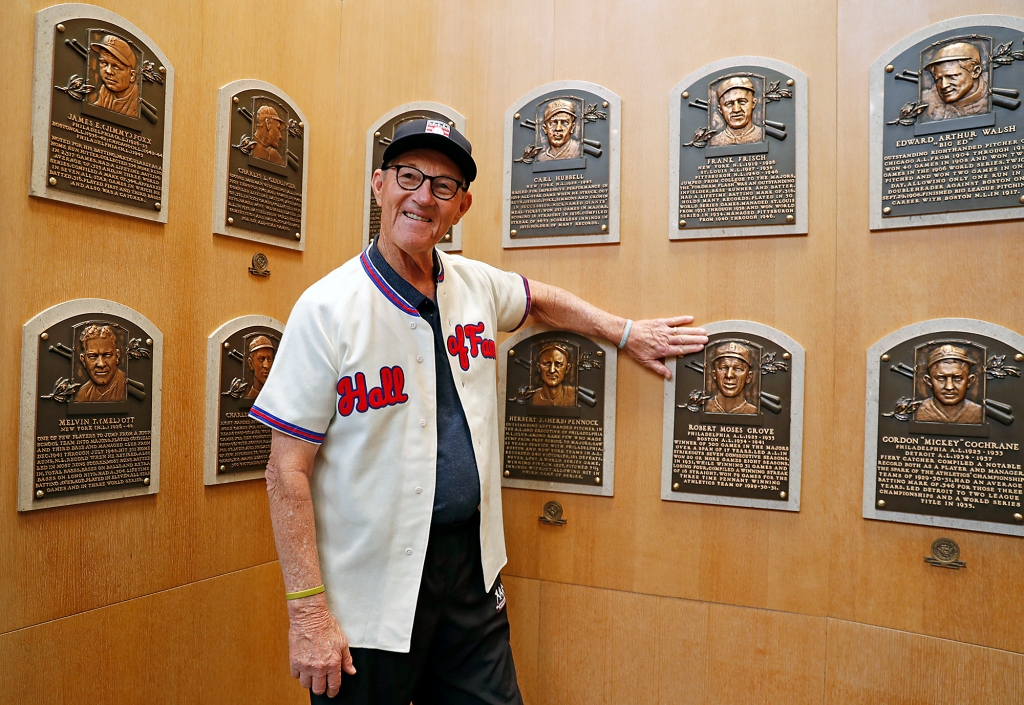 Cooperstone, NY – Located on the southern shore of Otsego Lake, between the Catskills and the Adirondacks, a few miles from grazing cows and open farmland, the quaint village of Cooperstown. Here, it’s impossible to walk a few feet down Main Street without stumbling upon a reference to baseball. Even stores that have nothing to do with baseball, such as Grand Slam Guitars and Cooperstown Cigar Company, have references to the sport in their branding.

Cooperstown may not have been the birthplace of the sport as it was once claimed, although it hardly matters much now. Whether it claims that distinction or not, the city has become synonymous with baseball greatness.

Hard to get to – literally – from the Twin Cities. The quickest journey involves two flights and a drive from Albany or a flight to New York City with a four-hour drive.

It is even more difficult to achieve figuratively.

Only four players have been inducted into the National Baseball Hall of Fame as twins. On July 24, when Jim Catt and Tony Oliva are installed, they will join a group that includes Harmon Kilbrew, Rod Carew, Kirby Puckett and Burt Blyeven.

It’s a day the 83-year-old Kat thought would never come. But after spending a lifetime with other Hall of Famers, Kat will soon be one of them, joining the best club in the game in Cooperstown. He and Oliva will be inducted into the hall on July 24.

When asked how his life has changed since the call came in early December, The Cut joked that he has signed his name nearly 3,000 times.

“There are different levels of the Hall of Fame, and I’ve never been naive enough to put myself in class with Sandy (Coufax) and (Bob Gibson) and (Tom) Seaver and (Juan) Marichal, but I’m honored I’m feeling here to stay as representative of I think longevity and maybe dependability, accountability, and I’m happy about that,” Katt said.

The first glimpse of Katt’s greatness came on June 26, 1946, the day his father, John, took him to a Tigers/Red Sox doubleheader at Briggs Stadium – later Tiger Stadium – in Detroit.

Remarkably, he saw four future Hall of Famers that day – Tigers pitcher Hal Newhauser and first baseman Hank Greenberg along with Red Sox second baseman Bobby Doerr and left fielder Ted Williams, one of the best to ever play the game. were.

“I think my little 7-year-old’s brain said, ‘I want to be one of those people,'” Kat recalled.

Years later, Kat would face a fresh-faced rookie pitching in his third career game, facing Williams, who by that time was near the end of his career. He squared twice in a game in September 1959 – the first year of the cut – with the veteran collecting a single and a double from a lefty starter.

The next year, Kat got to fly the Teddy ballgame to face him once. Over the ensuing years, the two developed a friendship, and in 1995, Kat spoke at the dedication of the Ted Williams Tunnel in Boston.

“He was one of those people that if I would say, ‘Mr. Williams,’ (he would say, ‘Don’t Mr. Williams me. I know who you are. The left-hander has this curveball,'” cut Said. “He really made you feel comfortable being around him.”

Williams, of course, was one of three players Kat said he felt awkward against the rubber.

the other two? Yogi Berra and Mickey Mantle.

About facing Mantle, Kat said, “It was pretty intimidating.”

Read Also:  Source: Kyle Seeger was told that Assistant GM . Mariners will not exercise their 2022 option in the email of

“Before cable TV, all we knew about players or all we saw was trading cards and so we just marveled, like every pitch has to be perfect or he’s going to kick it out of the ballpark,” says Katt. he said. “It took a while to realize that the human part of it, that they would get out just like the rest of the hitters, but facing Mickey was always a special experience.”

Katt doesn’t know for a fact this fact, but it wouldn’t surprise him if, over the course of his career, he faced more Hall of Famers than any other pitcher. It is the result of a 25-year playing career that spanned four different decades – Katt started in 1959 and retired in 1983.

He faced 62 of them, including the postseason – and the pitchers who stepped against him. And that number doesn’t include Roberto Clemente and Willie Mays, both of whom he faced in the 1966 All-Star Game.

He had to face Brooks Robinson more often than not, who had 153 plate appearances against him. No one has put him more fit than Al Kaline, who scored 10 runs from him; “He really didn’t have any weaknesses where you could fool him,” Katt said. He did his best against Reggie Jackson, whom he dismissed 27 times in 77 plate appearances. He attributed that success to being in his prime while Jackson was still a young, developing hitter.

The list of Hall of Famers he has crossed over – in one form or another – is long and impressive.

After leaving Minnesota—he pitched for the Twins from the start of his career until the end of the 1973 season—he faced his former teammates Carew, Oliva, Killebrough, and Belivene.

“I saw him make his debut and I could tell you that had he played about three innings, he was going to be a star,” Cutt said of Bleewen. “He looked just like he was.”

Years later, it would be Beliven who would help the Cats cement their place in baseball history, helping them get to where they were.

In the days leading up to the Golden Days Era committee vote, Katt was telling those around him that they would be more surprised if he didn’t.

After all, he had gone through this process several times. He left the Baseball Writers Association of America ballot 15 years after the vote for the 2003 class and then missed out on being selected by a small committee for the next five times he appeared on the ballot. Last time in 2015, he got 10 votes out of the required 12 votes.

In fact, he said, he expected more than anything that two of his former teammates, Oliva and Dick Allen, each of whom received 11 votes last time, would get the vote. Oliva did, of course. And Alan will be down one vote again.

This will not be an anxious or stressful time for him. No matter what happened on Sunday, he will hit the golf course on Monday, as usual, he said a few days before the vote.

“I think the Hall of Fame awards dominance over sustainability and so from a baseball perspective, I’m at peace about that,” Katt said days before the vote. “I understand why but as far as the buildup is concerned, the curiosity is gone. I am still cynical about it.”

The credibility of the kat depended to a large extent on his durability. He finished his career with 283 wins, 31st on the all-time list, but less than the 300 that many consider a lock for the Hall of Fame. Three hundred – and 283 for that matter – is now a number that no one is likely to ever reach again. Only two current pitchers, Justin Verlander and Jack Greinke, have also scored 200 wins.

Kat ended his career with an average of 3.45 runs and 2,461 strikeouts, his 44th ever. He won the 1982 World Series ring with the St. Louis Cardinals—and lost narrowly on the second, duel three times in the 1965 World Series with Coffax and the Los Angeles Dodgers, which went on for a full seven games.

He is tied for the second time with 16 Gold Glove Awards, and his name continues to dominate the Twins’ record books to this day – the all-time leader of the Cat Club in wins, games starts and innings starts. He is second in strikeouts, completed games and shutouts, and in July he will become the ninth Twins player whose number will be retired by the club.

But for all the praise, he still didn’t think he was getting the call.

“I keep it in my rearview mirror because I always thought pitchers were the perennial No. 1 pitchers in the Hall of Fame,” he said. “Opening day starts, perennial All-Stars, and I would never have fit that profile.”

When her phone rang on December 5th and she was Jane Forbes Clark, chairman of the National Hall of Fame Board of Directors, second in line, her life was changed forever. It’s only bad news when Clarke doesn’t call. In the years since she went missing, Kat knew this.

The phone call could mean only one thing: The cut had received the required 75 percent of the vote from the Golden Days Era committee. The voting block consisted of Hall of Famers, including some of his former teammates – Ozzy Smith, Schmidt and Beliven – major league executives and veteran media members and historians.

“I’m sure there are some negative people out there now who will say ‘Well, you know, he wasn’t in the category of those leading pitchers,'” Katt said. “But, you know, I’m happy with the (Golden Days Era) committee that they were people I played against, I played, writers who were there when I played, officials like John Schuerholz who felt I belonged. I am very grateful for that.”

On Tuesday, Katt signed the backer for his future plaque after a private tour of the museum, slipped on the Hall of Fame jersey for the first time and was welcomed into “probably the best team” by Clark.

The day, he said, was humbling.

Within a few months, Baseball Lifer — following his playing career, Katt briefly coaching and then embarking on an award-winning broadcast career that continues to this day — would take his rightful place in this baseball-crazed town, his The legacy was forever cemented as one of the sport’s greatest men, with so many with whom he played, against and befriended over the years.

At 83, the little boy who once wanted to “be one of those guys” will now be forever linked to the greatest.

Column: Jon Gruden: Just the NFL’s latest ‘distraction’ from its racism and misogyny