found it! world with 3 suns at once 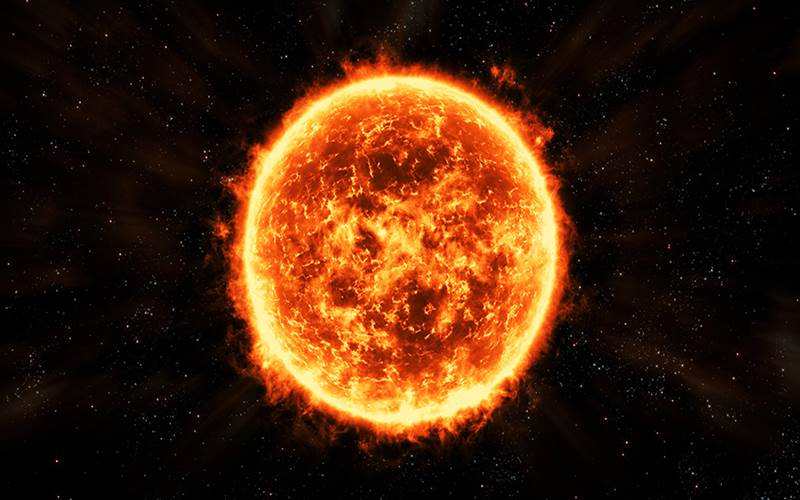 JAKARTA – Scientists have discovered a world in the constellation TW Hydra that has three Suns at once.

That spot is located about 150 light years away.

According to researchers at the Niels Bohr Institute at the University of Copenhagen, they discovered a system in this world with two binary stars orbiting each other, which they call HD 98800 and a larger star orbiting both.

“As far as we know, this is the first of its kind ever detected. We know of several tertiary star systems, but they are usually much less massive. These massive stars in triplets are very close together – it’s a compact system,” Alejandro Vigna-Gómez, a postdoc at the Niels Bohr International Academy and author of the related study, told Times Now News.

The researchers were amazed by the existence of a third star in this system, weighing 16 times the mass of our Sun, with an inner circle orbiting the two stars six times each year.

This system, due to its high brightness, was first discovered by a community of amateur astronomers who took data from NASA’s Transiting Exoplanet Survey Satellite Observatory. At first, they thought it was an anomaly and careful professional astronomers later confirmed that it was a unique triple star system.

Read Also:  love diamonds? Diamonds rain down on Uranus and Neptune! Can we catch them? trace

Alejandro collaborated with his research colleague Bin Liu from China to find an answer to the question of how this unique combination of binary stars and massive rotating stars formed.

The two researchers then coded the data and ran it 100,000 iterations on the supercomputer to assess the most likely outcome of this scenario.

The two researchers are currently using telescopes and observatories around the world to observe this unique system.

Earlier, NASA had also discovered an exoplanet with three stars, with a strange orbit that stunned astronomers.

The planet, known as KOI-5Ab, was discovered in 2009 by NASA’s Kepler Space Telescope, but was “discarded” by scientists because the space telescope was an easy candidate to identify.

“KOI-5Ab was discarded because it is complex, and we have thousands of candidates,” David Ciardi, chief scientist at NASA’s Exoplanet Science Institute, said in a statement. “There are easier choices than KOI-5Ab, and we learn something new from Kepler every day, so KOI-5 is largely forgotten.” He was quoted by the Guardian as saying.

KOI-5Ab is about 1,800 light-years away from Earth. A light year, which measures distance in space, is about 6 trillion miles.

However, thanks to NASA’s Transiting Exoplanet Survey Satellite (TESS) and other Earth-based telescopes, KOA-5ab has been given new life, with researchers finding its orbit enigmatic.

Read Also:  Two stars that were born in the same stellar nursery but seem to find each other at opposite ends. But there were no angels singing or destiny

Because of its size, KOA-5ab is likely to be a gas giant similar to Jupiter or Saturn, but it orbits the star in its star system, KOA-5a, every five days. It is out of tune with at least one of the other two stars, and possibly both.

“We don’t know of many planets in a three-star system, and this is special because its orbits are inclined,” Ciardi said. “We still have many questions about how and when planets can form in multiple star systems and how their properties compare to that of planets in single star systems. By studying this system in more detail, perhaps we can learn more about it.” can do

In contrast, KOI-5A orbits KOI-5B once every 30 years. KOI-5C orbits once every 400 years, leaving the four celestial bodies in tilted orbits as a result of different planes.

The NASA statement said it was not clear what caused the tilted orbit, although they believe another star gravitationally kicked the planet during its evolution, deflecting its orbit and moved it inwards. It is believed that three star systems make up about 10% of all star systems.

The findings were presented recently at a virtual meeting of the American Astronomical Society.

Quarterback Tanner Morgan will return to the Gophers next season