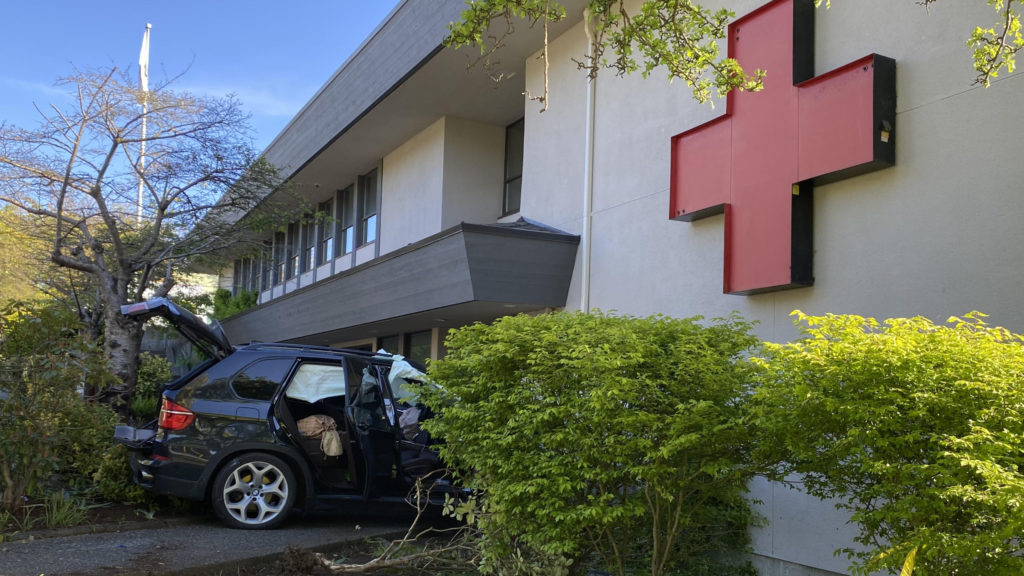 Victoria police say four people were hospitalized when a vehicle crashed into a building near downtown Victoria Tuesday afternoon.

The crash occurred at the Red Cross building near the intersection of Quadra Street at Fairfield Road at around 4:30 pm, police said.

Roads surrounding the crash were closed and traffic was expected to be “significantly disrupted” by the incident.

VicPD initially said five people were injured in the crash, but later confirmed only four had been sent to hospital.

A man who says his car was struck by the vehicle that went into the building told CHEK News he was heading down Quadra Street toward Fairfield Road with his wife and kids when it happened.

He said a black SUV rear-ended his sedan, pushing it into a Smart car at a red light.

The Smart car was then pushed into the intersection while the sedan was spun around 180 degrees. The driver said the SUV continued traveling along the road and finally came to a stop when it hit the Red Cross building.

The driver, who did not want to be identified, said it looked like two pedestrians may have been struck by the SUV.

There is no information yet on the condition of the injured people and drivers were being asked to avoid the area.

Officers are responding to a collision btwn a vehicle & building at Quadra & Fairfield. Roads will be closed & #yyjtraffic significantly disrupted in the area. Early info indicates 5 persons injured. More info to come. Please avoid the area. #yyj

PFAS in food packaging: Get ready for the new rules