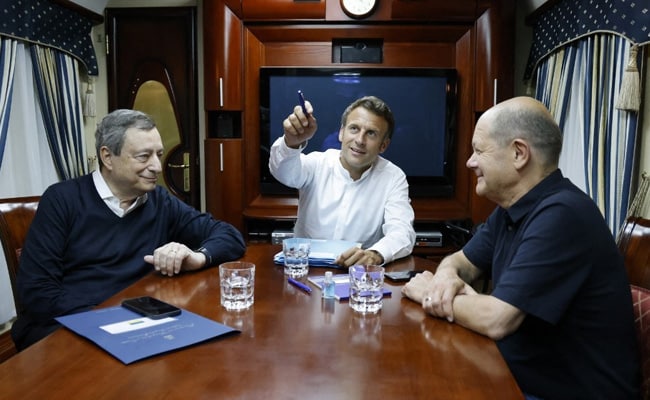 The three leaders left for Poland by train in the morning.

The leaders of France, Germany and Italy were on a train to Kyiv on Thursday, a day after the United States announced $1 billion worth of new weapons for beleaguered Ukrainian forces.

Kyiv soldiers are resisting a fierce attack in the Donbass region by Russian President Vladimir Putin’s forces, which are pushing to seize a region of eastern and southern Ukraine.

According to an AFP video, the three leaders left Poland by train in the morning.

Speaking during a visit to neighboring Romania on Wednesday, Macron said “we, the European Union, need to send a clear political signal to Ukraine and the Ukrainian people, who have been protesting heroically for several months”.

It is the first time that leaders of three European Union countries have visited Kyiv since Russia’s February 24 invasion of Ukraine.

He is due to meet Ukrainian President Volodymyr Zelensky at a time when Kyiv is pushing for EU membership.

Draghi has backed Ukraine’s hopes of joining the bloc, and made the case for expanding the European Union eastward when addressing the European Parliament in Strasbourg last month.

The European Commission has said it will soon make recommendations on Kyiv’s membership prospects. France holds the rotating presidency of the European Union until the end of this month.

Other prominent figures who have visited Ukraine since the start of the war include British Prime Minister Boris Johnson, US Secretary of State Antony Blinken and UN Chief Antonio Guterres.

Biden said he told Zelensky in a phone call on Wednesday that “the United States will stand by Ukraine as it defends its democracy and supports its sovereignty and territorial integrity in the face of unprovoked Russian aggression.”

“The bravery, resilience and determination of the Ukrainian people inspire the world.”

Fighting in eastern Ukraine is centered on the industrial city of Severodnetsk, and the Russians appear closer to consolidating control after weeks of intense fighting.

According to the US Institute of War, Moscow’s forces have destroyed three bridges spanning a river between the city and Lisichansk, “likely to isolate the remaining Ukrainian defenders from vital lines of communication within the city”.

According to Ukrainian officials, hundreds of civilians are trapped at a Severodnetsk chemical plant, which is being bombed continuously.

Russia said on Wednesday it had sought to establish a humanitarian corridor to evacuate them, but Ukrainian forces called the operation a “deplorable failure” and prevented it from proceeding.

From a high altitude in Lysychansk, an AFP team saw black smoke rising from a chemical factory in the city of Severodonetsk and another area.

The Ukrainian army was using the high ground across the river to exchange fire with the Russian army.

In Brussels, Ukraine’s Defense Minister Oleksey Reznikov and other officials met with some 50 countries of the Ukraine Defense Liaison Group at NATO headquarters on Wednesday and called for an increase in arms and ammunition.

NATO chief Jens Stoltenberg told reporters: “Ukraine is indeed in a very serious situation and, therefore, there is an urgent need to act.”

Top US defense officials defended the speed of weapons delivery, insisting that Kyiv required a few weeks of training before entering the war.

“We’re really focused on what the leadership believes are their current needs in this fight,” US Defense Secretary Lloyd Austin said.

“And I think the international community has done a great job of providing that potential. But it’s never enough.”

Meanwhile, Putin insisted he was not as isolated internationally as his foe wanted with a call on China’s leader Xi Jinping, his second since Russia invaded Ukraine. Reported call.

China has refused to condemn Moscow’s invasion of Ukraine and has been accused of providing diplomatic cover for Russia by criticizing Western sanctions and arms sales to Kyiv.

The United Nations has warned a hunger crisis worsened by the war in Ukraine, traditionally a bread basket for the world, could lead to already record global displacement numbers.

Diplomat: HIMARS the key to the destruction of Russian troops, Ukraine’s success

Threat to Russia, Ukraine is supplied with 160 US laser-guided Hellfire missiles

Ukraine should be careful, this missile system of North Korea may be the rival of HIMARS

Russia defends after cutting gas to Europe and warns: “Winter is ahead, the situation will get worse”

Revealed, for 6 months America has sent 806,000 artillery shells to Ukraine

Dramatic, Ukrainian and Russian fighter jets duel in the air over Donbasi