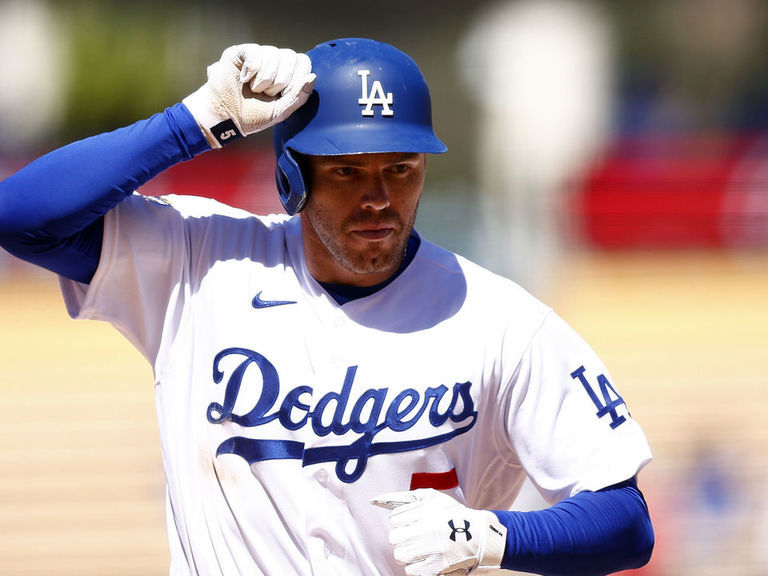 LOS ANGELES ( Associated Press) — The Los Angeles Dodgers have gotten to the point in their latest stretch where a five-run deficit and the early exit of a 20-game winner don’t even seem like particularly daunting obstacles.

“They weren’t going to deny us today,” manager Dave Roberts said. “I had a feeling we were going to come out victorious.”

In fact, the Dodgers did it again on Sunday, just as they did nearly every day of their stellar stay at home.

Freddie Freeman went 4-for-5 with a home run and two RBIs, and the best team in the National League rallied from a pair of big early deficits for its seventh straight victory, 11-9 over the Chicago Cubs.

Trea Turner and Will Smith also drove in two runs apiece as Los Angeles went 10-1 at home for the first time since 1980 despite trailing 5-0 in the first inning and 8-3 in the third. Gavin Lux reached base four times as Los Angeles rallied early and finally held on to win its last home game before hosting Dodger Stadium’s first All-Star Game in 42 years.

With a seventh straight victory over the Cubs, the Dodgers swept their season series with Chicago for the first time in the history of the venerable NL franchises. Los Angeles beat the Cubs for the 10th straight time overall, matching the longest winning streak in this rivalry since 1947, and swept a four-game series with Chicago at Chavez Ravine for the first time since 1965.

“We just put together good at-bats, one after another,” Smith said. “We’re playing well right now.”

PJ Higgins hit his first career grand slam during Chicago’s five-run first inning, and David Bote hit a three-run homer in the third inning to put the Cubs ahead.

But Chicago’s bullpen again couldn’t contain Los Angeles’ powerful lineup, losing a lead for the third time in four games. Chicago went 2-5 on the road and fell to 0-7 at Dodger Stadium since throwing a combined no-hitter here last July 24.

“We continue to grow and pull some moments and assess where we could have been better,” manager David Ross said. “We had been playing really good baseball up until this series, and we had a chance to win several of these games. We had some good times, but bottom line, we have to win baseball games.”

Turner’s RBI single put the Dodgers up 9-8 after a six-run third inning in which Los Angeles sent 11 batters to the plate. The inning was extended when Cubs third baseman Patrick Wisdom missed a single to first on Mookie Betts’ two-out grounder, allowing them to score two runs.

Shortly after Freeman was left off the NL All-Star team, he hit his 11th home run of the season in the sixth off Anderson Espinoza. The five-time All-Star added an RBI single in the seventh for his third four-hit game since he joined the Dodgers this season.

Nelson Velazquez homered off $30 million left-hander David Price on the first pitch of the eighth for Chicago, but Brusdar Graterol escaped a two-and-no-out jam to end the inning. Graterol also pitched a perfect ninth for his third save.

Both starters finished early in a nearly four-hour game.

Julio Urías’ four-start winning streak ended when he only lasted two innings, and matched his record for runs allowed the previous season after Chicago’s first six batters. The former 20-game winner’s ERA went from 2.57 to 3.01 as he matched his shortest start of the season.

Drew Smyly allowed five hits and four runs over two innings for Chicago during his first start since May 30. He spent the last month on the disabled list with a right oblique strain.

Cubs: 2B Nick Madrigal felt tightness in his groin during his rehab appearance for Triple-A Iowa. … OF Jason Heyward (right knee swelling) did light baseball activities.

Dodgers: LHP Andrew Heaney will throw a simulated game Tuesday on the Los Angeles road trip before taking a four-inning rehab assignment. He has pitched only once since April 17 due to shoulder inflammation.

Cubs: After a day off, Adrian Sampson (0-0, 2.91 ERA) takes the mound Tuesday at Wrigley Field against Baltimore to open a six-game homestand.

Dodgers: After a day off, Mitch White (1-1, 3.38 ERA) takes the mound Tuesday in St. Louis for Game 1 against the Cardinals.