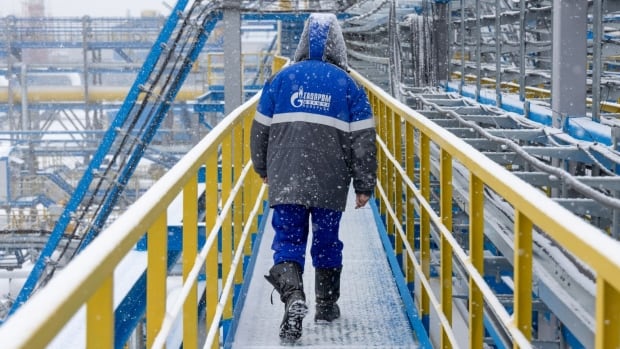 It may be a world away and pale in comparison to the human toll, Russia’s decision to invade Ukrainian territory this week will have many direct and indirect impacts on Canada’s economy.

The most obvious one is on the price of oil. Russia is an energy superpower, and the prospect of Russian exports of energy products like crude oil and natural gas being limited is weighing heavily on markets.

Short of military intervention, threatening to limit Russian energy exports would be the most powerful weapon that NATO has at its disposal to convince Putin to end his incursion into Ukraine, but because Europe is just as dependent on Russia for oil and gas as Russia is on the revenue from selling it, experts think there’s little chance of that happening.

“The White House has gone to great lengths to convey that it will not target the Russian energy sector and exacerbate an already tight supply situation,” commodity analyst Helima Croft with RBC Capital Markets said in a note to clients early Thursday.

“Though there have been no physical supply disruptions yet, there are serious concerns that Russia could move to restrict commodities exports in response to US sanctions.”

Russia currently pumps about 10 per cent of the world’s supply of crude oil every day.

Ordinarily, one energy giant turning off the taps would open the door to another opening them, but that’s unlikely to happen with Canada because pipeline and export capacity for oil and natural gas are already stretched to their limit, said Eric Nuttall, a partner and portfolio manager at Toronto-based investment firm Ninepoint.

“That’s an impossibility,” Nuttall said in an interview of the prospect of Canada boosting oil exports to take some leverage away from Putin.

Despite sizeable energy resources in Canada’s oilsands and US shale, Nuttall says the decision years ago to limit pipeline expansions have limited North America’s ability to export as much oil as possible, to the point where both Canada and the US still import oil from overseas.

According to the Canadian Association of Petroleum ProducersCanada imports roughly $550 million worth of crude oil a year from Russia, most of which is consumed in Eastern Canada.

And Nuttall says the US imports even more than that.

“They’re basically contributing $66 million a day into the Russian coffers to empower them to launch cruise missiles into Ukraine when they had a safe and reliable supplier to the north,” he said of the Biden administration’s decision to kill the Keystone XL pipeline once and for all.

Oil prices are headed higher in the short term because of the uncertainty, but a long term military conflict in the region would be a negative for oil prices over the long term because it would slow down the global economy, said Barry Schwartz, chief investment officer at Baskin Financial.

“No one should be giddy about oil,” he said in an interview. “It’s possible that oil prices continue to rise as world events continue to be uncertain, but ultimately if [the] The invasion continues, if it worsens, the economies around the world are going to slow dramatically and that is a terrible scenario for oil.”

WATCH | Why the prolonged conflict in Ukraine would bring down energy prices long term:

Barry Schwartz, chief investment officer at Baskin Wealth Management, says an escalation of the Russian invasion into Ukraine will slow economies around the world and potentially bring down the price of oil. (Photo Credit: John Woods/THE CANADIAN PRESS) 0:31

Energy may be the most direct impact, but global food markets will be affected, too. Often called the “breadbasket of Europe,” Ukraine is a major global supplier of crops like corn and wheat, and Russia is not far behind.

Combined, the two countries produce about 25 per cent of the world’s supply of wheat, and Croft at RBC says those supplies are now in doubt because of Russian aggression.

“Given the recent Russian Black Sea naval deployments, we think there is a considerable risk that Ukraine’s ports may be inoperable if active fighting commences,” Croft said.

As a major wheat exporter, Canada will feel that part of the conflict directly.

“If Europe is not able to get Ukrainian wheat, they’re going to be looking for some somewhere else,” said David Quist, executive director of the Western Canadian Wheat Growers Association, in an interview.

“If Ukraine, which is a major grower exporter, is not producing this year, there’s going to be a global shortage. And so that will cause prices to rise.”

WATCH | How conflict in Ukraine will impact wheat prices in Canada:

With Russia and Ukraine being major exporters of wheat, people can expect the price of wheat to go up and for buyers to shift their purchasing toward other markets, says the University of Saskatchewan’s agricultural economics professor Richard Gray. (Photo credit: Orlin Wagner/The Associated Press) 1:27

They already are. Wheat prices have risen by 15 per cent in the past month alone, on the assumption that two of the world’s biggest wheat crops may be unreliable in the short term at least, and potentially the long term, too.

“If it’s a prolonged war and there it’s disrupted, it could disrupt production for this spring or in coming years,” said Richard Gray, a professor of agricultural economics at the University of Saskatchewan.

Higher prices for wheat may be good news for farmers, but it means consumers in Canada and abroad should brace themselves for even higher food prices to come.

Gray says a loaf of bread may contain only about 40 or 50 cents worth of wheat, “so the impact won’t be very large directly, but indirectly you’re going to see some increase in cereal prices, some increase in other food products “

Higher food prices are one of the biggest factors that have been driving up inflation to multi-decade highs lately, a trend that central banks were on track to imminently tackle by raising their interest rates,

While rate hikes are still expected, the sudden outbreak of war in Ukraine has changed the plans a little, Royce Mendes with Desjardins says.

The Bank of Canada is set to announce its latest interest rate decision next Wednesday, and it is widely expected to raise its benchmark rate by at least a quarter of a per cent, to 0.5 per cent.

But the path forward is very much uncertain.

“Rock bottom interest rates seem inconsistent with elevated levels of inflation, so we expect the normalization process for interest rates to begin in the next few weeks and actually continue at least gradually throughout the year,” Mendes said in an interview.

“But there are certainly more question marks about that process than there were just a few days ago.”

While expectations of how many hikes are coming and how fast are lower today than they were just 24 hours ago, investors in both Canada and the US continue to expect about a half dozen rate hikes in Canada and the US by the end of the year, Trading in investments known as swaps suggest.

Not even the shocking prospect of a military conflict in Europe is likely to compel central bankers to deviate from their plans to rein in inflation, but the path forward is still anything but certain — so Canadian consumers should brace themselves for uncertainty from this conflict a world away.

“A conflict that can seem so far away at times for many Canadians might hit home in terms of the prices they’re paying for everyday goods,” Mendes said.