Furry bull beasts of the prairie 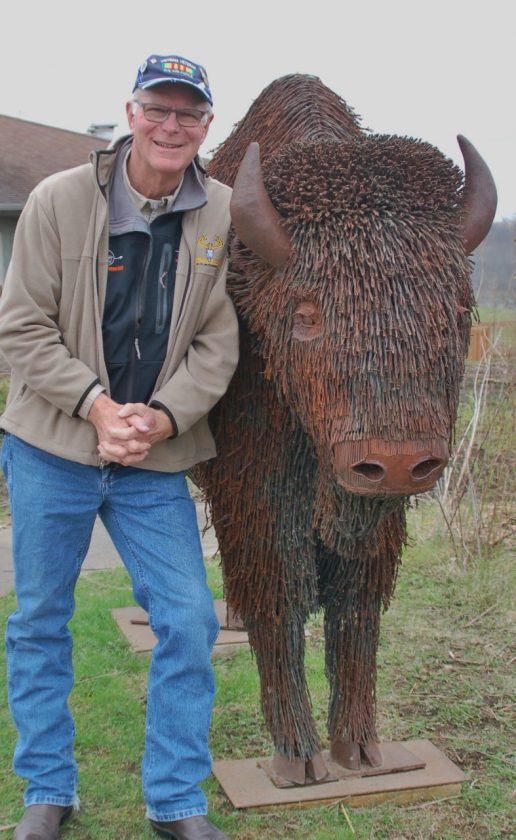 PHOTOS BY HARRY BRANDENBURG. The American bison really lives in its range. In this case, this herd winters, as always, without any difficulty, in the Neil Smith National Wildlife Refuge near Prairie City. Another bison, hand-sculpted by the Warren County Conservation Board years ago, is made from barbed wire on a steel frame. Closer to home, at the Green Castle Recreation Area, a herd of four animals graze on an eight-acre pasture. These impressive animals are reminiscent of ancient times when huge herds of bison grazed on vast natural pastures.

Winter holidays are near. Not too far southwest of Prairie City is the Neil Smith National Wildlife Refuge. The land, originally 3,600 acres, was originally purchased by the Iowa Power and Light Company (now MidAmerica Energy) for the construction of a nuclear power plant. This plant was not built. So what was to become of the earth?

In short, Iowa Congressman Neal Smith championed the idea of ​​replicating the tall grass prairie in the Jasper County hill country. In 1990, the Fish and Wildlife Service was able to purchase the land, and over time additional lots were added from willing sellers, bringing the lot up to 8,654 acres.

Extensive research has been done on local grasslands and plantings to restore, manage and upgrade the site to transform it into a prairie relic with a serious mission. This work continues in an endless effort to improve these native pastures.

Last weekend this scribe made a trip to see bison at Neal Smith NWR. I found about 40 animals on the hillside. They grazed contentedly, as if they had been there for a long time.

Their ancestors lived here a very long time ago—many millennia, in fact, before and largely after the retreat of the last glacial systems. Bison bones, skulls, and Native American tools all testify that bison are one of the majestic megafauna of the Midwest, and even today, bison skulls are found along eroded stream banks, where they resurfaced after being buried underground in for thousands of years.

And while I was watching the bison, I was also watching the moose. Approximately 20 moose can be found on the roadway through the pasture. A tall wildlife fence surrounds about 700 acres where you can watch bison and elk. This time I didn’t find the moose. However, bison were easy to find, so I focused on photographing these animals. My next visit to this NWR will offer new opportunities.

Neil Smith in NWR has the Prairie Learning Center, a nature center dedicated to all things local grassland. Included are displays and information about the soil itself, many hundreds of herbs and/or flowering plants, and an abundance of insects, small mammals, reptiles, and amphibians. Full-sized riding bison can be observed up close, and there is much information about how bison supported the Native American population.

All of them are natural pastures, but differ in that they can survive on soils with less rainfall. Many large animals roamed these meadows. Among them were, of course, bison, and elks, and deer, and pronghorns. Predators followed prey in the natural order of things. The Native Americans survived in part because of the bison and other large animals they hunted. Natural predators included the wolf, bear, coyote, and mountain lion.

Since the settlement of Iowa, about 85 percent of the Iowa landscape has been covered in tallgrass prairie. Thirteen percent was forest and woodland, and two percent was water from rivers, glacial lakes, and wetland complexes. The rich soils of Iowa have led mankind to a wide transformation. The original prairies have largely disappeared.

However, a few isolated remnants continued to survive in the far corners, along the old railroad corridors, or thanks to the foresight of botanists who knew that several patches of local pastures should be found and preserved as nature reserves. Iowa’s native prairies are now less than 1/10 percent of what once existed.

Tallgrass prairies throughout the Midwest provide a variety of wildlife: hundreds of plant species, more than 350 bird species, almost 100 mammals, many amphibians and reptiles, and many fish. The diversity of insects is in the thousands.

Neal Smith NWR is just one of 520 unique habitats and wildlife sanctuaries that call these places home. All land with National Wildlife Refuge is about 93 million acres across the United States.

The mission of NWR Neil Smith is to increase plant and animal diversity through the restoration of tallgrass prairie; increase public awareness and understanding of grasslands; increase scientific knowledge; and provide a variety of opportunities for outdoor recreation.

In autumn and early winter, birdwatching can become a serious hobby. Ask Mark Presholdt of Liscomb. He has been associated with what he calls the Grammer Grove Hawks for many decades.

Grammer Grove is one of the Marshall County Preserves located along the Iowa River about three miles southwest of Liscomb. This 121-acre park features elevated rolling countryside and a flat floodplain. In addition, Grammer Grove offers vantage points for watching the Iowa River Valley, especially in the fall and early winter when migrating predators fly south. Tracking different species at this time of the year adds to the database of hawks, eagles, falcons, vultures and kestrels that follow the river valley during their migration.

In 2021, Mark and fellow counters Ken and Mary Ann Gregory, Phil Tetzloff, Andy Spellman, Diana Pesek, Tom Dougherty and several others visited Grammer Grove from early September to mid-December. They tracked the species of birds of prey they observed in the skies above this park, and their field notes show a wide variety of birds of prey from 299 hours of observation over 67 days from September 8 to December 16. 15 different species were sighted in this 32nd year of local hawk watching.

So which species are on the list? In descending order from largest to smallest, here is the list. A total of 1,798 broad-winged hawks were sighted, followed by turkey vultures (782). Bald eagles were next (611). Red-tailed hawks followed (425) and sharp-nosed hawks (377). hawks 36, northern harriers 29, ospreys 19, American kestrels 11, gyrfalcons eight, peregrine falcons six, golden eagles five, stiff-legged hawks three, red-shouldered hawks two, and Swainson’s hawk one.

As always, there were a few people who were too difficult to identify other than the family group. Among the unknown were several buteos, falcons, eagles and others. All in all, these hardy observers from Grammer Grove saw 4,138 raptors come in for the fourth biggest year. For historical purposes, last year’s largest was 6580.

Peak observation days were 21 and 22 September from 1463 and 225 respectively. On all other days, more or about a hundred birds could be seen. Information about this hawk watch can be found at [email protected] Thank you Mark for sharing your hobby with Outdoors Today readers. Keep up the good work.

Other large birds that receive a lot of attention are bald eagles. They are hard to miss and always impress. Eagles are abundant in Iowa, according to a survey and count conducted in the state every late December and early January. Forty-four states have observers.

In Iowa, the Mississippi River has always been a prime spot for eagle watching to see wintering birds. The resident eagles are joined by other eagles from Minnesota, Wisconsin and Michigan. Eagles can be seen along the entire eastern border of Iowa.

This weekend, the 38th Bald Eagle Day celebration is taking place in the far southeast corner of Keokuk County. Inland, however, bald eagles can be seen anywhere in Iowa. Our tiny section of the Iowa River has several wintering eagles, just like any other major river in the state.

The eagle population trend line grew well in the 1990s and flattened out in the 2010s. Observational data appears to indicate that Iowa may have a population of bald eagles. The number of nests in Iowa is about 500, while Marshall County may have as many as a dozen nests. Look for eagles on nests, next to them, or on them. These territories will be well protected if this nest is active again this year.

District Council for Nature Conservation. He

is an alumnus of Iowa State University

with a bachelor’s degree in fish

PHOTOS BY HARRY BRANDENBURG. The American bison is truly home to its range. In this case, this herd winters, as always, without any difficulty, in the Neil Smith National Wildlife Refuge near Prairie City. Another bison, hand-sculpted by the Warren County Conservation Board years ago, is made from barbed wire on a steel frame. Closer to home, at the Green Castle Recreation Area, a herd of four animals graze on an eight-acre pasture. These impressive animals are reminiscent of ancient times when huge herds of bison grazed on vast natural pastures.