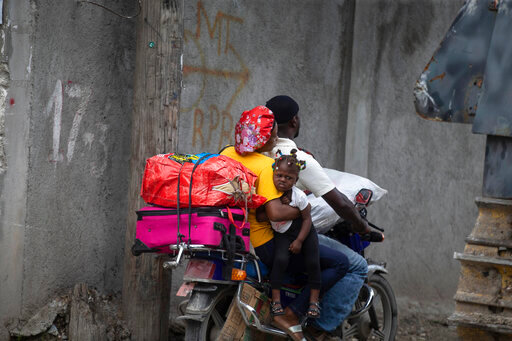 By EVENS SANON and DÁNICA COTO

PORT-AU-PRINCE, Haiti ( Associated Press) — It was about 6 am when Venique Moïse flung open the door of her house and saw dozens of people running — their children in one hand and scant belongings in the other — as gunfire intensified.

Minutes later, she joined the crowd with her three kids and fled their neighborhood in Haiti’s capital as fires burned nearby, collapsing homes where hours later the bodies of nearly 200 men, women and children shot or mutilated with machetes by warring gangs were found alongside skulls and bones of victims set ablaze in late April.

“That Sunday, when the war started, I felt that I was going to die,” Mose said.

Gangs are fighting each other and seizing territory in the capital of Port-au-Prince with a new intensity and brutality. The violence has horrified many who feel the country is swiftly unraveling as it tries to recover from the July 7 assassination of President Jovenel Moïse and the United Nations prepares to debate the future of its longtime presence in Haiti.

Experts say the scale and duration of gang clashes, the power criminals wield and the amount of territory they control has reached levels not seen before.

Gangs have forced schools, businesses and hospitals to close as they raid new neighborhoods, seize control of the main roads connecting the capital to the rest of the country and kidnap victims daily, including eight Turkish citizens still held captive, authorities say.

Gangs are also recruiting more children than before, arming them with heavy weapons and forming temporary alliances with other gangs in attempts to take over more territory for economic and political gain ahead of the country’s general elections, said Jaime Vigil Recinos, the United Nations’ police commissioner in Haiti.

“It’s astonishing,” he told The Associated Press, noting that gang clashes are becoming protracted, ruthless affairs. “We are talking about something that Haiti hasn’t experienced before.”

At least 92 civilians and 96 suspected gang members were killed between April 24 and May 16, with another 113 injured, 12 missing and 49 kidnapped for ransom, according to the UN Office of the High Commissioner for Human Rights. The office warned that the actual number of people killed “may be much higher.”

Gangs also gang-raped children as young as 10 and set fire to at least a dozen homes, forcing some 9,000 people to flee and seek temporary shelter in churches, public parks and shuttered schools, UN officials said.

Haiti’s National Human Rights Defense Network said some victims were decapitated while others were thrown into wells and latrines. Gangs posted pictures of the gruesome scenes on social media to further terrorize people. The network said that most women and girls were raped before being killed.

Read Also:  Circuit-breaker lockdown: what will it look like and how long will it last in the UK? - News Concerns

“Armed violence has reached unimaginable and intolerable levels in Haiti,” Michelle Bachelet, the UN High Commissioner for Human Rights, said in a May 17 statement.

Bruno Maes, UNICEF’s representative in Haiti, told the Associated Press that one growing concern is the lack of access to basic things like water, food and medicine because people remain trapped in certain areas while gangs continue to fight, noting that malnutrition is on the rise, affecting 1 in 5 children in the Cité Soleil neighborhood alone.

“We are really seeing a strangulation of Port-au-Prince,” he said, adding that UNICEF has been forced to use a helicopter and now a boat to try to reach those most in need.

Staff at hospitals and clinics report they’re being stretched thin, with Doctors Without Borders noting that it treated nearly 100 people for gunshot wounds from April 24 to May 7, forcing the aid group to reopen a clinic in Cité Soleil it had closed in early April because of the violence.

Prime Minister Ariel Henry has remained largely quiet amid the escalating gang violence, while Frantz Elbé, Haiti’s new police chief, said dozens of gang members have been arrested and another 94 killed in clashes with police since he took over the department six months ago. Nearly 5,000 suspects have been accused of crimes including murder and kidnapping, Elbé said.

“I am going to continue to track down the criminals,” he pledged in a May 9 news conference, adding that Haiti’s understaffed and under-resourced police department of roughly 11,000 officers for a country of more than 11 million people was receiving training and equipment from the international community.

At least 48 killings were reported in the neighborhood of Butte Boyer, in which Edna Noël Marie fled with her husband and three children when gunfire erupted in late April.

The 44-year-old is sleeping on the concrete floor of a crowded shelter with no mattresses in increasingly unhygienic conditions while her children stay at a friend’s home.

“It’s not big enough to shelter all of us,” she explained, adding that she fears gangs will recruit her two sons and rape her daughter. “These people have no remorse, and society doesn’t really care. … There is no civil protection. There are no authorities. Police are here today, and they’re going to be gone tomorrow.”

About 1,700 schools have shuttered amid the spike in gang violence, leaving more than half a million children without an education, with the director of some schools unable to keep paying gangs to ensure students’ safety, the UN said. Efforts are underway to set up an FM radio station dedicated to broadcasting classes, Maes said.

“It’s very saddening for us that children who are willing to learn and teachers willing to teach cannot do so because they feel unsafe,” he said.

The ongoing violence and kidnappings have prompted hundreds of Haitians to flee their country, often a deadly move. At least 11 Haitians died and 36 others were rescued when their human smuggling boat overturned near Puerto Rico this month. Dozens of others have died at sea in recent months.

Another concern is the lack of housing not only for the estimated 9,000 families recently forced to flee their homes, but also for the estimated 20,000 others displaced last year who are still living in overcrowded, dirty government shelters. At the same time, the country is struggling to help roughly 20,000 Haitians the administration of US President Joe Biden has deported in recent months amid sharp criticism.

Several walls and gates were scrawled with “400 Mawozo,” a testament to the presence of a gang believed to have kidnapped the Turkish citizens in early May and 17 members of a US-based missionary group last year, demanding $1 million in ransom and holding most for two months.

Nailed to a wooden post, a picture of a man killed during the recent gang violence flapped in the wind. The sign underneath read, “Thanks to the government of my country.”

It was once a quiet neighborhood that Lucitha Gason, 48, knows she won’t return to again. She was getting ready for church when the explosion of gunfire in late April forced her to abandon her home. She’s been staying at a shuttered school, but the owner recently demanded that she and dozens of other Haitians find another place to sleep.

Gason is now trying to figure out where to go since she can’t afford to leave the country.

Your money: how to avoid tax fraud during the filing of documents