Giammattei: America and the private sector’s work that allowed us to “do our job” 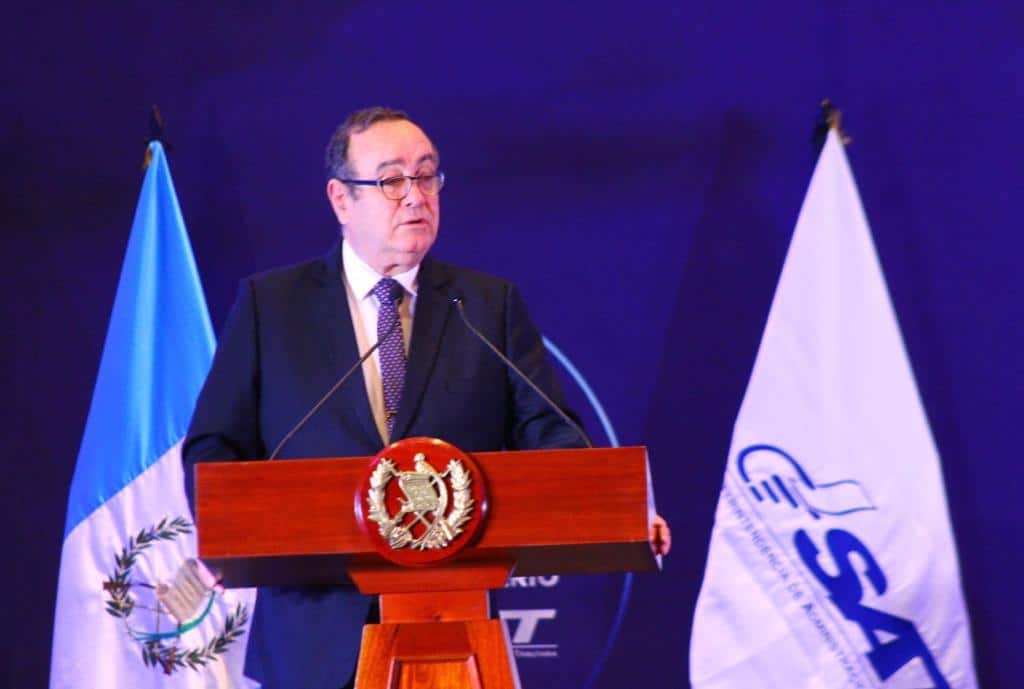 President Alejandro Giammattei participated in the Accountability of the Superintendence of Administration (SAT), held this Wednesday, January 11, in which he recognized the work of the United States Embassy and the private sector in strengthening customs checkpoints. ,

Giammattei pointed out that work is underway to improve infrastructure along the borders with El Salvador and Honduras. As a goal for this year, he proposed modernizing and building up to streamline procedures and combat smuggling.

In this sense, the President stressed: “We have to recognize the participation of the American Embassy, ​​but also of the private sector which has helped us to get the equipment, get the premises and do their job.”

He explained that it is demanded that those who register their customs declaration in advance “do not waste time”, similarly those who travel by car the whole process takes 7 minutes.

The goal is to modernize the entry gates at the seven borders, for which four lanes will be built, the necessary infrastructure and the area to avoid traffic of people “exchanging money, paying bribes, doing paperwork”. will be nullified”.

On various occasions, Giammattei has highlighted the ties that his government has with the aforementioned North American country, even as La Hora in recent months has shown a change in tone regarding its actions.

Several times during 2022, he highlighted each country’s sovereignty and respect for it, and even pointed to interference by the US in internal affairs, as “Giamattei has changed his tone and strategy with the United States”. Replaced” said the note titled.

Further, with respect to the restrictions on the Angel List, a change in position has been observed in some of the announcements. For example, in May last year, he gave a speech mocking that system and said he would also create his own list of “Guatemala’s enemies” and call it the “Zopilote list”.

However, given the sanctions announced in November 2022 against Dmitry Kudryavkov, Irina Litvinyuk and national mining companies for alleged acts of government corruption, the government argues that they are due to the “close” work of the two countries and transferred the case under consideration. Ministry of Public Affairs (MP) for due process.

tie-up with the private sector

Similarly, it has highlighted its tie-ups with the private sector. In September 2022, he highlighted that when his administration began, he approached her to give her a check for US$1 million and she assured that she did not want to receive it, but rather a response to the needs of the state. Sent list.

Thus, according to the President, five hospitals were financed in five months. He said that since there was money left, three lists were provided to utilize the entire money.

These were the president’s statements in the SAT Accountability Act of 2022.

Also on that occasion, he was proud to have signed the public-private agreement “Guatemala Don’t Stop” and invited investors to be part of it together with the country’s brand.

“There’s No Excuse Other Than Incompetence”, Says Giamattei

In activity, Giammattei said that in the three years of his government, records for available cash balances have been broken. According to Finance Minister Edwin Martinez this year it is close to Q12 thousand 200 million.

The ruler said that there is “no excuse other than inefficiency” for Guatemalans not to reflect their taxes in work that contributes to health, education and mobility, as both the ministry and the development council are already implementing their budgets. have been

Under this narrative, he held a precedent of what happens when the government “respects the autonomy” of decentralized institutions, as is the case with the SAT.

Likewise, the Superintendent of Tax Administration, Marco Livio Diaz Reyes, mentioned that tax collections this year reached Q75 thousand 999.6 million compared to the set target of Q87 thousand 929.8 million. That is, 15 percent more than what was installed.

During the SAT 2022 Accountability Act, President Alejandro Giammattei noted in his speech that the tax target set in 1996 was achieved this year without new taxes and tax reform.

Also the tax burden reached 12.1 percent with a surplus of Q11 thousand 929 million. With this percentage, it was possible to reach the tax burden target established with the peace accords in 1996.

Giammattei insisted that this objective was achieved without any tax reform or higher taxes.