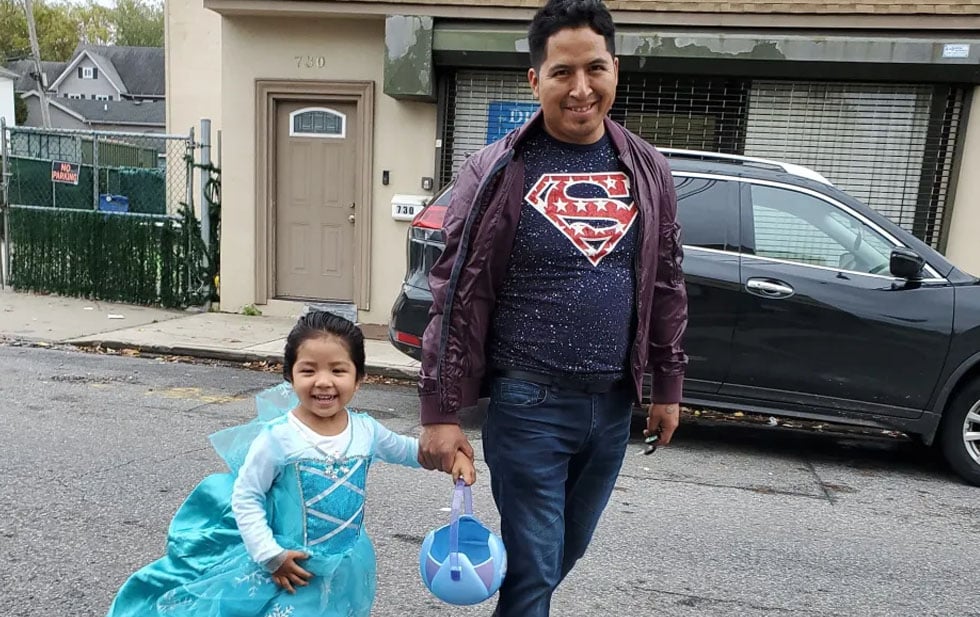 New York. – Aaliyah is barely 6 years old, and although her life was full of happiness and much love in the home she shared with her “daddy”, Julio Patricio Gomez, on the morning of October 14, being so young, Things turned upside down for him and his Ecuadorian family.

‘La Migra’ arrived at his home in Staten Island, and after telling the construction worker that he had a deportation order issued against him since 2010, they arrested him and held him at the Moshannon Valley Processing Center Detention Center in Pennsylvania took away. Where more than 900 immigrants are currently being denied their liberty.

Despair, sadness, anguish and immense pain to be separated from her “Daddy” have gripped the little girl, who was wanted in the midst of her innocence, with her aunt recently, before Christmas, with her father in the detention center to live in. Alia didn’t want to be away from the Ecuadorian, who is a single father and sole caregiver of his daughter since she was only 1 year old.

USA born Aaliyah is very sad and with her childish words she only asks Immigration and Customs Enforcement Service (ICE) to relocate and release her father soon. She wants to play with Patricio again; He wishes that everything was the way it was before October and that his “daddy” would come back.

“I feel sad because I can’t see my dad. We went to Chuck E. Cheese together, soccer together, and we went to Legoland together. I always wanted to go to Legoland first and he took me. My daddy Release her so she can stay with me,” said the little girl, who is currently in the care of other relatives. “I love you daddy,” the little girl added to some of the pictures she made for her father, along with images from the movie Frozen and wished the situation had a happy ending.

Rosa Gomez, the older sister of Alia’s father, wept as life for the family, originally from Azogs, Ecuador, had become a nightmare since ICE took Patricio, and urged immigration officials to Think of the damage an arrest is doing to an exemplary father to the little girl and the rest of the Gomez family.

“We are living in a very ugly moment. We cannot recover from detaining Patricio. There is not a second of peace. It is very painful and it breaks our heart to hear the girl say: ‘I I love my daddy, I love my daddy,” said the grieving aunt. “I ask all the lords (authorities) to get my brother out of there. My brother is not a bad person, a good worker, a good citizen. This is someone who has been paying taxes forever. I ask you to help us as we are all suffering”.

Gomez’s sister said that the arrest of the father of the family has also affected their 68-year-old mother, who is in great pain.