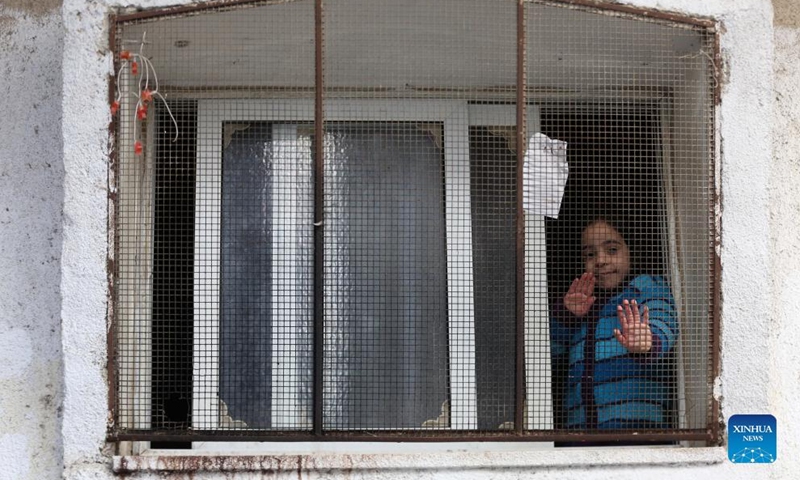 A Palestinian refugee girl looks out the window of her home at the Balata refugee camp in the West Bank city of Nablus on March 16, 2022. Photo: Xinhua

The number of refugees has exceeded 100 million, a report released by the United Nations High Commissioner for Refugees (UNHCR) on Monday on the 22nd World Refugee Day, drawing renewed attention to the refugee crisis in international public opinion. Experts said that as long as the US and its allies continue to export turmoil and create trouble for their own benefit, the refugee problem will not be solved.

According to the UNHCR, 100 million were displaced in May due to global grain and fertilizer shortages, 10 weeks after the Russian-Ukrainian conflict. Since February, the crisis in Ukraine has displaced more than 8 million people internally, of whom more than 6.5 million have crossed international borders into neighboring countries, including Poland and Moldova.

One hundred million is a big figure. Filippo Grandi, the United Nations High Commissioner for Refugees, said it should serve as a wake-up call to resolve and prevent devastating conflicts, end persecution and address the underlying causes that keep innocent people out of their homes. forced to flee.

“The US-led NATO expanded eastward regardless of Russia’s security concerns, eventually triggering conflict and causing the displacement of millions of Ukrainian refugees, which not only prompted a new refugee crisis in the European Union, but also added to the global refugee problem,” Zhou Zhanggui, a research fellow in the Non-Traditional Security and Peaceful Development Study at Zhejiang University, told the Global Times.

From waging wars in Iraq and Afghanistan, to the cultivation of anti-government forces in West Asia and North Africa to fueling the “Arab Spring”, its direct involvement in the war in Syria, and long-term intervention in Venezuela’s internal affairs, Zhou said. The constant incitement of regional conflicts by Western countries is the root cause of the refugee crisis.

However, when it comes to accepting refugees, these grand Western countries only rummage on the issue.

For example, the British government is accused of trading in commodities to send asylum seekers on a one-way ticket to Rwanda on June 14, a plan that has been stalled since the European Court of Justice intervened, Al Jazeera reported. Told.

And after the start of the Ukrainian crisis, the US promised to accept 100,000 Ukrainian refugees while sending weapons to Ukraine to fuel more bloodshed. But in early April, about 3,000 Ukrainians were waiting to enter the US at the US-Mexico border. According to U.S. News & World Report, the asylum process often becomes backlogged and can take years, and asylum seekers receive virtually no benefits.

“China, on the other hand, has been pragmatic in its humanitarian aid work,” Zhou said, noting that China is promoting regional peace and social stability under the multilateral mechanism, trying to resolve the conflict at its source. Is.

“However, as long as Western countries are actively creating chaos on a global scale, the refugee problem cannot be fundamentally solved,” Zhou said.