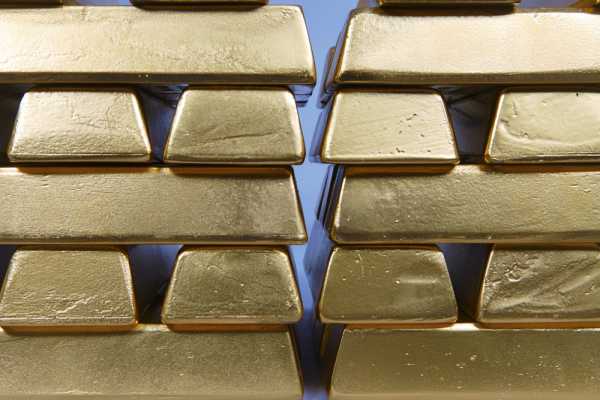 Clearly, the gold line is gold, with the anticipated geopolitical spike and fade giving it away. But you can get stuck as the second row down WestPalmBeachers, which is green in color (hint hint, wink, nudge…).

And, ah, we have a winner! That’s right, Bunkie (from Boynton): the world’s “reserve currency,” as measured by the ‘Dixie’ dollar index, is the almighty Buck. Over these past 36 trading days, both gold and the dollar are up a net +4.2%, which is impossible for the conventional wisdom crowd. Of course, you regular readers of The Gold Update fully understand that Gold is not a currency favourite. And repeat, voice! For Dixie, it traded above 100 on Friday for the first time in five years (a brief pre-2020 COVID spike).

Exclusive to this week’s title, “Sleep takes a snooze as the volume cools”, which seems obnoxiously 180° out-of-phase given these five basic realities:

Gold positive, one and all. So, the price has to be on the upside, right? But “should” is not “is”. Rather, these past five days saw gold’s old record – in points or percentage terms – its second narrowest trading week of the year, a range of just 36 points within the “expected” trading range for the final week of 68 points. ; Also the week’s total contract trading volume was the fourth-lowest year-on-year. “…zzzzzzzzzz…”

Thus from that technical reality, ‘it is fair to say that there should be nothing’.

As we look at lots from a year ago to today, nothing like this is reflected in the comparatively wee weekly bar of gold below. Twice Gold’s fourth straight week to record a “lower high”; Thus perhaps under the cover of the fresh parabolic short trend according to the two red dots, a slight bounce is near: