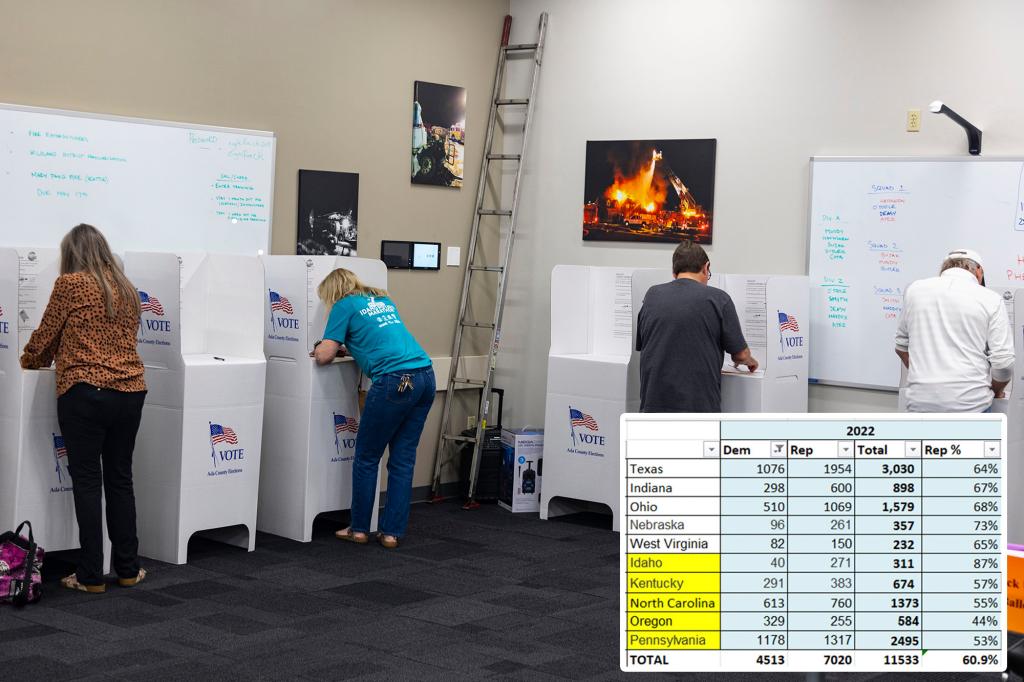 Republican primary voters showed up in droves to take part in Tuesday’s contests, a good early sign for GOP hopes to regain the House and Senate this fall.

As of midday Wednesday, Republican voters made up 54.9% of the turnout in Idaho, Kentucky, North Carolina, Oregon and Pennsylvania, according to data compiled by JMC Analytics & Polling.

That figure jumps to 60.9% of turnout when all 10 states that have held primaries so far this year are included.

“In every state where I’ve been measuring turnout changes relative to previous midterms, I’m seeing a clear advantage on the Republican side,” JMC Analytics founder John Couvillon told The Post, adding that the picture was the exact opposite in 2018, when Democrats took control of the House with a net gain of 41 seats.

While Couvillon focused that 10 primary elections are “not super representative” and noted that while there are still 174 days before voters go to the polls Nov. 8, the current data suggests “states that are swinging and are Republican are going to move far to the right.”

So far in 2022, overall voter turnout is up 13% from 2018, JMC Analytics has found. That number is driven by an approximate 30% increase in Republican voter turnout, while Democratic turnout is down 6%.

Of the 10 states that have held primaries so far, the only one where Republican voter turnout has dropped from 2018 is Oregon, where JMC reported a 23% decrease. Democratic voter turnout increased by 12% in North Carolina and 15% in Pennsylvania, but was dwarfed by Republican increases of 44% and 32%, respectively.

Democratic turnout also dropped 29% from four years ago in the former battleground state of Ohio.

For months, the GOP has predicted a so-called “red wave” in the 2022 midterms, taking advantage of an unpopular president, decades-high inflation, record-setting gas prices, and spikes in violent crime and illegal immigration. Perhaps sensing an uphill battle, 32 House Democrats have opted not to contest their seats again this fall.

Other Democrats, such as Sen. Elizabeth Warren (D-Mass.), have warned the party could lose its majority absent drastic action.

“I think we’re going to be in real trouble if we don’t get up and deliver. Then I believe the Democrats are going to lose,” she said last month. “Democrats win when they do what? When they work on behalf of working people. We can’t just rest on what we’ve already done. We need to be fighting going forward.”

“What I saw last November, if a jurisdiction voted about, say 55 or 56% for [President] Biden, that’s kind of a firewall in terms of a Democrat can feel safe,” Couvillon said. “If it’s in that 55-56% or less category, that’s where the Democrats have to worry about.”

While several races have been called in Tuesday’s primaries, all five states still have tens of thousands of votes left to count and the final turnout tallies will likely not be verified for weeks.

In Pennsylvania’s Allegheny County, for example, voters will not see updated results until after Friday morning, when the county Return Board next convenes.

JMC Analytics has projected that in the Idaho, Kentucky, North Carolina, Oregon and Pennsylvania primaries, Republicans will ultimately account for approximately 53.4% ​​of voter turnout while Democrats will have approximately 45%.

The next chance Democrats have to show up Republicans in voter turnout will be May 24, when voters in Alabama, Arkansas and Georgia head to the polls.