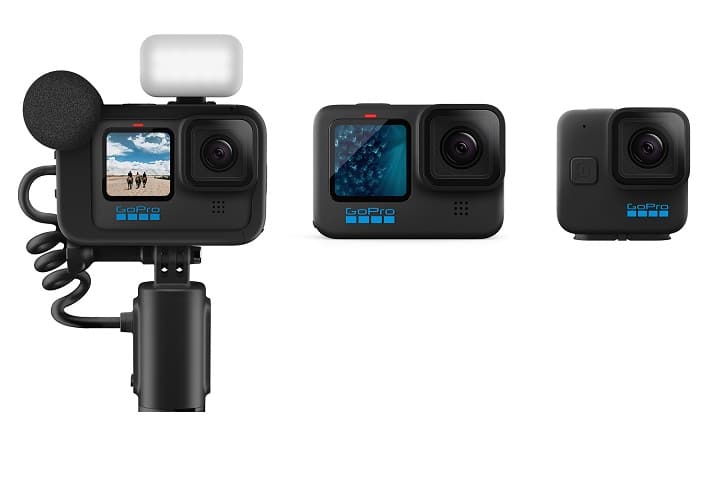 The three new GoPro cameras also feature the highest 10-bit color depth, the highest level of video stabilization, and the widest field of view ever in a HERO line of cameras.

Each of the three new GoPro HERO11 Black cameras is designed to appeal to consumers in different ways, to meet their specific needs.

This results in 64X more colors being captured in 10-bit video than 16.7 million colors in 8-bit, a staggering leap forward in image quality.

The new, larger HERO11 Black sensor can shoot video at an 8:7 aspect ratio for the largest vertical field of view ever seen on a GoPro. This means that you can now capture more of the scene vertically and can choose from a variety of different aspect ratios in the GoPro Quik app—perfect because you can now create extra-tall 9:16 vertical shots for Instagram and TikTok, plus the high resolution 16:9 cinematic shot is ideal. for YouTube or the big screen. You can also zoom in on the best parts of your video to create high-resolution closeups all at the same time.

The new sensor also enables HyperView, the widest 16:9 field of view ever on a HERO camera. Ideal for recording first-person views of your cycling, skiing, surfing, motorcycling and other activities, HyperView will make your favorite activities look more dynamic and more heroic than you ever imagined.

HERO11 Black can be obtained in Indonesia starting September 15, 2022 at a price of Rp. 8.8 million via URBAN REPUBLIC, and the first 100 buyers in Uban Republic will get an exclusive T-Shirt and the HERO11 Black Creator Edition will follow in early October 2022. Meanwhile, HERO11 Black Mini will be available at the end of October 2022.

Gopro HERO11 Distributed by Changhong IT, Indonesia as an official distributor in Indonesia.