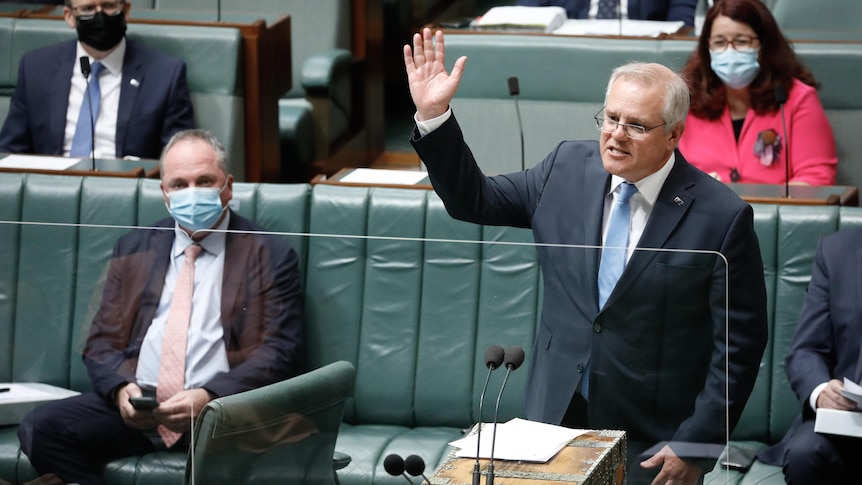 Conflict within the Coalition on climate policy has made it harder for public servants to give frank advice about preparing for worsening weather extremes like floods and fires, according to the sworn testimony of a senior bureaucrat.

The comments came in July last year during the Coalition’s legal attempt to maintain secrecy over climate scenarios “war-gamed” by some of the top bureaucrats in the country.

Under “Project Climate Ready”, the scenarios were mapped out in 2018 in anticipation of the kinds of major disruptions expected from climate change, by a now-defunct group called the Secretaries Group on Climate Risk.

In 2019, the ABC obtained some documents relating to the group’s activities, but details of the scenarios were not released.

The ABC fought the decision to withhold the documents at the Administrative Appeals Tribunal (AAT) but was unsuccessful.

The ABC is not going to appeal the decision in the Federal Court, so is now publishing the revelations from last year’s hearings.

In testimony before the AAT last year, the deputy secretary of the Department of Industry, Science, Energy and Resources, Jo Evans, said the release of the scenarios would be against the public interest.

She said the policy area was so “contested”, that secrecy was required for the public service to be able to do its job.

The topic of climate policy was so “sensitive”, she said, that “even the existence of the Secretaries Group on Climate Risk had for some time been sensitive.”

Ms Evans said the in-fighting between Prime Minister Scott Morrison and Deputy Prime Minister Barnaby Joyce over whether Australia should aim for net-zero emissions was an example of how contested the topic was.

Do you know more about this story? Email Specialist.Team@abc.net.au.

Ms Evans argued that in order to continue giving the fearless advice they were giving, the public service needed to maintain confidentiality over the scenarios, which were part of a deliberative process.

In its ruling, the AAT agreed with Ms Evans, finding that the release of the documents “may inhibit the [public service’s] ability to develop and progress policy proposals”.

In 2018, the Secretaries Group on Climate Risk was told in a “context paper” prepared by public servants that extreme weather was already “overwhelming” the country’s ability to respond to climatic events, meeting minutes obtained by the ABC show.

That was before the Black Summer bushfires of 2019 and 2020 or the various east coast floods this year.

In 2018, when the Secretaries Group on Climate Risk was operational, Cheryl Durrant was director of preparedness and mobilization at the Department of Defense.

She helped create the secret scenarios that were used by the group.

“I don’t think there’d be a problem in them being released,” said Ms Durrant, now a member of the Climate Council.

She said she wasn’t surprised by the testimony at the AAT, but she was “appalled” at the position the public service had been put in.

“The best tradition of a public service is the ability to give free, frank and transparent advice to government,” she said.

“It’s… another piece of evidence that suggests that the public service has become highly politicised and thus unable to do its job of giving frank and fearless advice to government.”

Scenarios of Australia being ‘overwhelmed’ by extreme weather

Joelle Gergis, a climate scientist at ANU, said not much creativity was needed to guess what sorts of scenarios the group might have been wargaming.

“We don’t really need to use our imaginations to think about this. I think we’ve had two really clear and stark examples in just the last handful of years,” Dr Gergis said, pointing to the Black Summer bushfires and the 2022 floods.

She said the conditions that led to the Black Summer bushfires would be average conditions by 2040, and 20 years later would be cooler than average.

“It’s sort of like a terrifying glimpse into the future of what we’ll be looking at when we’re talking about increased global warming.”

Dr Gergis said she was saddened to hear that the contested nature of climate policy made it hard for public servants to work on the issue.

“I think it’s deeply concerning and I think that at the end of the day, physics doesn’t actually care about the political cycle or political infighting,” she said.

The scenarios have been kept secret, but in commissioning them, the documents show the group said they “could include modeling a spring at 10 degrees (Celsius) above average” and “relate to concurrent extreme weather events, legal liability, national security or health “.

They said the exercise would involve planning for the scenario over a period of “15 to 20 years”.

The group noted Project Climate Ready should help the government “identify actions and prompt discussion on what decisions need to be taken to build resilience to climate change, by who, and when.”

In addition to direct physical risks impacting health and national security, the group also considered legal risks that climate change could pose for the government.

Ms Durrant said releasing the documents was important for democracy.

“Isn’t that the point of democracy, that there should be an open and honest public debate about issues of relevance to Australia?”

In 2019, a for the Department of Environment told the ABC the work of the Secretaries Group was now being done by a more junior deputy secretary-led group, called the “Disaster and Climate Resilience Reference Group”.

A spokesperson for the Morrison government said the Coalition’s position on climate change “is clear with a firm commitment to net zero by 2050”.

“The Morrison government has worked closely with departments in formulating and implementing strategies,” the spokesperson said.

The Department of Agriculture Water and Environment was also contacted by the ABC.

Why is everyone talking about graphite and which stocks in ASX have exposure to?

Home prices have fallen but these suburbs are bucking the trend