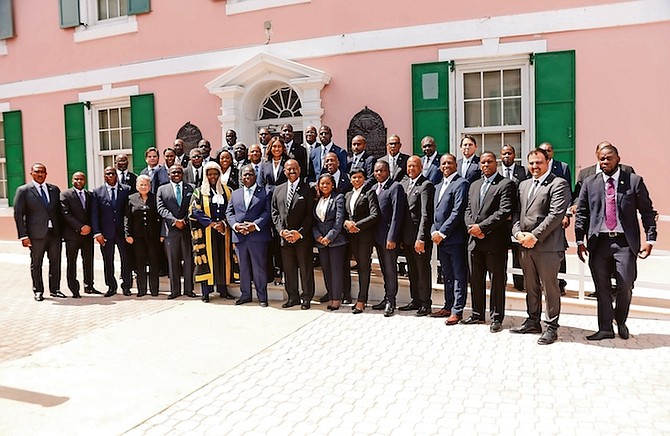 MEMBERS of Parliament outside the House of Assembly yesterday. Photo: Donavan McIntosh/Tribune Staff

SEVERAL COVID-19 restrictions were relaxed yesterday, signaling a closer return to normal for the country as virus cases continue to trend downward.

Prime Minister Philip “Brave” Davis announced the changes as he underscored his administration’s commitment to reopening the economy that was nearly crippled by the COVID-19 pandemic.

While the government had previously announced it had reduced testing requirements for visitors — ending the day five post-travel antigen test requirement and replacing it with a departure test only – Mr Davis said cruise ships now no longer need to present a passenger and crew manifest disclosing vaccination status.

He also said residential care establishments are now able to set their own parameters for visitors and salons and barber shops and spas will now be allowed to operate at 50 percent of seating capacity.

Mr Davis said these events will not require submissions for review and approval by the Advisory Committee and restrictions surrounding large events also will be eased.

He said the Ministry of Health was expected to provide more comprehensive details regarding the loosening of restrictions.

The Prime Minister said his administration had taken a different approach to navigating the pandemic when compared with the previous Minnis administration. He pointed to the removal of the curfew, ending Emergency Powers Orders and opening schools among other changes since his administration was elected to government last September.

“Our administration has taken a very different approach than the previous one,” he said in Parliament. “We immediately ended the curfew, because the data to justify it just didn’t exist. Businesses were able to open for longer hours – this had a significant impact for certain sectors of our economy, as well as restoring important civil liberties to our people.

“And, by ending the Emergency Orders and using regular legislation, we brought the decision-making back to a deliberative, representative body, instead of having all that power reside with a single individual. We have conducted tens of thousands of free COVID tests and we are distributing medical grade masks; both of these are important tools in limiting COVID transmissions.

“We hired more nurses to help us prepare for (the) crisis. By rationalizing the travel sector requirements, and eliminating the travel health visa for Bahamians, obstacles to international and domestic tourism were removed.

“By working closely with health professionals and relying on scientific advice, we have been able to safely re-open schools. And by maximizing all available resources to repair and refurbish those school buildings which had fallen into a terrible state, we were able to open schools without delay.”

He also said: “Our hotels are filling up. Our businesses are open. Many Bahamians are back at work and our children are back in school.

“This is progress, and indeed our economy has already begun to show promising signs of revival. We are proud that our country has made such significant progress over the last few months despite the Delta and Omicron variants, and we are grateful to the thousands of Bahamians who worked hard to get our country back on track again,” Mr Davis said.