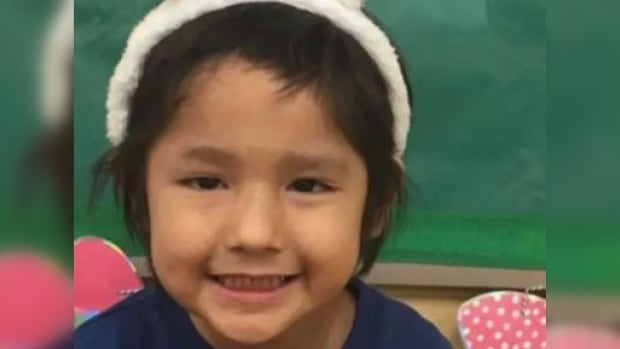 It’s now Day 28 of the search for a missing five-year-old boy from Red Earth Cree Nation.

Frank Young’s grandmother Teresa Whitecap was in tears on Monday while addressing the public during a news conference organized by the Federation of Sovereign Indigenous Nations (FSIN) in Prince Albert, Sask.

In an emotional statement, made while surrounded by family, Whitecap shared how difficult recent weeks have been and thanked people for their ongoing support.

“The family is overwhelmed with worry and grief,” said Whitecap.

“My family are very strong. And the reason that we are strong is because we come together as one.”

Frank was last seen outside his home in Red Earth, about 300 kilometers northeast of Saskatoon, on the afternoon of April 19. He was also seen at a playground in the northern part of the community.

Support messages from around the country and world

Whitecap said Monday it was very difficult for the family to speak publicly, but it is important to talk about the past four weeks and the impact on the family.

“Frank was creative, he was fun-loving,” said Whitecap. “Frank used to love playing outside with neighborhood children.”

The child was in a Head Start program and took pride in making things for his caregiver and aunt while attending the program, said Whitecap.

At the time Frank went missing he was living with his aunt and uncle. The boy’s parents live at the Shoal Lake Cree Nation.

The day he disappeared, everybody jumped into action right away, and the whole neighborhood joined the search, said Whitecap.

Eventually RCMP was called for support, she said.

“I just want to say thank you, thank you to all the volunteers that have come out to Red Earth [Cree Nation] to help look for Frank, the technical people that brought their stuff in to help with the search by land, air and water.”

It has been overwhelming to see all the support from people, with messages of thought on social media coming from as far away as Australia, said Whitecap.

“I pray for all the searchers, all the people that are in our circle,” said Whitecap.

“I pray and I pray, asking our Heavenly Father to guide the searchers, to bring Frank home to us.”

As of Monday the search has included over 611 volunteers and 13 search and rescue crews, he added.

In addition, they are awaiting a response from the Rangers, a sub-component of the Canadian Army Reserve, for additional support, he said.

“Despite this being Day 28, we still see this mission as a rescue mission,” said Fabian Head.

“Today we are still telling people to be courageous as well as to be mindful,” said Marcel Head.

“We won’t quit. We’re not going to give up until we find little Frank.”

While many First Nations, Tribal Councils, neighboring communities, volunteers and organizations have assisted in the search, the FSIN now calls on the provincial and federal governments to send more help.

“We want to do a call out, and a request, and an expectation to Prime Minister Trudeau and Premier Scott Moe to support us, to send your resources, to send the army, the Rangers,” said FSIN Chief Bobby Cameron.

“There was a lot of fatigue that has transpired the last month on the searchers.”

She also called on other First Nations across Canada.

Shoal Lake Cree Nation Chief Marcel Head said there is need for financial resources from both levels of government to cover the costs of the search, including gas to run the vehicles.

After Monday’s Question Period, Saskatchewan Premier Scott Moe told journalists that the province would do what it can to help.

“There have been additional resources provided thus far through requests from the RCMP as well as the involvement of the SPSA, the provincial Public Safety Agency,” he said.

“If these additional requests are required, ultimately, you know, we will endeavour to do what we can do to provide those.”